In the United States today, large "utility-scale" solar power projects account for more than 4,700 megawatts of electricity-generating capacity. And 27,000 megawatts of large-scale solar are under development, which means that the industrial-solar sector is on its way to providing enough electricity for more than 5 million homes.

These are impressive numbers, but the question now is: Will this growth continue? Much of the expansion of utility-scale solar power -- which consists of large, ground-mounted arrays of photovoltaic panels or another technology called "concentrating solar power" -- has been due to two factors: state renewable energy portfolio standards that require utilities to produce a certain amount of green energy, and federal tax credits set to be sharply reduced at the end of 2016.

As the overall solar industry pushes past 10,000 megawatts of installed power by the end of the year -- including PV panels on the roofs of homes and businesses -- some states soon will begin to achieve renewable energy targets mandated by state portfolio standards, which could dampen demand for utility-scale solar projects. Given that and the uncertainty over federal tax credits, will the large solar plants starting to dot the Southwestern U.S. and elsewhere keep cropping up? Or will utility-scale solar fizzle out even as the need to push all forms of renewable energy forward becomes more urgent?

What's next for utility-scale solar

Some renewable energy experts say the future of utility-scale solar is far from assured, in part because they believe distributed solar -- meaning panels on individual buildings -- will become increasingly dominant as the price of PV panels continues to fall.

Other analysts say that both distributed solar and utility-scale solar will play an important role in U.S. electricity generation. Today, solar power is just 1 percent of the total installed electricity capacity in the U.S. But experts believe that several trends could solidify the position of industrial-scale solar going forward. The first is the rapidly declining cost and increasing efficiency of photovoltaic and other solar technologies. The second is the likelihood that state and federal policies -- including renewable energy portfolio standard (RPS) mandates, which now exist in 29 states and the District of Columbia, and a major federal tax incentive -- will be extended or expanded. 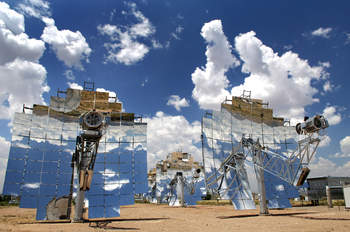 In addition, the federal government has big plans for utility-scale solar. The U.S. Department of Energy's SunShot Initiative, an effort to bring the cost of solar down, projects a scenario where costs continue to drop dramatically and 329,000 megawatts of solar power are integrated into the power supply [PDF] by 2030, representing 13.8 percent of total electricity demand in the U.S. Of that, the Department of Energy estimates, 209,000 megawatts, or almost two-thirds, could be utility-scale solar if prices for solar technology continue to fall.

"Ultimately, the real beauty of solar is that every building, every car park is covered," said Dan Kammen, a professor of energy at the University of California, Berkeley. "So in the decades ahead, we'll go to more and more distributed. But to enable the transition, I think we will see more of these bigger facilities still being installed."

According to Cory Honeyman, a solar analyst at GTM Research, utility-scale photovoltaics alone accounted for only 0.25 percent of the total U.S. electricity capacity at the end of 2012. By the end of 2016, he says, that number will jump to 1.6 percent, more than a 500 percent increase.

Building big solar is expensive and tough, as projects face significant regulatory hurdles. Large solar plants such as Ivanpah, Solana and the California Valley Solar Ranch are getting built in a few states because it is financially feasible based on existing policies. "Utility companies don't tend to do these things voluntarily," said Martin Pasqualetti, a professor and expert on energy policy at Arizona State University in Tempe.

Today, utility companies generally buy the power from big solar plants to fulfill RPS mandates. California, for example, is requiring that 33 percent of the state's electricity needs come from renewables by 2020. Utilities can take a significant chunk out of their RPS mandates by buying all the power produced at a 100-megawatt plant, as they're doing at numerous installations in the sunny parts of the country, including California, Nevada and Arizona. 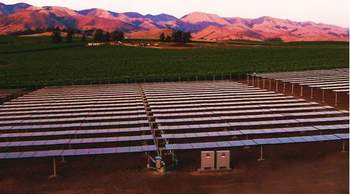 The utilities are buying up that power to avoid substantial financial penalties. "These RPS standards with penalties for non-compliance created this demand," Honeyman said.

Because the utilities have an incentive to buy the power, the solar plants' developers can secure financing to build them. The high-profile, 377-megawatt Ivanpah plant -- ramping up to full capacity in California's Mojave Desert right now -- cost $2.2 billion, and other big projects are similarly expensive. Major loans from the Department of Energy help many of them pay those lofty costs.

The other policy helping the projects along is the federal investment tax credit, or ITC, which offers a 30 percent credit for facilities that come online by the end of 2016. But what happens if the tax credits are not extended and RPS mandates are fulfilled -- and potentially not extended or amended?

Those policy shifts are the backdrop for the fact that the impressive pipeline of projects under construction or development is starting to run out of steam. Honeyman, of GTM Research, said that the slowdown is happening faster than anticipated. Some of the largest projects listed by the Solar Energy Industries Assocation (SEIA) -- such as the 1,200-megawatt Sterling Project and the 750-megawatt McCoy Solar Energy Center, both in early development stages in California -- have no entry under "electricity purchaser." A project that can't promise an opening date before 2017, when tax credits are scheduled to drop to 10 percent, may struggle to find a purchaser for its electricity.

Up on the solar rooftop

Rooftop solar faces fewer uncertainties and is expanding rapidly, with 488 megawatts installed in 2012, 62 percent more than the previous year. Individual incentives at the state and federal level, along with innovative solar leasing models where a building or house owner pays nothing up front, are pushing rooftop solar along just fine. But utilities generally aren't enthusiastic about such "distributed generation," because they make no money off those sources of power.

"Ultimately we're likely to see solar as very distributed, because we might as well take advantage of our urban landscape and cover our built surfaces," said Kammen, who frequently has testified to Congress on renewable energy issues. "But utilities are much more comfortable with large, central station power plants, and they demonstrate again and again that they're not really that well positioned … for distributed solar."

Many utilities themselves are cautious. In California, San Diego Gas & Electric has signed renewable energy contracts totaling around 1,750 megawatts of power generation since 2011, but a spokesperson for the utility says only that it will "meet or exceed" the 2020 RPS mandate and that further renewables procurement may focus more on energy efficiency efforts, energy storage or "more traditional types of generation."

No need for concern?

But developers of utility-scale solar say they aren't particularly worried, citing both dropping costs of solar and optimism that state and federal incentives will continue. "Renewable portfolio standards have always been the biggest driver of utility-scale solar development, and we're cautiously optimistic that we will see these standards continue to be raised across the country," said Steve Schooff, director of communications for California-based Sempra U.S. Gas & Power, a developer with more than 300 megawatts of utility-scale solar in operation and hundreds more in development. He added that some states such as Nevada are looking into early retirement of coal plants, with solar among the replacement technologies. 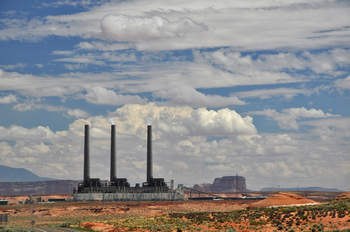 Other developers are counting on the ongoing price drops to render the RPS mandates moot. "The market for ground-mounted solar PV systems will continue even after the RPS policies are exhausted," said Martin Hermann, CEO of 8minutenergy Renewables, a developer with 2,000 megawatts of solar in California scheduled to come online by 2016. "This is due to the fact that PV will continue its long-term price decline."

The significance of cost parity

In October, Colorado utility Xcel Energy decided that some big solar and wind power plans were the best choice based on price alone, regardless of state renewable portfolio standards. Many experts agree that the steep drop in photovoltaic panel costs [PDF] over the last decade will continue, meaning true cost parity for solar -- compared to natural gas or coal -- can be achieved in the next few years.

Stefan Reichelstein, a professor at Stanford University, said cost parity with natural gas is more likely to arrive in a decade or so. As a result, the industry will make an argument that "extending the federal subsidies for a number of years beyond 2016 will be essential in order to preserve the pace of new installations," he said. Jared Blanton, a spokesperson for Ivanpah co-developer BrightSource Energy, said even a tweak of that federal tax credit to allow projects to simply "commence construction" rather than enter into service by 2016 would boost the utility-scale solar market.

One recently approved California policy also will help support the utility-scale solar industry. The nation's first energy-storage mandate [PDF], requiring utilities to purchase 1,325 megawatts of energy storage by 2020, is a natural fit for large solar plants. Facilities that use concentrating solar power -- which involves mirrors focusing light on a pipe or central tower to create power-generating steam -- can incorporate significant storage solutions relatively seamlessly. Abengoa's Solana plant in the Arizona desert features molten salt storage that allows the plant to feed power to the grid for six hours after the sun goes down. Other companies, particularly in California, likely will follow suit.

"Big facilities make sense as long as they're integrating storage," Kammen said, adding that a major research push into storage -- focused on everything from batteries to compressed air systems -- could play an important role in helping utility-scale solar expand.

And should the federal government put a price on carbon, utility-scale solar will become ever more competitive, some experts contend. Said Arizona State University's Pasqualetti: "Eventually, it will be so obviously the option, both economically and environmentally, that there will be no question that we should be moving more solidly into a solar future."

This story originally appeared on the Yale Environment 360 website. Sun photo by umbertoleporini via Shutterstock.

Reinventing solar in order to save it