A recent Deutsche Bank report projects global newly installed photovoltaic (PV) capacity will reach 50 GW annually in 2014, a roughly 50 percent increase over anticipated new installed capacity during 2013. Germany has been the longtime undisputed champion of solar deployment, with 35.2 GW of installed capacity as of Nov. 1, although the installation pace lead has shifted in 2013 to Japan. But the U.S. is accelerating -- and is expected to install 4.4 GW of solar this year, about the same absolute amount as the Japanese and more than the Germans.

This growth is impressive, but if the U.S. is to transition to the low-carbon, resilient and sustainable electricity system of the future outlined in Rocky Mountain Institute's Reinventing Fire, we need to install four times more solar capacity annually than we're currently doing, for the next forty-odd years, with most installs coming in the distributed market (residential and commercial rooftops). If we're to do that, we need to make distributed solar cheaper, and do so quickly.

Between 2008 and 2012, the price of sub-10-kilowatt (mainly residential) rooftop systems decreased 37 percent. However, more than 80 percent of that cost decline is attributed to decreasing solar PV module costs. With module and other hardware prices expected to level off in the coming years (and in the near term, actually increase), further market growth will be highly dependent on additional reductions in the remaining "Balance of System" costs, otherwise known as "soft costs." 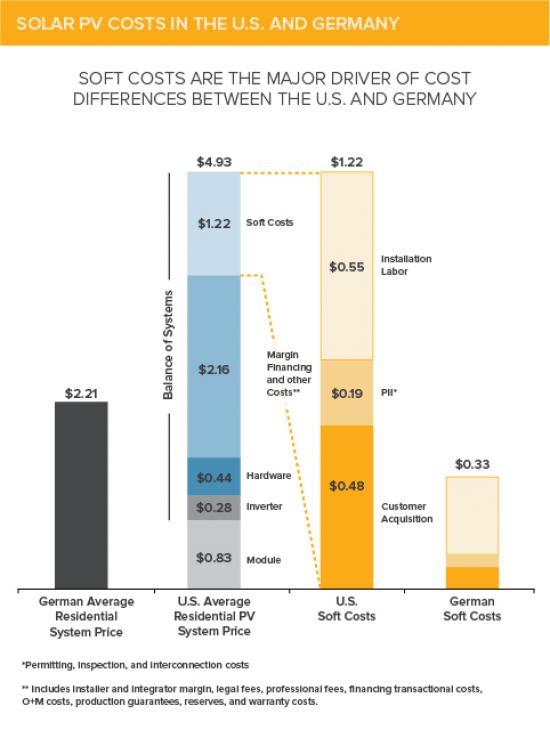 Soft costs account for 50 to 70 percent of the total cost of a rooftop solar system in the U.S. today. These soft costs include installation labor; permitting, inspection and interconnection; customer acquisition; and other costs [PDF] (margin, financing costs and additional fixed administrative and other transactional cost). Setting aside those "other" costs, soft costs for U.S. residential systems are around $1.22 per watt of PV, while German soft costs average $0.33 per watt. That's one heck of a spread. How does Germany do it, and how can U.S. installers approach or even surpass those numbers?

RMI and other groups such as the U.S. Department of Energy, National Renewable Energy Laboratory (NREL), Lawrence Berkeley National Laboratory (LBNL), Clean Power Finance and the Vote Solar Initiative have done great work on this issue over the past several years through benchmarking and other analysis on various soft costs. However, such data remains relatively sparse in comparison to hardware market analysis. The U.S. solar industry has known that German installers are able to install rooftop solar systems at less than half our cost [PDF]. But we haven't been able to discern, at the detailed level of specific worker actions, why. Until now.

RMI, in partnership with Georgia Tech Research Institute (GTRI), launched a PV installation labor data collection and analysis effort under the SIMPLE BoS project, which culminated last week in the release of Reducing Solar PV Soft Costs: A Focus on Installation Labor. Drawing upon first-hand observations, this report is the first publicly available detailed breakdown of the primary drivers of installation labor cost between German and U.S. residential installs.

The SIMPLE BoS team implemented a time-and-motion methodology for evaluating the PV installation process, collecting data on PV installations in both countries.

The results indicated that U.S. installers participating in the SIMPLE BoS project incur median installation costs of $0.49/W, compared to a benchmarked median cost of $0.18/W for participating German installers. The figure below shows the comparative costs of each component of the PV installation process in the U.S. and Germany, respectively, looking at four categories of installation-related costs: racking & mounting, pre-install, electrical and non-production. 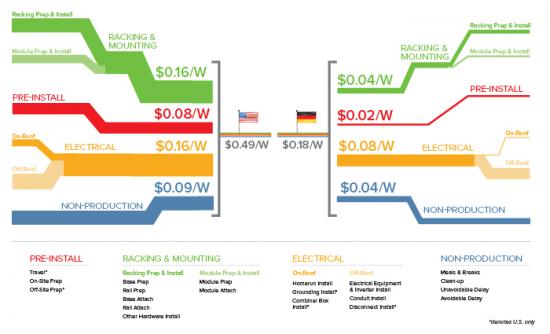 In addition to providing cost details on the PV installation process, the RMI report outlines several enabling factors from German and leading U.S. installers that can be disseminated throughout the U.S. market. These opportunities range widely in complexity and impact, from redesigning the base installation process and preparing rails on the ground to implementing a one-day installation process and PV-ready electrical circuits. The chart below shows the potential impact in $/W of these solutions and how difficult it likely would be to implement them widely in the U.S. 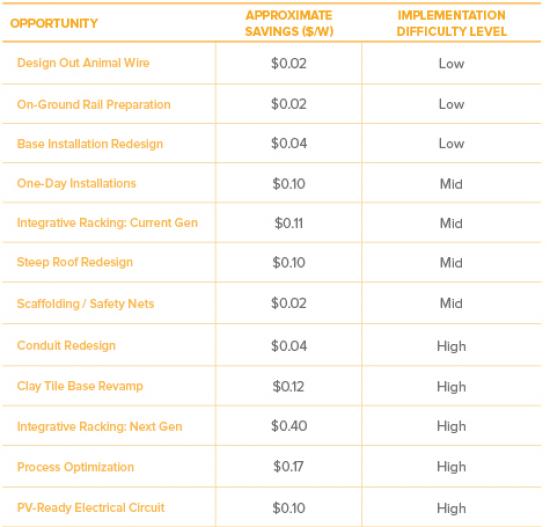 In addition to highlighting specific opportunities for cost reduction in the U.S., the report also draws upon collected data and analysis to outline one potential pathway for U.S. installers to reduce installation labor costs by up to 64% -- potentially undercutting German installation labor costs when relative differences in wages are taken into account. This pathway will not be realized overnight. It requires serious product innovation, uniform adoption of best practices and a move to one-day installations from the average 3-5-day installation process that's common for U.S. installers today.

The hope is that this report and all follow-on work under the SIMPLE BoS project will help the U.S. industry continue to reduce solar PV costs and enable the widespread, cost-effective deployment of residential solar PV systems.