For the past 20 years, international accounting firm KPMG has been tracking the evolution of corporate sustainability reports. Recently, it revealed that a large majority of the world's biggest companies now produce the reports. Of the world's largest 250 companies, 93 percent publish the annual reports -- an impressive figure.

Other good news: In 2008, 74 percent of the largest U.S. companies (by revenue) produced reports; now that figure has reached 86 percent. Worldwide, reporting stands at 71 percent.

The biggest gain is in the Asia Pacific region. While just 49 percent of companies reported in 2011, that's risen to 71 percent in the past two years.

Companies start swimming with the tide

"Companies should no longer ask whether or not they should publish a CR report, even in the absence of regulatory requirements to do so. That debate is over," said John Hickox, who heads Climate Change & Sustainability for KPMG Americas. "Companies that do not publish these reports need to ask themselves whether it benefits them to keep swimming against the tide." 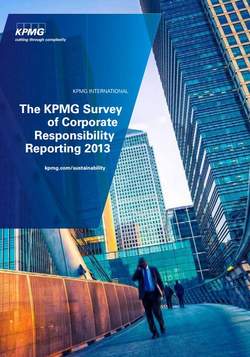 The trend toward using third-party audits of sustainability reports also is growing, with 59 percent of the largest 250 companies doing so.

"We are seeing more companies moving to deeper integration of corporate responsibility (CR) into their business strategy and management processes," said KPMG partner Bruce Piller. "It makes sense that senior management is increasingly looking to third-party assurance as a way to provide external confidence in CR information and demonstrating that the company is as serious about reporting CR data as it is about its financial information."

While in the past, climate change and other environmental issues were cited as "risks" to corporate performance, now they are about equal with "opportunities." According to KPMG, 80 percent report that they have a strategy to manage risks and opportunities.

And they see these risks:

Quality of reporting has a way to go

In terms of the quality of reporting, however, corporations still don't score very high -- KPMG gave the largest 250 corporations an average score of 59 out of a possible 100 points. U.S. companies scored slightly lower, at 54, for "demonstrating a superior understanding of the impact of social and environmental issues on their business, and reporting on their strategy, performance and interaction with stakeholders."

The Electronics/Computers, Mining and Pharmaceuticals sectors produce the highest quality CR reports with average scores of 75, 70 and 70, respectively. The Oil/Gas, Trade/Retail, Metals, Engineering/Manufacturing and Construction/Building Materials sectors scored below the global average, with report quality scores of 55, 55, 48 and 46, respectively.

The highest scores were for reporting on performance targets and sustainability indicators (68) and materiality (66). Companies scored lowest for reporting on the supply chain (46), governance (53) and stakeholder engagement (53). 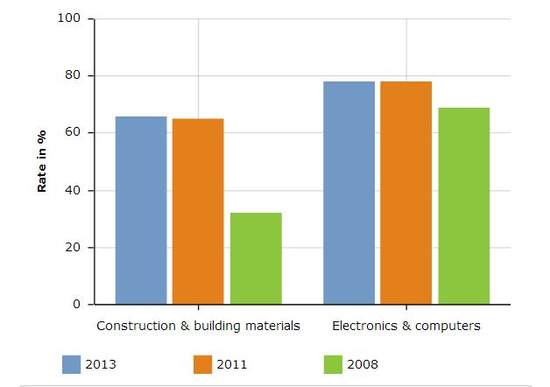 The Global Reporting Initiative (GRI) remains the most widely used voluntary reporting framework, far exceeding the use of national standards and other guidelines. Of the largest 250 companies, 82 percent use GRI.

"What encourages me most about the findings of this year's survey are the signs that many of the world's largest companies are using the process of CR reporting to bring CR and sustainability right to the heart of their business strategy, where it belongs," said Yvo de Boer, KPMG's global chairman for climate and sustainability services.

So far, sustainability reports are a world apart from financial reports. At least 75 percent of U.S. publicly traded companies flaunt the Securities and Exchange Commission (SEC) requirement that they discuss climate change risks associated with their business in annual reports. Only 27 percent even mention climate change.

For more, read the complete KPMG International Survey of Corporate Responsibility Reporting for 2013 .

This story originally appeared at SustainableBusiness.com. Charts photo by tadamichi via Shutterstock.

Survey: More Than Half of Fortune 250 Issuing Standalone Sustainability Reports