SolarCity will use its high-tech commercial skills in solar and energy storage to bring electricity and light to villages in developing countries.

The solar installer on Tuesday announced the creation of a nonprofit called Give Power Foundation to install solar with battery back-up power to communities outside the U.S. For every megawatt of residential solar power SolarCity installs in 2014, it will donate a solar and battery system. In its recent earnings call, SolarCity projected that it will install between 475 and 525 megawatts [PDF] of residential solar next year.

The foundation is partnering with the nonprofit buildOn, which builds schools in developing countries and runs service and education programs in the U.S. Its school-building program focuses on rural communities that don’t have current electricity infrastructure and seeks to involve local people in the planning and construction. SolarCity said the first buildings to receive solar and battery systems will be in Haiti, Malawi, Mali and Nepal.

A shining example in Nicaragua

SolarCity employees already installed a solar photovoltaic system at a buildOn-constructed school in Nicaragua. Like many rural communities in developing countries, the village lacks grid electricity and light, which makes it difficult for both students and their parents to educate themselves, company executives said in a video. The solar panels were installed with the help of local people and provided LED light, powered with a simple back-up battery, to the school at night, which also functions as a community center. 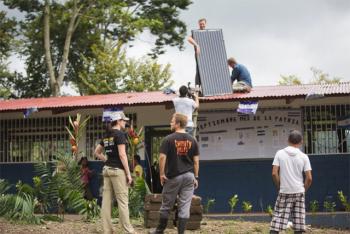 “A school like this will never get electricity unless you have local generation,” said CEO Lyndon Rive in an interview made for the video. “It needs to change. You need to create electricity at the place that it’s needed. You can skip the legacy infrastructure and build out the new infrastructure in a smarter, better way.”

The United Nations Development program estimates that 1.4 billion people worldwide do not have access to electricity at all and 1 billion more have unreliable electricity networks. It’s led to a number of efforts by NGOs as well as social entrepreneurs to develop products for off-grid electricity. For example, there are a number of products to charge LED light bulbs with small solar panels or solar-charged lead acid batteries, which can be used to charge cell phones.

Off-grid solar, using either rooftop or ground-mounted panels, with back-up batteries is a sensible approach for microgrids, as well as on-site power generation in many places around the world where there is no electricity service and building a centralized grid is unlikely. The Solar Electric Light Fund, for example, has used off-grid solar to bring light to 20 schools and power a water aerator at a fish farm in Haiti following the 2010 earthquake. The foundation, funded by energy company NRG, the Clinton Global Initiative and the Clinton Bush Haiti Fund, also has used solar to power the laptops, communications and drip irrigation systems for vegetable gardens.

The SolarCity installations will focus only on providing light with solar, using technology it's developed for the U.S. market. Earlier this month, SolarCity introduced a combined solar-energy storage product built around lithium ion batteries made by electric vehicle maker Tesla Motors. Those batteries are coupled with power electronics and a cloud service that determines when it’s most cost-effective to power a building with a battery. For a community building or school equipped with rooftop solar panels, the back-up battery can be substantially simpler and cheaper. 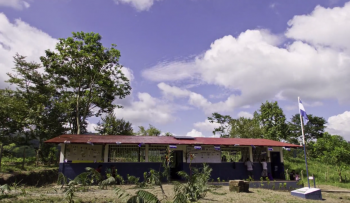 The Give Power Foundation can benefit SolarCity in its efforts to gain new customers in the U.S. and enhance the corporate culture, said Hayes Barnard, SolarCity’s chief revenue officer, in the video. SolarCity’s revenue is growing rapidly by signing on solar customers in the United States, and through this foundation, it can bring the technology to other parts of the world. “I think the dream is to create a culture within a company that is all about growing and giving,” Barnard said. “If you can do that ... I think that’s really powerful.”