The nonprofit group Climate Counts has taken a science-based approach to answering the question “how good is good enough” when it comes to corporate action on climate change. A new study, released today, analyzed the greenhouse gas emissions of 100 companies against science-based targets that seek to limit climate change to 2 degrees Celsius above the levels prevailing in the pre-industrial period. That’s the threshold scientists (and most world leaders) have agreed we must not cross to avoid catastrophic impacts.

Comparing company targets to science is a novel, even radical move. Companies don’t typically cite scientific consensus in justifying the targets they’ve set for reducing greenhouse gas emissions, some of which seem, well, arbitrary. So, this study offers a rare look at how corporate commitments square with what’s needed to address the climate challenge at the scale and scope it demands.

The good news is that 49 of the 100 companies studied rated sustainably in the study, with Autodesk, Unilever and Eli Lilly earning three top spots in the ranking. Of those 49 companies, 25 saw their revenue grow during that same eight-year period, showing that decoupling of growth and emissions is possible. The companies were chosen from among those that submitted data voluntarily through sustainability reports and through organizations such as CDP and the Climate Registry.

That means 51 of the 100 companies failed the test: they are reducing emissions at a rate insufficient to meet the 2-degree hurdle. Companies at the bottom of the list included UPS, Molson Coors and Weyerhaeuser.

The full rankings are at the bottom of the page.

“Our goal with this study is to take what we know about climate science and apply it to what we know about the current state of corporate greenhouse gas emissions as a means of informing a pathway forward,” says Mike Bellamente, Climate Count’s executive director. (I am a board member of Climate Counts, but was not involved in the study.)

The study was conducted by Climate Counts in partnership with the Center for Sustainable Organizations (CSO), an organization that uses context-based sustainability, which it defines as “an approach for measuring, managing and reporting the sustainability performance of organizations that takes contextually relevant social, economic and environmental limits and thresholds explicitly into account.”

The study relies on a metric developed by CSO called the Context-Based Carbon Metric in 2006 in close collaboration with Ben & Jerry's. Embedded in CSO's metric were science-based emissions targets developed by Tellus Institute in Boston. Importantly, the Tellus targets allocate the burden to mitigate emissions “in a justice-based or equity-sensitive way,” the researchers explain. “Emitters in the developed world, that is, are assigned a disproportionately higher share of the burden to reduce global emissions than emitters in the still-developing world receive.”

The development of C-FACT began with the scientific consensus of the Intergovernmental Panel on Climate Change, which calls for industrialized countries to achieve an absolute reduction of 85 percent by 2050 in order to keep the climate from rising more than 2 degrees.

“I have never seen this level of scientific consensus around what needs to be done, so why aren’t we taking our guidance from this?” Emma Stewart, Autodesk’s head of sustainability solutions, explained to me. “One reason is it’s hard to then associate that level of reduction with an individual company and do so fairly. Especially if you’re in a greenhouse gas intensive sector or you’re in a high growth sector, or you have peers of different sizes.”

The resulting tool allows companies to set a target in line with that 85 percent reduction, but do so proportional to their relative contribution to the economy — no more and no less, says Stewart. The methodology operates on three principles: fairness (that a company’s commitment should be proportional to its contribution to the economy), verifiable (that a company uses all publicly available information as well as generally accepted corporate finance techniques) and flexibility (continually updating based on changes in the company).

Autodesk has made the methodology available to any company, and not solely for philanthropic purposes. “Our mission, really, was to kind of disrupt what was considered best practice at the time, and it was self-serving in part because this became a door-opener for us with customers. It lent us legitimacy. Here is a company that not only set a greenhouse gas target, which is now just an expectation of doing business, but they did so in a unique way that is grounded in the science, and then they made the methodology open source and they encouraged other companies to take it on.”

It remains to be seen whether either C-FACT or the CSO methodology used in the Climate Counts study get widespread adoption — and whether the companies that adopt either of these frameworks do well in future rankings. For now, it’s enough if companies recognize the need to let science become part of the process of greenhouse gas goal-setting.

This is no trivial matter. A 2009 study by CDP [PDF] concluded that at the current rate of reduction targets, the world’s 100 largest companies would meet the IPCC’s goals in 2089 — 39 years too late. “The consequences for the climate could be dramatic,” CDP concluded at the time. The new Climate Counts study brings a fresh look at the challenges ahead.

“One thing I’d like to see as a result of this study, and perhaps it’s too idealistic, is for our work on sustainability context to be seen as more than just another rating,” Bellamente told me. “Obviously, any time an organization puts out a list of companies in order of performance, the immediate takeaway will be, ‘So-and-so is doing well, and so-and-so is doing poorly.’ But I’d love for the conversation to get deeper on this one. Mother Nature doesn’t give a crap about ratings. The things we need to do to overcome climate change are a matter of physics, pure and simple.”

Bellamente isn’t sure yet whether this study is a one-off or the first of an annual rating. In any case, he says, there’s a lot more work to do to fine-tune the methodology. “We’ve used the best information that’s available at this moment in time,” he says. “But as we learn more about climate science, as companies become increasingly transparent about their emissions and as greenhouse gas accounting principles become more refined, we’ll see more opportunities to improve on the work we’ve done here.” 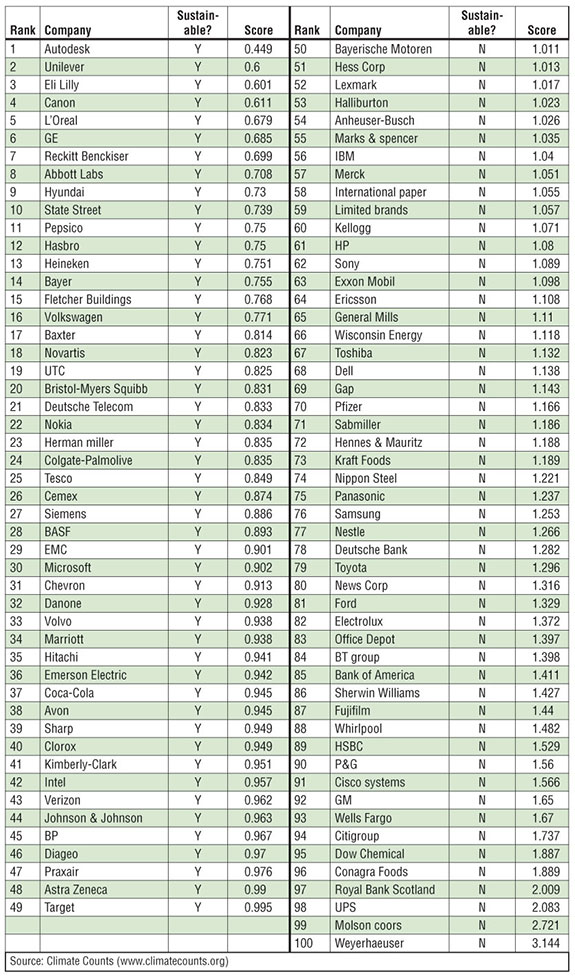 Science lab image from the Everett Collection via Shutterstock