When the Weinreb Group released our latest report, "Pioneers of Sustainability: Lessons from the Trailblazers", the outpouring of feedback regarding the gender imbalance of the Six Pioneers surprised me.

All of them were white men. When James Epstein-Reeves and I first developed the report, we predicted the gender outcome, but not the readers' response to it.

Clearly, something went wrong. In this article, I want to dive deeper into the data to identify how feminists such as us could author a report highlighting the achievements of six men and no women.

We first need to look at the gender balance along the three steps of the process: the nominators, the candidates they nominated and for whom they voted.

Gender balance during the nomination process

Only 31 percent of CSOs surveyed were women: The bias started at the very beginning of the project. To develop our Pioneers list, [PDF] we contacted the 35 chief sustainability officers identified in the Weinreb Group's 2013 "CSO Updated List" [PDF]. Of these 35 CSOs, 11 (31 percent) are women.

We asked the CSOs to nominate the individuals they considered as having the greatest influence on the field of sustainability. We encouraged them to nominate women. We also asked the CSOs to help us determine the definition of a "Pioneer." Two categories of Pioneers emerged, chief executive officers and thought leaders.

Only 12 percent of nominees were women: When we tallied the responses, five women and 37 men were nominated as sustainability pioneers, a ratio nearing 1:7, or 12 percent female. The nominees included Janine Benyus, founder and president of the Biomimicry Institute; Gro Harlem Brundtland, former prime minister of Norway and United Nations Special Envoy on Climate Change; Barbara Krumsiek, chair, president and CEO of Calvert Investments; Indra Nooyi, chairperson and CEO of PepsiCo; and Anita Roddick, founder of The Body Shop.

Let me start by saying that all five of these women are tremendous pioneers. In my opinion, they're on par with the six men in the Pioneers Report. However, relative to the number of men nominated for the Pioneers list, many fewer women received nominations. I believe this is where the root of the problem lies. 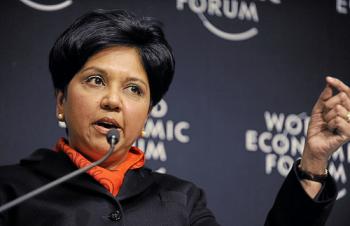 Gender-balanced voters voted for female pioneers only 16 percent of the time: Once we had a list of nominations, we asked several hundred sustainability professionals to vote for one Pioneer in each category: CEO and thought leader. Voters were split nearly equally by gender. In total, 35 women and 38 men voted for the final list of Pioneers. The vast majority of voters did not select female nominees. Just five of 35 women (14 percent) voted for a female pioneer. Only seven of 38 men (18 percent) voted for a woman. If anything, men were slightly more supportive of female pioneers.

Reader feedback on the report

Readers had the opportunity to comment on our report, and they did so in a variety of ways. They could disagree with the choices of Pioneers, or nominate their own favorite sustainability leaders.

At the end of the day, though, most feedback came from female commenters who were disappointed that female pioneers had not been included in the report.

Inspired by our report, Andrea Learned wrote an article, "Where are the Women Leaders in Sustainable Business?" that appeared in the Guardian.

Learned attributes the results of our report to the slow nature of cultural shifts. She writes that women have contributed to corporate social responsibility (CSR) from its early development as a field. But she believes that long-held perceptions in business and media about masculine versus feminine leadership qualities have impeded the recognition of women's contributions. She writes, "We can't see the greater evolution in business culture because we are in the middle of it. But, the footprints of women are already there." She describes three stages of sustainability leadership: Pioneers, Next Shifters and Future Shifters.

Hazel Henderson, founder of Ethical Markets Media and a sustainability leader in her own right, recently expressed similar thoughts about women's current and future roles in sustainability. Her CSRwire blog post about the UN Global Compact's September Leadership Summit refers to a "new wave [of female visionaries], following pioneers of socially responsible business and investing. … Women are now seizing leadership, and the smartest men in the room are willing followers!"

I have some hypotheses about why fewer women than men were nominated for the list: 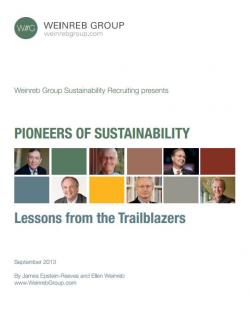 1. The Pioneers in the report had integral and wide-sweeping impacts on business sustainability, often at the field's beginning.

Epstein-Reeves and I believed that many nominated women belonged on the Pioneers list. However, their influence on the overall field of sustainability may have been more limited, or at least perceived as such by our survey respondents.

For example, Benyus has made brilliant contributions to biomimicry, but corporate sustainability comprises a variety of other elements as well. Roddick, sadly, died in 2007 before she could finish implementing her groundbreaking visions for CSR. And although Brundtland has done an enormous amount at the global level, she is a less familiar figure in the United States. Most survey voters were American.

2. The gender gap in corporate leadership indicates we still have far to go.

The gender gap in business, particularly in corporate leadership, is troubling. It is even more evident at the highest levels of corporate leadership. Among this year's Fortune 500 companies, just 22 women were CEOs. The number has risen 65 percent over the last three years, but a long road lies ahead of us in closing the gap.

When identifying CEOs and thought leaders who have made a long-term impact on sustainability, it makes sense to look at what individuals were doing 20 years ago. At that time, there were even fewer female CEOs than today. And thought leaders of that time likely found it difficult to get the same levels of access to corporate sustainability as men did.

3. The Pioneers represent just a few of the many individuals who influenced sustainability and continue to today.

Our report focused on six leading Pioneers. However, a vast field of talented and dedicated individuals have molded the history of sustainability. These professionals form a complex network of people who have influenced and inspired each other. We chose to profile a few notable contributors, with the understanding that our list shows just the cusp of the field.

Editor's note: Follow the GreenBiz column by Maya Albanese, "How She Leads," for regular interviews with leading women in sustainability, most recently with Kate Heiny of Target.

Image of mountain peak by Dchauy via Shutterstock

Why business needs women to lead on the SDGs

Tech is empowering women, and it's great for business