Siemens has been awarded the largest order for onshore wind turbines, for a massive wind farm buildout in Iowa by Warren Buffett's MidAmerican Energy.

Siemens is supplying 448 wind turbines — a solid 1 gigawatt of capacity — to be installed in five new Iowa wind farms. Each turbine produces 2.3 megawatts of energy.

All components are made at Siemens' factories in Kansas and Iowa, including hubs and nacelles, electronics and gearboxes.

At a cost of about $1 billion, "the deal indicates that turbines are becoming profitable without subsidies," noted Tom Kiernan, CEO of the American Wind Energy Association.

The power of wind

The wind turbines, which will be spread across private farmland, will bring private landowners $3.2 million in revenue, pay $360 million in property taxes over 30 years and stabilize electric rates over the long term, said MidAmerican. 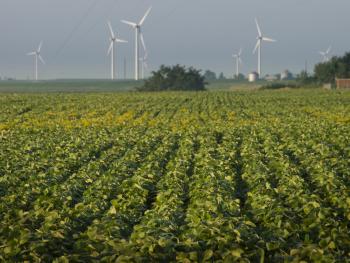 Wind is the least expensive source of power in Iowa. With prices down by 26 percent since 2009, electricity from wind is within 5.5 percent of coal costs, according to Bloomberg.

"If Congress were to remove all the subsidies from every energy source, the wind industry could compete on its own," Kiernan said, referring to the fact that continued fossil fuel subsidies are what's making the playing field unequal.

One wind farm is already online and all five will be producing energy by 2015.

It's "the largest economic development investment in the history of the state," said Iowa Governor Terry Branstad. In addition to creating hundreds of jobs, more companies will locate in Iowa because of the breadth of clean energy there, using Facebook's new data center as an example.

Iowa currently has 5 GW of wind, generating 25 percent of the state's electricity; South Dakota is the only other state where clean energy is such a prominent part of the mix.

Unfortunately, the wind tax credit is set to expire again on Dec. 31 due to a lack of Congressional action.

This story originally appeared at SustainableBusiness.com. Photo of Siemens wind turbine via Siemens.

Why it's time to follow Google, GE and Buffett on clean energy