How ENGIE Insight helps a restaurant chain save water, by the numbers

How ENGIE Insight helps a restaurant chain save water, by the numbers

Did you know one of the biggest consumers of water in diners and quick-serve restaurants are the sanitary perpetual-flow dipper wells required for rinsing food-preparation utensils in a manner that lives up to health codes?

Jodenne Scott, director of financial support services for Shari's Café & Pies -- a 100-location chain in the Pacific Northwest -- suspected this was the case. But it wasn't until she started using facts collected by big-data service provider ENGIE Insight that her company realized just how much was going down the drain.

By switching over to new dipper well technology in about 20 locations, Shari's reduced water usage by an average of 50 percent. Instead of flowing perpetually, the wells add six cups of water each time they are filled and heat it to the required 155 degrees Fahrenheit.

The cost to replace these systems? About $100,000, for five wells in each location. The savings? Close to $135,000 annually, and potentially even more, given that water rates in the Shari's operating region have increased by about 16 percent since 2008, Scott said.

"The return on investment was less than a year," she said. "That is a no-brainer to do this as fast as possible everywhere else."

From billing to insight

Shari's actually has been using ENGIE Insight for close to 15 years, to help manage electricity billing. But five years ago, the restaurant chain began watching all utility expenses, including electricity and water, far more closely using the ENGIE Insight information. Given that each 24-7 facility is designed and configured in pretty much the same way, both in the kitchen and dining room, Scott looks for outliers: locations that perform significantly better or worse than the others.

"We didn’t really know how much water a location should be using until we started looking at this data," she said.

ENGIE Insight provides an easy way to test new systems or approaches: The data it collects exposes the impact of changes or differences pretty much right away. The company is known for its focus on energy management. But given rising interest in water conservation, ENGIE Insight has formalized the services it offers around this area, and in early November, it introduced new Water Outlier Investigation services. 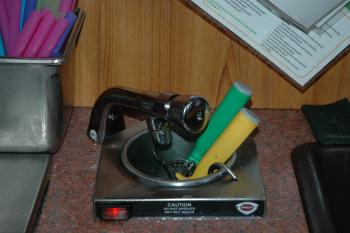 "Water management is not only an immediate opportunity for cost savings, but also a long-term strategy for forward-looking companies as the U.S. faces broad water scarcity and long-standing drought," said Bob Zak, senior vice president of facility solutions for ENGIE Insight.

Shari's worked with ENGIE Insight to test a series of water-related changes at about 20 locations.

Aside from changing the dipper wells, it has installed low-flow pre-rinse sprayers and Energy Star dishwashers that decrease the amount of water used per rack, Scott said. In addition, it has attached sensors to landscaping irrigation systems and is trying out smart meters that use weather data from the National Oceanic and Atmospheric Association (NOAA) to guide whether sprinklers should be used, given the rain forecast.

ENGIE Insight's service offers insights about everything from water to electricity to natural gas, using a database and benchmarks informed by thousands of utilities, business sites and households.

The company doesn't disclose the cost of these services; Zak says it varies depending on the number of locations being monitored, as well as consumption patterns being watched (electricity, water, natural gas and so on). This could range from "dollars per site to hundreds of dollars per site."

"I look at the ENGIE Insight fee as another employee of mine, but just offsite," Scott said.

5 reasons the thirst for water technology will grow in 2014

How to fix the 10 worst wastes of water

How to leverage EMS data for the greatest ROI