In mid-December, we offered a list of 20 mobile applications and Web platforms that sustainable business managers should consider bookmarking, mainly for research purposes and insights that could help guide strategic decision-making.

The common thread tying together those resources — from supply chain management to employee engagement to materials research — is that they were all updated or initially released in 2013.

The intention of this list is slightly different: to highlight certain types of application categories that are likely to become more active during 2014, and which have the potential to emerge as increasingly valuable research and procurement tools.

We've offered some examples for each area, but this list is by no means all-inclusive. Because we can't claim to know about all the stealth projects under way around the world, we encourage you to contact GreenBiz Senior Writer Heather Clancy with the names of resources and apps that we should explore and profile more extensively throughout the next year.

Slowly but surely, businesses are waking up to the world's water crisis, one that will require nearly $1.8 trillion in investment over the next 20 years in order to address shortages and aging infrastructure, according to estimates by the U.N. University Institute for Water, Environment and Health. Predictably, that means more resources to help utilities, businesses and communities research options and approaches. Here are two representative examples:

H2.0 — Under development by consulting organization Water Innovation Project, the H2.0 platform is billed as a "platform for the water utility industry to collaborate and share knowledge around information technology and software solutions." In phase one, the site will share knowledge and results of pilot projects that make use of these technologies. Long term, H2.0 will include a crowdfunding model to help smaller water utilities benefit from these technologies and approaches. 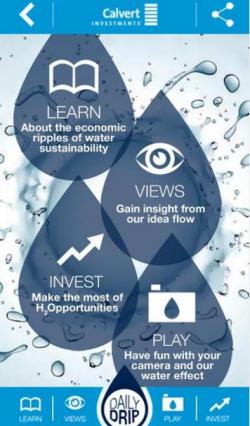 Calvert Water Investing App — Even though it's tied exclusively to the five-year-old Calvert Global Water Fund, this mobile application for both Android and Apple iOS devices delivers weekly news and updates about local, regional and global water issues in an effort to build awareness. The fund includes companies and projects across the entire water infrastructure lifecycle — collection, treatment, delivery and sanitation. It covers desalination, wastewater technologies, reuse and conservation solutions and capital expenditures on pipes and distribution networks.

2. Exchanges that support and promote local and sustainable food sources

Two of the biggest challenges for local farms and organic food producers — finding distribution and securing investors — have very little to do with agriculture. The collaborative economy characterized by well-known sites such as lodging exchange Airbnb and car-sharing service Uber is emerging as a model that could help rewrite the rules. Here are two nascent services:

Farmigo — Originally launched in December 2012, this local food community initiative aims to use the Internet to make it easier for individuals and organizations to buy locally grown or produced vegetables, fish, eggs, cheeses and dairy products. It currently works with 300 farms in 25 states, and is building community collectives in California and New York.

Food Hub — This site brings together regional food producers, professional food buyers and suppliers interested in local, organic and sustainably grown or harvested food. Right now, it serves Oregon, Washington, Alaska, Montana, Idaho and California; but the companies behind the venture intend to expand into New England when viable. Basic access is free.

Annual revenue from organic foods and beverages reached close to $30 billion in 2011. Meanwhile, the use of genetically modified organisms (GMOs) in agriculture and food production has grown dramatically over the past decade: As of 2012, they accounted for nearly 10 percent of the world's arable land, according to data cited by GMO Inside. Genetically engineered seeds are dominant in some sectors; for example, they account for 94 percent of all soy crops. As a result, consumers are scrambling for more information about what they are eating and drinking. Here are two resources to help restaurants and food businesses explain their positions: 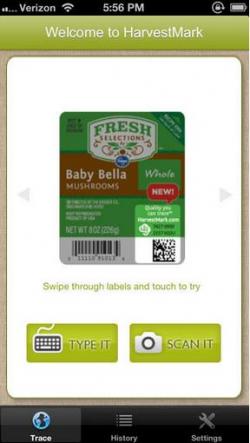 HarvestMark Connect — Adopted by more than 400 leading food brands and retailers including The Kroger Company, Driscoll's Berries and Coleman Natural, HarvestMark offers a way for consumers to trace food origins. It works by letting you enter a code into the Web site or mobile app. There's a fee for food companies to list their information, starting at $500 per year per stock keeping unit (SKU). The model was developed by YottaMark, a privately held company in Redwood City, Calif.

The Non-GMO Project — The NGO behind this Web resource and mobile app for Apple iOS helps food companies list and showcase products that are free of GMOs. A partnership last month with Living Naturally will allow retailers to make more informed procurement decisions and provide GMO information to their shoppers.

Software that helps visualize natural resources and environmental trends within the context of location — described as geospatial applications or geographic information systems — is expected to enjoy a compound annual growth rate of more than 9 percent between 2012 and 2016, according to researcher Tech Navio. One trend that will accelerate in 2014 is the availability of visual resources that help green businesses with decision-making. Here are two examples:

ArcGIS – Created by geomapping giant Environmental Systems Research Institute (Esri), this platform is a "living atlas" of the world with hundreds of maps, ranging from communities to depictions of the earth's biological systems. One example of how the service can be used comes from National Land Realty, which is using the service as the foundation for an application that helps it better understand and assess the land requirements of solar companies.

International Bar Code of Life Project — This database aims to help scientists around the world use DNA barcoding to identify more of the earth's species. There are an estimated 10 million to 100 million around us, but humans have so far catalogued fewer than 2 million of them. Delegates from 25 countries are contributing to this knowledge base, which got its start at the University of Guelph. Beyond the academic value, the database could have commercial applications in food traceability, biomedicine and biomonitoring (for oil and gas fields, as an example).

According to predictions from research firm Massolution, crowdfunding campaigns raised nearly $5.5 billion in financing for social and business projects during 2013, double the $2.7 billion raised in 2012. The JOBS Act, which lets non-credited investors participate more easily, will continue energizing this movement throughout 2014. Many sites already have some sort of environmental or social bent. Here are two that raise that commitment to a higher level:

Greenvolved — This brand-new venture hailing from California isn't technically a crowdfunding site: Rather, its aim is to motivate individuals to vote on projects they'd like to see funded, and then to work with corporate clients to invest in sustainability projects that generated the most interest. Greenvolved says it plans only to work with "companies that have high levels of environmental disclosure and management — in short, we seek out corporations that demonstrate their environmental responsibility through their business activities." Watch a Greenvolved video below:

Solar Mosaic — Described as the first online marketplace to let individuals and institutions invest directly in "high quality" solar projects, the first four projects on Mosaic sold out in less than 24 hours in January 2013 with funders putting up anywhere from $25 to $30,000. In September, the site was used to offer shares in a 12.3 megawatt solar PV installation on 547 homes at a New Jersey military base. The site offers internal rates of return of up to 4-6 percent. (The military project offers a variable rate of LIBOR plus 2.25 percent for the first four years of the seven-year investment period.)

Bookmark this: 10 useful green resources for 2015

No funds for that project? It may be time to ask the crowd

How online maps can speed up solar site selection