I recently took the 10-minute stroll from my home in Brooklyn's Park Slope neighborhood to the new Brooklyn Whole Foods, which opened Dec. 17. The array of fresh produce is amazing, but that's not all that impressed me. The new store turns out to be a model for how New York City businesses can incorporate energy efficiency and on-site clean, renewable energy to lower their carbon footprints.

Like many New Yorkers, my husband, Matthew, and I are somewhat food-obsessed. Although we're not raising chickens in our little backyard, as some Brooklynites do, when we've got some spare time, we like to cook, often using recipes from Yotam Ottolenghi and Sami Tamimi's amazing Jerusalem cookbook. But some ingredients can be hard to come by, even in Brooklyn, with its many excellent food shops and stores; you can't always find chervil or quince at the local supermarket.

That's one reason the opening of the borough's first Whole Foods is good news for us Brooklynites. When you need chervil, or quince or dried bayberries, for that matter, you can probably find them at the new Third & 3rd Whole Foods. As one quipster tweeted recently, the opening "is the biggest thing in Brooklyn since beards."

To achieve this impressive statistic, the store uses an array of efficiency technologies. It installed a combined heat-and-power system that efficiently produces electricity, heating and cooling, capturing heat from the electricity system that otherwise would be wasted to power machines that chill water, and also provide heat and hot water for the store. The system is designed to keep the store functioning in the event of a utility grid failure, an important post-Sandy resiliency feature. The facility additionally uses highly efficient and zero-ozone depleting state-of-the-art refrigeration equipment to keep all that beautiful food cold, and uses high-efficiency lighting and daylighting to illuminate the store.

That emphasis on energy efficiency makes sense. It's always the cheapest, quickest, fastest solution to our nation's energy challenges.

Whole Foods invested as well in some very cool on-site renewable energy features. Among them: 324 kilowatts-worth of solar canopies over the parking lot. That's not a huge photovoltaic system by today's standards — a rooftop system five times larger just went up in the Bronx. But it will still supply about 20 percent of the store's electricity, an impressive figure to be sure. 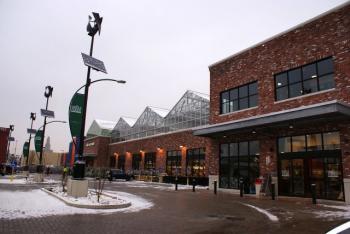 And there's more: The 18 large street lights in the parking lot are powered by cool, free-standing, combined small-scale wind-and-solar power systems, designed by the Manhattan company Urban Green Energy. The off-the-grid streetlights — almost 33 feet tall, they look a bit like airborne egg beaters — use UGE's Hoyi! small-scale vertical-axis wind turbines and small solar panels to generate electricity that's stored in a battery. Their design allows them to work in the event of a power outage, another resiliency feature. And the street lights themselves are super-efficient LEDs. We tend to think of rural areas as the only setting for wind turbines, so it's great to see UGE's innovative smaller-scale wind turbines in use right here in New York City, demonstrating the potential to use wind turbines as an urban renewable energy technology.

The electric vehicle chargers are similarly powered with solar panels and slightly larger UGE vertical-axis turbines. That means Whole Foods customers who charge their EVs while shopping can maximize the potential for EVs to be truly 100 percent renewable and emissions-free, and also supports New York's new "Charge New York" program, which seeks to add hundreds of new EV charging stations in New York, helping both to clean the air that we breathe and save New Yorker's money at the pump.

Oh, and there's bike parking too!

Grants from the New York State Energy Research & Development Authority supported some of the new Whole Foods' renewable energy and energy-efficiency technology features. The solar canopies, for instance, received funding from Gov. Cuomo's NY-Sun Initiative. That program, currently funded through 2015, is finally turning New York State into a solar leader. With one last push from the governor, it can continue through 2023, helping to cut solar prices and enable more businesses, institutions and homeowners to install the clean, renewable solar systems that so many New Yorkers want.

Development of the new Whole Foods, as with many big box stores in New York City, was not without controversy. But there are certainly local benefits, including about 300 new jobs, two-thirds of which will go to Brooklyn residents, according to Whole Foods. You can learn more about the sustainability features of the new Whole Foods through this video clip:

But back to the supermarket. The truth is, I'll probably still do most of my grocery shopping at the Associated market about 50 feet from my house. For convenience, you can't beat it and the food is good, too. But when the Jerusalem cookbook beckons, and there are no quince to be had at my local store, I'll feel good that I have the option of patronizing a supermarket that sets a new standard for energy efficiency and serves as a model for the use of on-site renewable energy as well.