Sharing always has been a virtuous idea, but the post-recession Internet has fostered an unprecedented and burgeoning collaborative economy. Disruptive businesses, such as Airbnb and Uber, help people profit by opening up their homes and cars to strangers. Joining forces with others involves social, economic and environmental sustainability, as people can profit from new relationships while expending less effort and energy than usual.

Crowdfunding is another ballooning space. Through sites such as Kickstarter and Indiegogo, people pool money to help grow innovative ideas, including ones with a sustainable purpose.

Such online platforms make it easy to peruse and support interesting projects. Depending on how much you donate, you can expect to receive anything from a simple "thank you" or a T-shirt, or bigger rewards such as discounted or early access to innovative products. You won’t receive a financial stake in projects at either site. Kickstarter only releases funds to project creators if they reach their funding goals. With Indiegogo, however, project creators can choose to set up their campaigns to receive donations even if they don’t meet their funding goals.)

Here are 15 green crowdfunding campaigns worth funding in 2014, along with a handful of unsuccessfully funded projects that deserve a second chance.

15 projects with a shot at success 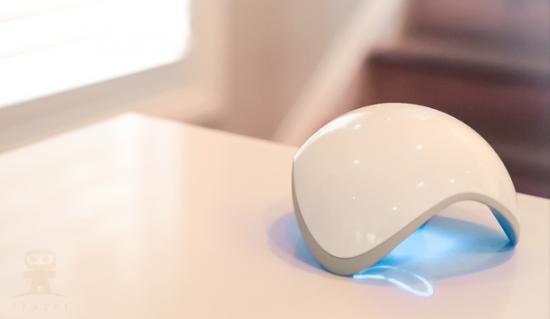 With the "Internet of Things," you can slap a sensor on or in nearly anything and connect it to the Internet, then monitor the object's location, temperature, moisture level and a host of other conditions. This has significant implications for energy savings, safety, security and health.

With radios for ZigBee, Wi-Fi and Bluetooth Low Energy (BLE), this sleek gesture-controlled device monitors signals from sensors and actuators in your home to track temperature, lighting, energy use, the location of people and pets, and anything else you connect to it. If the Ninja Sphere detects something it thinks you should know — for example, if you've left your lights or heat on — it will notify you of that fact using the most appropriate computer or device based on your location. 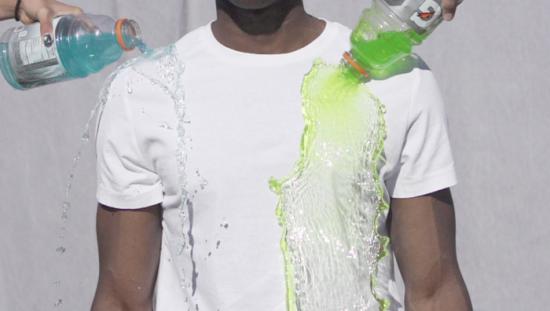 How about doing less laundry? This simple shirt, which comes in black or white, is covered in billions of silica particles to repel all liquids. While Silic is great for sloppy types who tend to spill things such as coffee and ketchup on themselves, it's great for athletes, too, because sweat won't absorb into the fabric. Unlike other hydrophobic materials on the market, Silic won't cause cancer, and the shirt retains its liquid repelling qualities for up to 80 washes.

You've lost power and now the lights don't work. Enter SmartCharge to save the day. Unlike other safety lights that automatically turn on in the event of a power outage — even if you don't want them to — SmartCharge features patent-pending sensor technology that enables it to respond to whatever a light switch tells it to do, even when there's no electricity. Not only does this LED light bulb use far less power than an incandescent bulb, it also has a built-in battery, control technology, intelligence, a CPU, memory and a circuit board. Once the power is back, the battery recharges itself. 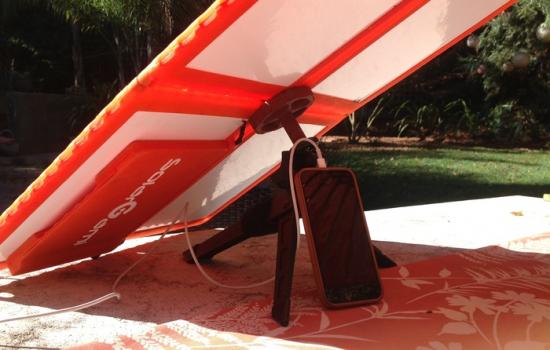 According to SolarGami, the global charging of mobile devices eats up enough energy annually to power 1.5 million U.S. homes for a year. Unlike other mobile solar chargers that are too small and don't generate enough energy or are too bulky to easily tote, SolarGami is large enough to generate up to 25 watts of energy while being light and foldable. It also features a removable battery that takes a couple hours to fully charge and can charge a phone between four and seven times or add 10 hours of life to a tablet. The unfolded panel can be set in the sun on any surface, propped against a wall, attached to a carabiner or mounted on a tripod.

Large files that can't be emailed can present a problem if you're dealing with someone who's not tech-savvy enough to use a cloud storage service such as Dropbox. Your best bet is to share a USB thumb drive, but the cost of doing so can accumulate over time. One alternative is Gigs to Go, a four-pack of USB thumb drives housed in 100-percent recycled paper pulp. The drives come in 2GB, 4GB and 8GB versions, and if you buy a bundle of the latter, Gigs to Go will print them with your business name and even preload your files onto the drives. 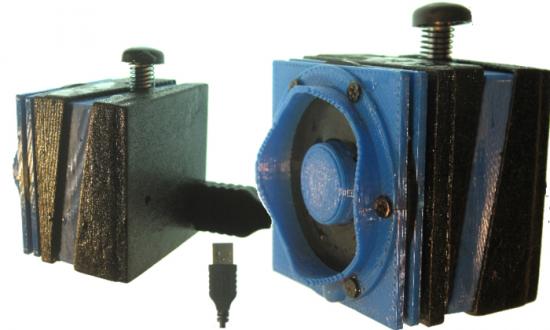 This water analyzer is a hand-held scanning spectrometer you can hold over a disposable or reusable water bottle to scrutinize its liquid contents. Because various elements absorb different amounts of wavelength, SpecShot can identify a material by looking at the quality of light passing through it. Users upload geo-tagged data about SpecShot "drops" (samples) to a crowdsourced database that anyone can access to see water quality around the world.

These stylish glass containers remove air — the enemy of fresh food — when you press down on the lid, without making it difficult to get the lid off later. With no buttons, levers or switches, Evak uses a two-valve system that only activates when the lid is in motion, and seals closed when the lid is not. Not only will your food last longer, the glass is safer than plastic alternatives that may contain BPA and other harmful materials. 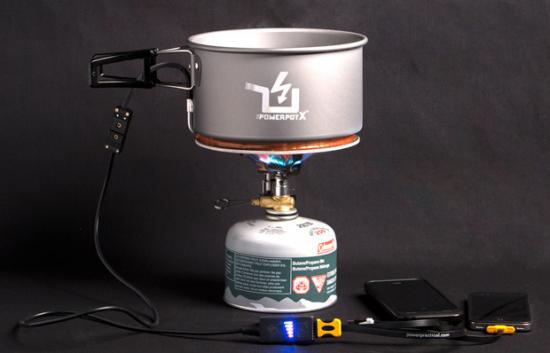 This thermoelectric generator cranks out up to 10 watts of power while you cook with it. The PowerPot X, which works when you fill it with water and place it over a fire, has no moving parts and can charge one tablet and two smartphones, or four GoPro cameras, simultaneously. The generator features two USB ports and a lighted regulator that tells you how much power you're generating, and comes in four-quart and 2.4-quart sizes.

The iGive Trees campaign aims to replant 250 acres of Brazilian rainforest with 170,000 native species trees this planting season. The initiative — spearheaded by a woman who was born in Brazil and shocked to learn that 93 percent of the Brazilian rainforest had disappeared in her lifetime — supports an association of small growers, seed harvesters, a Brazilian NGO and 100 families that will plant and care for the trees. 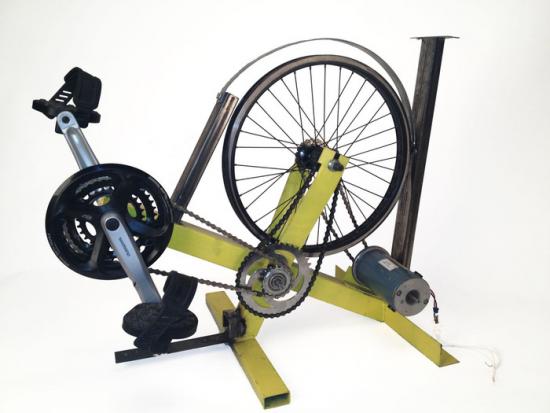 These stationary bikes enable people to use their legs to power objects including electric generators, water pumps, food mills, hydraulic presses, blade sharpeners, strainers, butter churns — basically anything that uses a v-belt pulley or chain and requires less than 1 horsepower. How much energy can humans generate? According to the duo that devised Pedal Power, humans can generate about 1/3 horsepower or 75 watts with peaks of up to 1HP for about two hours — enough to power a laptop for up to six hours or a phone for up to 40 hours.

A global team plans to come together in early 2014 in Goa, India, to build a floating island from recycled and renewable materials, namely trash and bamboo. ASAP island's goal is $8,000, which will be used to buy things such as cement and transportation. The project will be open-sourced, and according to the team planning, it will function as "a floating classroom and stage [and] a 'social sculpture' art project."

This nonprofit is working with the cities of Minneapolis and St. Louis Park, Minn., to create the first sustainable community in the world powered by waste. PLACE is turning a derelict building into a facility that processes organic food waste by using solar, wind, geothermal and anaerobic digestion to efficiently convert it into biogas, which then can be used to generate electricity.

"Currently, organic solid waste in Minneapolis is trucked far outside the city, costing us money and fuel, and releasing greenhouse gases. With this project, Hennepin County will save money, and we'll be putting the waste to work to power homes and businesses in a closed loop: The waste creates energy, which allows community to flourish, which generates more waste, and so on," wrote the campaign poster on Indiegogo. 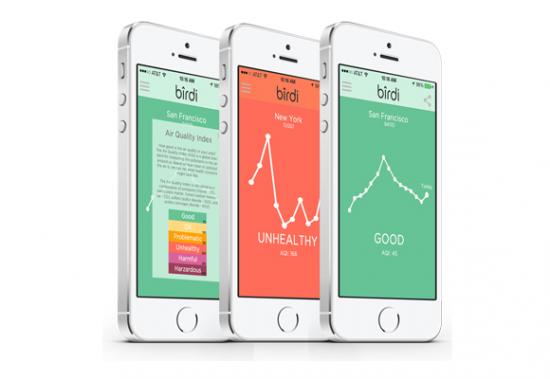 This device is loaded with sensors that monitor emissions, particles, pollen, humidity and temperature. It works in conjunction with an app that gives advice about how you can stay healthy with regard to the air you're breathing. In case of an emergency, such as a fire or too much carbon monoxide, Birdi flashes, sounds an alarm and sends alerts to the phones of the people a user designates.

Water.org estimates that women around the world collectively spend 200 million hours every day carrying water. Current Pumps was co-founded by a Denver engineer who visited Niger, Africa, to help drill water wells and was appalled to see arid, unfarmed land next to the Naimey River. It uses a current of moving water to pump water to farms nearby. 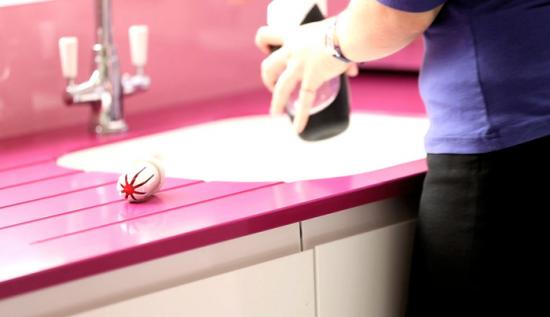 Not only does tap water taste bad, it can have bad stuff in it, as well. NKD Aqua Pod is a water bottle that filters tap water for bacteria and heavy metals while eliminating chlorine taste and odor and not delivering the unpleasant taste other carbon filters can leave behind. It also imparts water with natural minerals and electrolytes to improve taste. The bottle comes in four colors and its filter can be used 300 times before you need to change it.

5 ideas that deserve a second chance

While technically this one successfully raised its funding goal — barely — it's a wonder this beautiful idea didn't get more action on Kickstarter. Called Denimite, it's a lightweight material made from recycled denim scrap and a zero-VOC resin that together can be used to make countertops, panels, furniture and consumer products. Water-impervious with no sealing needed, Denimite can be fabricated and cut with common woodworking tools and is incredibly strong because the denim fibers intertwine randomly.

This Bluetooth Low Energy LED globe can be set anywhere you need lighting and is controlled by a compatible smartphone. It can change color, gradually wake you up with light and flash when you have an incoming call or text message. A six-hour charge on LumiLife's base yields eight hours of light.

Hydrobee is a hydro-powered turbine battery that harvests energy from flowing water, whether from a stream, a garden hose or from being pulled behind a boat. While more than 400 people liked the idea of charging mobile devices in this way, Hydrobee missed its funding goal by more than $25,000.

There's something so hip about shipping container businesses that pop up in big cities, but funding for this one planned for San Francisco was a flop. It was supposed to be an ecological bathhouse powered solely from solar panels. While running off the grid is likely a good idea in most people's minds, some other parts of SOAK's business plan, such as no relaxing music or green tea, could have been a buzzkill.

The founder of this Mountain View, Calif.-based company is on a mission to sustainably produce safe, toxic-free organic fish. While he's not getting much action on Indiegogo, if One Circle Farms somehow manages to raise $250,000, he'll use it to rent a warehouse, purchase commercial aquaponics equipment, get licensed and start growing one or two species of trout, bass, perch, sturgeon or tilapia.

5 innovations that could end plastic waste