It's that time of year again: time for the fifth annual Tommies, my selection of notable bio-inspired developments in 2013.

When I started this ritual in 2009, I had promised an Irish coffee at the Buena Vista Café in San Francisco to any of the inventors who cared to visit. This year, I will have to offer a Kingfisher beer at Khoshy's in Bangalore, India, where I am posted temporarily on a Fulbright-Nehru senior scholarship. As always, I will list the inventions by the organism that inspired the innovation.

1. Dragonfly. Researchers at TU Delft University have designed a prototype ultralight flying robot called the DelFly Explorer. This micro air vehicle (MAV) is the first of its kind to move by flapping wings. It weighs 20 grams and performs takeoff and obstacle avoidance autonomously. It is equipped with two camera eyes that provide binocular vision for judging distances, and can flap its double wings for about nine minutes on a tiny battery.

2. Squid. The squid is a soft-bodied mollusk, except when it comes to its beak, which is razor-sharp and 100 times harder than the surrounding tissue. In fact, it is the hardest non-mineral biologic material known. Researchers at Case Western Reserve University (CWRU) have investigated the structural transition between this soft and hard material with the intention of designing a functionally graded material. The squid uses a natural nanocomposite made of a fibrous chitin network embedded in a biopolymer matrix. The cross-bonding of the chitin determines how flexible or stiff the material is. The CWRU team has substituted cellulose nanocrystals for the chitin, and is able to use water and light to regulate this bonding and the modulus of the material. While still at a proof-of-concept stage, the team sees a potential in medical applications such as insertion needles and prosthetics.

3. Virus. Bacteriophages are viruses that attack bacteria, and a benign one, M13, often is used in synthetic biology research. A team at Lawrence Berkeley Laboratories has increased the polarity of an array of these viruses in order to create a piezoelectrical device strong enough to light up a liquid crystal display. The Bacteriophage Power Generator yields 6 nA of current and 400 mV potential when finger pressure is applied to the modified viruses and electrode array. This technique of modifying the viruses' protein coats for tunable dipolarity has the potential to make mass production of such piezoelectric devices more sustainable and efficient.

4. Diatom. While not mentioned in the designer's statement, certain marine organisms assume shapes that this product mimics to elegant effect. The PURE Tension solar pavilion by Synthesis Design and Architecture of Los Angeles was commissioned by Volvo Car Italia and is self-supporting with a modified minimal-surface shape. (On a minimal surface, the curvature along the principal curvature planes are equal and opposite at every point, making the mean curvature zero. While the shape does not appear to fit this definition exactly, it has aspects of this kind of geometry.) The solar pavilion is made of tensioned high density polyethylene (HDPE) Mesh skin with embedded flexible photovoltaic (PV) panels and a perimeter ring made of carbon fiber rods. 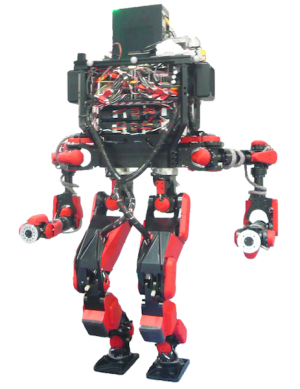 5. Human. Team Schaft, an engineering design shop recently acquired by Google, won the first round of the DARPA Robotics Challenge in December, scoring well ahead of all competitors. The S-One robot had to autonomously drive a vehicle, climb a ladder, move across rough ground and hook up a hose, among other actions.

6. Fly. The structure of a fly's ear was used as a model for this hearing aid, designed by scientists at Binghamton University. Ormia ochracea has eardrums that sense sound pressure, and female flies use their directional hearing to locate singing male crickets, on which they deposit their larvae. The new design uses a microelectromechanical microphone with a 1 millimeter by 3 millimeter diaphragm that is designed to rotate about a central pivot in response to sound pressure gradients. The diaphragm's motion is detected using optical sensors and dampened by a pioneering electronic damping system.

7. Vascular plant. The xylem support structure in vascular plants has a helical structure that has been put to use in the design of magnetic microswimmers by a University of California San Diego (UCSD) laboratory. These biomedical devices have promising potential for drug delivery, nanofabrication and cell manipulation. The xylem support structures are made of chiral crystalline cellulose, which researchers have used as a scaffold for a magnetic coating. These tiny corkscrews will be guided through the body using a magnet outside the body. The spiral shape allows for speedy travel, and manipulation by the magnetic field obviates the need for an internal fuel and motor. The abundance of these structures in a typical plant stem ensures a ready supply and cheap manufacture. The organic nature of the core template suggests biocompatibility opportunities.

8. Blood cell. Engineers at UCSD investigated the use of blood cell models for removing toxins from the blood. They wrapped a biocompatible core in a natural red blood cell membrane to produce a "nanosponge" capable of safely removing a broad class of dangerous toxins, including those produced by MRSA, E. Coli, poisonous snakes and bees.

This represents a new way of treating so-called pore-forming toxins that eat holes in cells, rather than custom-designing specific treatments for each toxin. The toxins are attracted to the red blood cell "decoy" and absorbed before they can attack true red blood cells. In a study against alpha-haemolysin toxin from MRSA, pre-innoculation with nanosponges enabled 89 percent of mice to survive lethal doses. 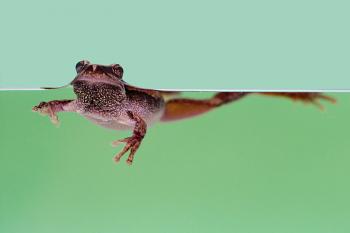 9. Frog. Frogs and beetles that go underwater to hunt for prey stay attached to surfaces by the unintentional trapping of air bubbles at their feet. These bubbles of air provide a structure for capillary action that holds the animals in place. Researchers at the National University of Singapore have employed this "capillary bridge" process in an experiment to improve the large-scale production of graphene. By inducing bubbles at the surface between a copper foil and a silicon wafer substrate, the researchers were able to induce a coating of graphene unto the silicon without the typical delamination. The potential for this improved manufacturing process is significant. Graphene has a wide range of applications in photonics or electronics, including devices such as optoelectronic modulators, transistors, on-chip biosensors and tunnelling barriers.

10. Arthropod. The compound eye of insects continues to be investigated for photonic applications. A digital camera that functions like this type of eye has been developed by a development team from the University of Illinois at Urbana-Champaign. It took elastomeric compound optical elements with deformable arrays of 180 thin silicon photodetectors (acting as artificial ommatidia) and molded them over hemispherical shapes to integrate into the camera. This advancement in camera technology would be significant, as typical arthropod compound eyes have a wide-angle field of view, infinite depth of field and acute sensitivity to movement.

That's my list for 2013. It is constrained by the limits of my awareness and space for coverage, rather than the amount of work being done. Dozens of deserving projects have not made it to this blog, and that is very good news indeed.