Now that the holidays are over and so many gadgets have been replaced with the newest versions of TVs, cell phones and tablets, a story on e-waste in the U.S. was inevitable.

This year is different, however, because for the first time, emerging countries are throwing out even more electronics than we are in the U.S. Actually, the trend started in 2012.

When it comes to e-waste, countries such as China, India, Brazil and South Africa are making up for lost time. E-waste is expected to surge 33 percent between 2012 and 2017, led by the developing world.

In just three years, the annual volume of e-waste will rise to 36.7 million tons in developing nations compared to "just" 28.6 million tons in the U.S., Europe, Japan and Australia combined. Stack it up and you'd reach the heights of nearly 200 Empire State Buildings.

Last year, an average of 15 pounds of electronics was produced for each of the world's 7 billion people. That's according to a report released by the United Nation's StEp Initiative, formed to tackle the enormous problem.

E-waste — the world's fastest growing waste stream — includes anything with a plug, even old refrigerators and motorized toothbrushes. 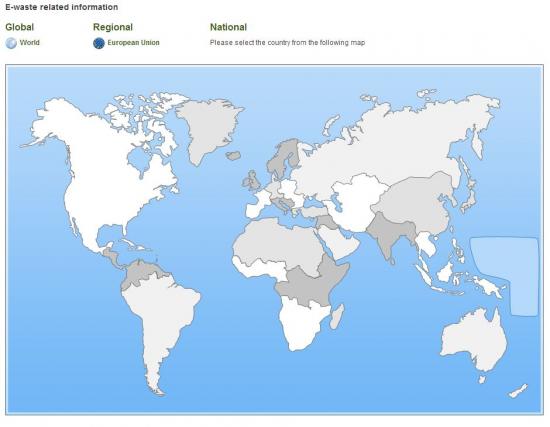 Mapping the magnitude of the problem

"Although there is ample information about the negative environmental and health impacts of primitive e-waste recycling methods, the lack of comprehensive data has made it hard to grasp the full magnitude of the problem," said Ruediger Kuehr, executive secretary of StEP.

China and the U.S. lead the world on e-waste. Based on volume, China leads with 11.1 million tons, followed by the U.S. at 10 million tons. But per capita, the U.S. still leads the pack. There are 29.8 kilograms of waste generated for every American, six times higher than per Chinese citizen.

But because used electronics can be called "mixed metals" on import documents, they can be hard to track, so there's probably much more exported. Clearly, better tracking is needed, including codes specifically for used electronics, says StEP.

Exports are a problem because they too often end up in toxic dumps, sifted through for valuable components by the world's poor. A million cellphones yield about 53 pounds of gold, 250 kilograms of silver, 9 kilograms of palladium and 9 tons of copper, all valuable materials, reports Reuters.

Dell recently launched a large-scale e-waste recycling facility in east Africa, which many see as a model for waste collection and recycling in developing countries.

Jointly developed by Kenya's government, NGOs, IT companies and e-waste recyclers, it creates a business model that ensures responsible recycling of e-waste while creating thousands of jobs.

Shipping containers will be set up at more than 40 collection points in Kenya, each functioning as an independent small business that purchases e-waste from newly trained individual collectors (generally from east Africa).

When a shipping container is full, business owners sell the contents to a central hub where the e-waste is processed into its components. Then they are sold once again, this time back to the technology industry for reuse. Each stage is designed to be profitable for participants, from individual collector to collection point to hub.

No more will an army of informal "pickers" be exposed to hazardous, toxic waste as they pick through the debris. Rather, they will be trained — by Dell and others — to safely collect and recycle the waste, and will be compensated for their work.

Apple is also enticing customers to recycle their iPhones by offering a rebate of $345 when they turn in their "old" phone.

This story first appeared at SustainableBusiness.com. E-waste photo by Bakalusha via Shutterstock.

Seeking An International Solution to Mountains of E-Waste