One of Ocean's Sprays most significant logistics expenses — and a major contributor to its carbon footprint — was the need to ship product more than 1,000 miles from its Bordentown, N.J. distribution center to another distribution center in Lakeland, Fla. By coincidence, both distribution centers are a short distance (60-65 miles) from rail yards used by a competitor, Tropicana, which shipped orange juice north from Florida in special refrigerated boxcars.

Tropicana itself had a key difficulty when it came to logistics. Although it could send product direct from Florida up to the CSX rail terminal in New Jersey, that's where the efficiencies ended. Once offloaded, the refrigerated rail boxcars often would travel empty back to Florida — an obviously inefficient use of fuel that cost Tropicana both money and additional emissions.

Tropicana's third-party logistics provider, Wheels Clipper, saw an opportunity to help its client while earning the trust of a new customer. The company approached Ocean Spray and proposed that they operate an intermodal lane from New Jersey to Florida that would put Tropicana's empty orange juice boxcars to use on Ocean Spray's behalf. The goal was to save Ocean Spray money (and reduce emissions) by allowing them to switch from trucking their cranberry juice to sending it more efficiently by rail, while also saving Tropicana the cost and emissions associated with empty cars returning south.

The plan provided environmental benefits and lowered costs for both companies.

The environmental gains were not easy to compute, however. The idea required Ocean Spray to compare the emissions generated by both intermodal and truck movements. Arriving at the latter value was difficult because Ocean Spray contracts with outside carriers to transport its products, and in many cases does not have the required fuel consumption data for the trucks used by these external carriers. MIT CTL helped the company to solve the problem by using an emissions factor to complete the calculation. 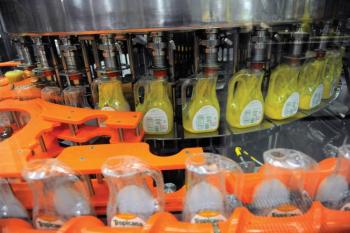 But there were potential downsides. To make the idea work, Ocean Spray would have to change its relationships with existing logistics providers and work with a new third-party logistics provider, using a mode the company was unfamiliar with. Even more challenging, the arrangement required Ocean Spray to collaborate with one of the company's strongest competitors in the beverage business, Tropicana. Yes, Ocean Spray would reap key benefits — but so would its competition. Did this really make business sense?

The potential ROI if the project succeeded made it clear that it did. Using the intermodal solution would save Ocean Spray more than 40 percent in transportation costs compared to the previous trucking method, and reduced its GHG emissions by a whopping 65 percent. Meanwhile, Tropicana would eliminate most costs and GHG emissions of the boxcars' return trip from its ledger  — a significant reduction in each metric, at the price of some (admittedly complex) process changes.

In the end, the fact that there was a clear ROI for both shippers gave incentives to the participants that helped them to move the project forward and make it successful.

This article is adapted from "Delivering on the Promise of Green Logistics" by Edgar Blanco and Ken Cottrill, published Dec. 16, 2013 by MIT Sloan Management Review. The complete article is available here. Freight train photo by Oleksiy Mark via Shutterstock.