How much "value" is your city missing by postponing its strategy for the Internet of Everything (IoE)?

If you consider the entire public sector, including defense and military applications, the number doubles. Cisco believes the value provided by IoE solutions in terms of costs cuts or new revenue streams created could eclipse $4.6 trillion. What's more, the potential to realize this value quickly — in a matter of weeks or months, not years — is accelerating, according both to Cisco and to several of its IoE customers and partners.

"2014 is going to be an inflection point," said Wim Elfrink, executive vice president of industry solutions and chief globalization officer at Cisco, during a briefing originating from the International CES show in Las Vegas. "You're in it, or you're out."

Civic leaders have a unique opportunity to set their own agendas, said Manel Sanroma, CIO of Barcelona City Council, which has collaborated closely with Cisco for years on its smart city agenda. Indeed, urban communities can ill afford to wait around for their regional or national leaders to make this a priority, he said: "When cities take the lead, everything changes." 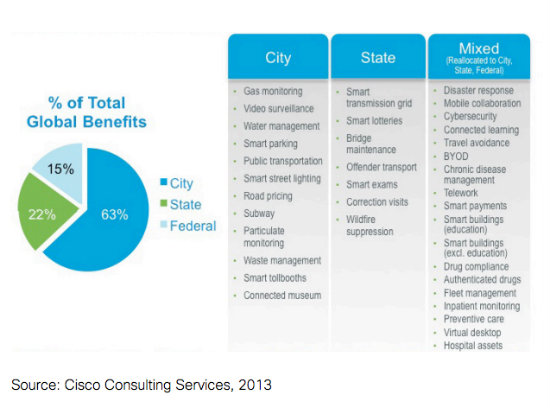 But this will take hard work focused on bridging the priorities of different city departments and agencies. "This takes leadership," Sanroma added. "It's not easy at all. One of the main problems in Barcelona is that the city has been doing pretty well for several decades. Trying to convince servants, who in many cases have been doing well, is pretty hard."

The results released by this Spanish city of 4.5 million people are compelling. Over the past several years, Barcelona has deployed converged Wi-Fi technology across its historic neighborhoods to support advanced parking, waste management, lighting and transportation applications. About 44,000 new jobs and 1,500 startup companies have been created in the process, and here's the value all this is generating:

In order to help other cities benefit from its experiences, Barcelona has developed reference designs for the following applications:

What are the killer apps?

Cisco defines IoE to include three types of connections: machine to machine, person to machine and person to person.

The company figures there are 40 critical use cases that cities will find particularly relevant when defining IoE strategies, said Joseph Bradley, managing director, Cisco Consulting Services, Internet of Everything practice. In order to make those plans actionable, the solutions must be relevant, pragmatic (meaning they can be deployed quickly) and material to a city's operating budget, he said.

Cisco estimates the value it believes IoE solutions could create — about 70 percent ($3.2 trillion) of which will be agency-specific. Here are some of the "killer apps":

No more paralysis of analysis

The time for projects that take multiple years to have an impact is past, said Zia Yusuf, president and CEO of Streetline Networks, which focuses on smart parking solutions. "We should think in terms of months and weeks," he said during Cisco's IoE briefing this week.

As an example, he cites a smart parking deployment in San Carlos, Calif., where it took one day to install about 500 sensors and three to four more days to get the application up and running. Since that time, the amount of time it takes to find a parking spot has been reduced by 60 percent to 70 percent, while meter compliance has improved by at least the same amount, Yusuf said.

"People who are willing to break down siloes can do this," he said.

Cisco began trumpeting its uber IoE strategy last year (you won't hear its managers use the phrase "smart city" all that much). That's after it pushed reset on its earlier attempts to develop divisions focused on energy-efficiency management solutions for both commercial and residential buildings. Whatever you choose to call it, Cisco's CES publicity blitz signals an intention to ensure that its networking, wireless and video communications technologies are the foundation for all manner of Internet of Things solutions. Its push appeals both to those minding city coffers, and to the need for urban centers to improve how they deliver services to their citizens.

“This is not about technology at all,” said Cisco CEO John Chambers during his CES keynote address. “It’s about how it changes peoples’ lives forever.”

Top image of office building by YanLev via Shutterstock

Joseph Bradley, Cisco: Imagine your Internet of Everything

Will that M2M solution work? AT&T is hacking the answer