Why an evidence-based approach is the key to meaningful CSR

Why an evidence-based approach is the key to meaningful CSR

They filled the Capital Hilton ballroom in Washington, D.C. — leaders of large and small charities throughout the country trying to build higher-performing organizations "managing to outcomes."

The After the Leap Conference was the brainchild of Mario Morino, founding chairman of Venture Philanthropy Partners and chairman of the Morino Institute. Morino, who made his fortune in the early days of the tech boom, has for the past two decades turned his innovative mind and business acumen toward helping the philanthropic sector embrace meaningful outcomes.

His groundbreaking book, "Leap of Reason: Managing to Outcomes in an Era of Scarcity," urges leaders in government, business and the philanthropic sectors to take "bold action" in order to focus increasingly limited resources where they do the most good in addressing pressing social needs.

I've been following Morino's work for more than 15 years and have watched his influence begin to move the discussion from "why" should we do this to "how." Just as important, I've watched the symposia and conferences discussing outcomes- and evidence-based philanthropy grow from gatherings of a couple dozen thought leaders to what is now truly becoming a movement of change and impact.

This is important for several reasons and should be of serious interest to several key leaders and influencers in philanthropy. First, the reasons: Morino was the closing speaker at the After the Leap Conference. In my opinion he could have been the first because his message framed the reason why outcomes and results are so vital. Here are the reasons why:

• Economics and demographics. Shrinking disposable income, an aging population and increased demands for basic human-care services as a result of stagnant and declining wages — as well as the inevitable drop in federal and state funding for human-care services — will require that we make hard choices.

Where in the past government and human care and social interest institutions could survive and even thrive based on brand awareness and emotional appeal, there will now be pressure to only fund institutions and organizations that can demonstrate through data and analytics that their programs work, are scalable to solve big problems and are sustainable.

• Outcomes actually matter. There's a big difference between outputs and outcomes. Outputs, while important, measure how much of something occurs and by when. Outcomes, on the other hand, measure behavior or systemic change. A clear graphic showing this distinction can be seen below. 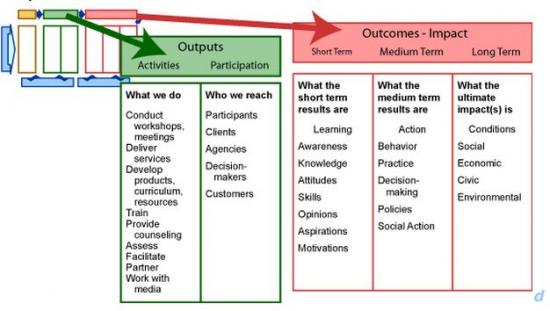 • Performance actually matters. As multiple speakers at After the Leap emphasized, you can't have competent, problem-solving, innovative, outcomes-driven organizations without the capacity and infrastructure to effectively and consistently execute.

As with any big idea, it's the "how" that gets complex. The concepts of "performance management" and "evidence-based outcomes" have been bouncing around philanthropy and the civil sector for quite some time. In regard to the philanthropy side of the equation, some fear that embracing "business practices" will result in a loss of mission and soul by charitable organizations. If you want to see the debate, just go online and search "evidence based philanthropy." Five years ago the search would have surfaced mostly stories and discussions that were negative. But now the body of evidence and knowledge has increased, demonstrating that for a growing number of high-performing charities, performance management and an evidence-based approach is working.

In listening to the speakers, panel discussions, Q&As and hallway conversations, I came to the conclusion that given what Morino calls the coming "era of scarcity," the performance management and evidence-based advocates are on the right path — and I've become one of them.

As a former philanthropy officer for a major multinational company and current leader of America's Charities — an organization that works with employers to better connect their workplace giving, philanthropy and employee engagement efforts with broader CSR strategy — I see evidence that corporate funders and gatekeepers are beginning to get wind of this emerging movement and fast-approaching need. But I also sense many of them are somewhat clueless, simply following a path of "doing well by doing good" and not seriously considering the effectiveness, sustainability or scalability of the causes and issues they fund.

Measurements such as the numbers of grants given, numbers of employee volunteer hours or numbers of toys or clothing collected and distributed, are outputs. They are good things, yes. But they are not outcomes. 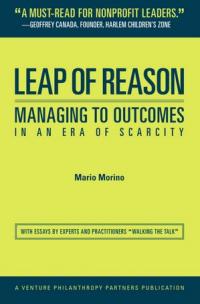 One last point on outcomes: A number of charity watchdog and rating service groups have emerged over the years. Some have evolved into meaningful and substantive organizations that are working hard to embrace and incorporate more sophisticated analysis into their charity rating systems. Others continue to "rate" charity effectiveness on single factors, including administrative overhead or salaries paid to executives — outputs instead of outcomes.

This is complex and nuanced material that cannot be "dumbed down," although some media outlets continue to try to do so with their annual "Top 10 best and worst charities" stories. In fact, one of Morino's big ideas (which I love) is to take the After the Leap message on the road in the equivalent of an IPO roadshow for meetings with editorial boards, key community and business leaders, and other important stakeholders (how about donors?) to begin influencing their thinking.

It will take a tri-sector commitment and collaborative effort to meet the most vital human care and social responsibility needs as public-sector resources become more scarce. As Morino says in "Leap of Reason: Managing to Outcomes in an Era of Scarcity," if we don't manage to outcomes, we greatly diminish our collective impact.

Chart photo by goldyg via Shutterstock

Confessions of a Green Skeptic

Why foundations are spending more to address climate change