When SolarCity and Tesla announced last month that they are teaming up to offer battery backup for residential solar PV systems, they generated much excitement and a disproportionate amount of press. From Greentech Media to the New York Times, stories abound about how the union of these two companies heralds the next stage in the evolution of distributed energy resources.

Yet solar-plus-storage actually has been around for decades. In fact, it kickstarted the solar industry in the early 1980s. A bunch of marijuana "farmers" in Northern California who weren't connected to the grid needed a way to get electric lights for their grow operations. A young hippie stumbled upon an ARCO solar panel at a consumer electronics show, founded AEE Solar soon after, and started powering off-grid homes with solar panels and car batteries. His customers always paid with cash.

With the 1990s' deregulation and incentives for solar PV, grid-connected systems became popular. The only people still worried about storage were those trying to electrify remote homes in less developed countries. But solar and storage systems became a hot topic once again in 1999, when people worried about Y2K and the potential end of society as we know it. "We were glad when homeowners wanted to learn about grid-tied PV systems with battery storage," Johnny Weiss, founder of Solar Energy International, told RMI. "After Jan. 1, 2000 came and went without disaster, interest in batteries clearly seemed to become less important."

That interest is back. Whether due to disasters such as Superstorm Sandy, when millions of homes lost power, or to the ability of commercial customers to reduce hefty demand charges through peak shaving, the idea of putting solar and batteries together is gaining a lot of renewed attention.

The new SolarCity and Tesla partnership uses Tesla's battery technology to offer backup power for SolarCity's residential solar customers. However, the actual product offering is not that new; others have offered similar products for years.

Green Charge Networks' GreenStations and Stem's battery systems, for example, decrease electrical costs for commercial and industrial customers by storing power during non-peak hours for use during peak periods. GreenStations already have been installed in multiple locations throughout New York City. Stem claims utility bills for companies using its storage system will be cut by 10 to 40 percent. Then there's Solar Grid Storage. Maryland's first microgrid, installed in October at Konterra headquarters, uses a 402 kW array with a Solar Grid Storage system that will keep 50 kW online for more than four hours if the grid goes down. On the residential side, NRG offers solar canopies — shade structures constructed of photovoltaic panels with a battery to store the electricity for use at night or during a blackout. Utility companies are also getting into the game, with San Diego Borrego Springs and the Sacramento Municipal Utility District both currently testing storage for homes.

What is exciting is all the attention that storage is now attracting, thanks to the big names of Tesla and Solar City and the man who links them: Elon Musk. Musk seems to bring high visibility to anything he does, and the solar-plus-battery offering is no exception.

"Both Solar City and Tesla are known to be insurgents and disruptors, and that's why there's so much attention on this particular offering," says RMI senior associate Leia Guccione. While before not many people paid attention to solar-plus-battery systems, "Tesla adds that sexy element, where people are definitely paying attention now." 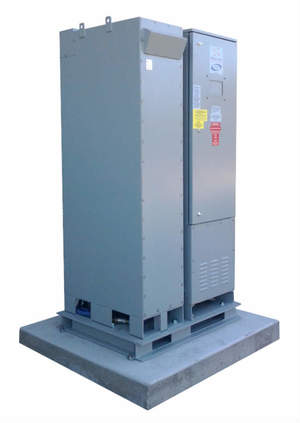 Yet the significance is not that Tesla and Solar City are bringing us into a new paradigm, but that the solar-plus-storage idea is gaining a whole lot of traction.

"For a long time, battery energy storage was referred to as the holy grail of energy; people said it will become viable when we figure out cold fusion," according to Guccione. "Now people know this is a technology that's coming out of infancy, and more companies are coming out with commercial offerings. This is further evidence that battery energy storage is here and is here to stay."

RMI associate Bodhi Rader adds: "More people are entering the space. We could call this a game-changing moment."

What's really exciting in the solar-plus-battery arena is what batteries offer beyond backup — to both solar PV and the grid and utilities. Voltage and frequency regulation. Black-start capability after macro- or microgrid outages. Using batteries as a less expensive alternative to peaking plants during high demand periods. Demand charge reductions via peak shaving. Shifting load profiles with batteries to take better advantage of time-of-use electricity pricing. The list goes on.

If current trends are any indication, soon batteries may become a common part of solar PV systems, including residential. "This will be a whole-home energy solution," according to Guccione. "That's where the next frontier is, and we hope to see SolarCity and Tesla go there."

And pretty soon it won't just be for those in the higher-income bracket. Bloomberg New Energy Finance predicts [PDF] that battery storage costs will fall 57 percent by 2020. Lux Research sees the global market for PV systems combined with battery storage growing from the current $200 million a year to $2.8 billion in 2018.

"We look at economics as the thing that will bring the critical mass to the tipping point," says Guccione. "There has to be a whole wave of first movers, but the increasingly favorable economics will evolve solar-plus-battery systems from early adopters to a mainstream solution."

New business models will make it easy for customers to add storage to existing systems or build storage into new systems, through leasing and third-party financing models similar to what has made rooftop PV so accessible. And solar-plus-battery systems will be available to the masses, not just to off-grid pot farmers who can pay in cash. This is all good news for people wanting clean, reliable electricity.