That demise continues to stir debate among those who believe the mandate takes away consumer choice for old-school bulbs, which make up about half of the residential lighting market. The $1.1 trillion spending bill passed by Congress in mid-January even includes a provision to ban the enforcements of the "onerous" standard.

Political posturing aside, the momentum behind industrial and commercial building retrofits continues to build — and that's simply because they make sense. Depending on the data you cite, many LED projects yield a return on investment within two to three years; incentives and rebates can accelerate the payback by six months. As a result, revenue for this sector is expected to grow to more than $25 billion in 2021, from just $2.7 billion in 2013, predicts Navigant Research.

"The rise of LED technology will transform every part of the commercial lighting industry," said Jesse Foote, an analyst at Navigant. "While other lighting technologies have limited potential for future improvements, new designs for LEDs that push quality and efficacy to new levels continue to emerge from lighting labs around the world."

LEDs aren't the only story in lighting, of course, but they are laying the groundwork for innovations that could have a direct impact on your sustainable business agenda. Here are five related trends we're watching.

1. More lights get smarter, laying the foundation for more Internet of Things applications

The LED migration is, in turn, stimulating a huge increase in the installation of intelligent lighting controls such as occupancy sensors, photosensors and wireless networks that link them.

Sales of these technologies will more than double between 2013 and 2020, reaching $2.7 billion annually by the end of the forecast period, predicts Navigant Research. "The market for lighting controls in commercial buildings has expanded and transformed dramatically in recent years, as creative ways to visualize lighting usage and new strategies to manage lighting energy consumption proliferate," Foote said.

Just one player in this market, Digital Lumens, has more than 100 million square feet of smart lights installed.

Just as important, these networks are creating a communications network for other efficiency applications. One example involves climate change: Occupancy sensors can be coordinated for heating and cooling profiles. They also could be a valuable complement to security systems and policies.

One lighting format notably slow to migrate to LED technology has been fluorescent tube lighting, mainly due to cost factors. But the replacement market across stores, offices, warehouses and so on will get more attention this year, thanks to new technologies from the likes of Philips. 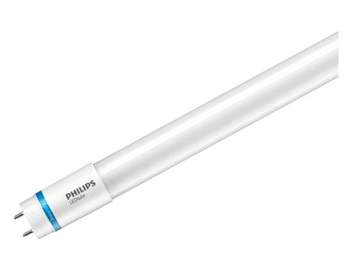 This quarter, Philips will ship InstantFit LED T8, its LED tube lamp offering. The company's pitch is that these lamps provide a "click to fit" retrofit option for linear fluorescent bulbs. (Many previous offerings have required a rewiring of the ballast.) It estimates a savings of more than 40 percent in energy consumption, with a payback in less than three years.

"Using the new LED tube does not need any special operation," said Mariano Herranz, maintenance technician at Gas Natural Fenosa, a utility that has been using the bulbs. "You just substitute the old tube for a new LED one."

According to Philips, the installed base for linear fluorescents is about 12 billion lamp sockets. Put another way, it figures that more than $50 billion in electricity could be saved through LED replacements, which equates to the amount of energy generated by 210 midsize power planets.

While it's probably difficult to justify taking existing streetlights off the grid by using solar power or other renewable sources, it makes all sorts of sense to consider this option for new apartment buildings, roadways and buildings. Manufacturers including Clear Blue and Sol Lighting are stepping up to oblige.

So far, Sol Lighting has deployed more than 60,000 systems in more than 60 countries — that's roughly 10 megawatts of capacity. One example comes from Richmond, Va., where the city saved more than $600,000 in installation costs for more than 20 commercial grid-tied lights in a housing development project. (That's about half of what it would have cost to lay the wiring for grid-tied alternatives.) The systems have an estimated lifespan of 30 years, and have back-up batteries that can keep them running for up to five nights without being recharged by the sun.

"As much as we are a solar lighting business, we are also a wireless company and this is what people see first," said Dibs Tailor, president and CEO of Sol Lighting.

Just one week into 2014, dynamic glass technology company View disclosed a massive $100 million investment from Madrone Capital Partners — the largest round of funding in the company's history. It previously raised $125 million, including $60 million from Corning.

"As our project pipeline continues to grow, this investment will enable us to accelerate our growth, expand our market presence and continue to serve our broadening customer base," said Rao Mulpuri, the company's CEO, in a statement.

View Dynamic Glass works by regulating the amount of heat and glare that permeates into a building, which helps occupants make better use of daylight and natural lighting. This, in turn, reduces the amount of electricity that must be used to cool or heat a building, or to light it up, by an average of 20 percent. So far, View's glass has been installed in 50 projects at corporate campuses, educational institutions, government buildings, hotels and hospitals.

The market for electrochromic glass windows is expected to reach $2.1 billion in sales by 2017, predicts research firm Nanomarkets. Considered another way, the worldwide demand for smart glass could top 3 million square feet by 2020, according to forecasts from Navigant Research.

Aside from View, one of the best-backed players in this market is Sage Electrochromics, which last year opened a manufacturing plant in Minnesota capable of producing up to 4 million square feet of smart glass annually. 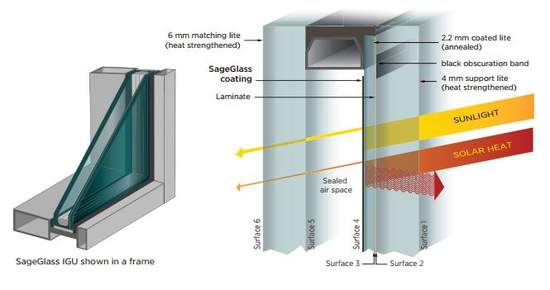 In January 2012, researchers at the Fraunhofer Institute for Industrial Engineering IAO demonstrated a prototype of a "virtual sky," a ceiling made up of 34,560 LEDs that create diffused lighting across the entire color spectrum. The idea was to create an indoor environment that could echo natural lighting conditions found outdoors, even mimicking the effect of a cloud obscuring the sun on an otherwise bright day.

"The LEDs allow us to simulate these dynamic changes in lighting in a way that is not directly obvious to the naked eye," said Matthias Bues, head of the IAO research team. "Otherwise the lighting might distract people from their work. But it does need to fluctuate enough to promote concentration and heighten awareness."

While this sort of concept is still "out there," Digital Lumens is discussing these sorts of applications with more than one client, said Tom Pincince, the company's CEO.

For example, schools are studying ways that lighting can be adjusted over the course of the day to enhance productivity. Hospitals and health-care providers, meanwhile, are testing ways to change colors in order to enhance patient well-being, or calm them to accelerate the healing process. "These are harder things to do … but we are looking at university research in this area," Pincince said.

Lights photo by Krasowit via Shutterstock