Bharath Kumar was furious that the lights went out an hour early. His candy-making operation in the village of Tamkuha, in northern India, had been plunged into darkness at mid-batch, forcing him to use a weak, battery-powered lantern to manage his boiling pots.

"If I knew that the power would be shut off an hour earlier, I would not have mixed the sugar in the flour," he fumed. "This is not the first time. I will keep a record of when the power is switched off every night and show this when they come for collections."

People everywhere complain about the power company, but Kumar's power company has an unusual challenge. Husk Power provides light bulbs and a small amount of electricity to about 200,000 people in 300 tiny farming villages across the state of Bihar that never have been touched by the electric grid. Each village has a generator powered by burning and gasifying rice husks, a byproduct of farming that otherwise is wasted.

The six-year-old company is one of numerous startups trying to build carbon-free or low-emissions microgrids to light up rural villages across India. The need is enormous. Roughly 300 million Indians living in 80 million households — about a quarter of the country's population of 1.2 billion — do not have access to electricity. According to the World Bank, per capita electricity consumption in India, centered mainly in cities and towns, is 684 kilowatt hours — just 1/20th of the United States' per-capita consumption of 13,246 kilowatt hours.

Nearly all microgrids in India are powered by solar photovoltaic panels, with the exception of 20 to 30 networks that run on hydropower in the states of Karnataka and Uttarakhand and the biomass-powered grids operated by Husk. To date, microgrids provide just a tiny fraction of India's overall power needs. Although no comprehensive statistics exist on the number of microgrids, a conservative count shows that they serve at least 125,000 households in India, divided mostly between large, government-sponsored projects in the North Indian states of Chhattisgarh and West Bengal and private ventures centered on Uttar Pradesh and Bihar. Uttar Pradesh and Bihar are among the most rural and least electrified states in India — a countryside packed with tens of millions of people, united by darkness.

India's Ministry of New and Renewable Energy, through its National Solar Mission, has set the highly ambitious goal of replacing kerosene lamps with 20 million solar lighting systems — powered by microgrids, solar panels on individual homes or solar lanterns — by 2022. The microgrid sector is dominated by smaller enterprises such as four I visited in India: Mera Gao Power, Naturetech Infrastructure, Minda NexGenTech and Husk. Most microgrid entrepreneurs hope their trajectory will follow that of the mobile-phone industry, which starting in the late 1990s transformed life in the countryside by bypassing land lines and enabling villagers to communicate with the outside world. The goal with microgrids is to bypass altogether India's inadequate power system and troubled grid.

"We argue that that villages and remote hamlets that are off the main grid can leapfrog into sustainable power access via solar PV (photovoltaic) mini-grids as a long-term solution rather than as a stop-gap until the time the grid comes," says a report on solar microgrids written by the Observers Research Foundation of Mumbai. "An Energy Revolution akin to the Green Revolution in Agriculture in the '70s needs to be brought about."

Microgrid companies such as Mera Gao Power offer a modest and rapidly installed infrastructure, serving as few as 20 customers from a small set of solar panels that often produce only a few kilowatts. One day in a village in Uttar Pradesh, I saw how easy it is to install a microgrid. A team of four workers from Mera Gao strung lights to about 40 households. They attached the cables along house eaves and through the trees. (In other towns, installers use the abandoned poles of failed government power projects.) With the addition of two solar panels and a bank of lead-acid batteries, the system was good to go.

Mera Gao's customers pay about 100 rupees — $1.60 — and receive enough electricity to power two LED lights and a mobile phone charger for seven hours a night. Husk can supply about 400 households from one of its rice husk gasifiers. Two stories tall and painted green, the gasifiers are usually situated near the center of town, next to a giant pile of rice husks and surrounded by a rickety fence. Also for 100 rupees, a Husk user gets two CFL light bulbs and a cellphone charger, along with a power cable that supplies electricity for five hours a night. 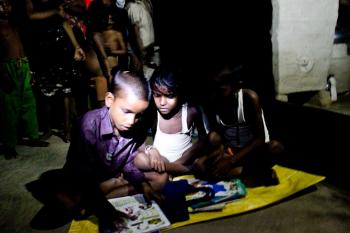 The potential market for microgrids is huge, and the prospect of so many customers has made microgrids primarily a private-sector and profit-motivated enterprise. The leaders include small startups hoping to do social good, a multinational solar power company and veterans of the cellphone industry. A report by the World Resources Institute and the Center for Development Finance estimates that the market for microgrids in India and other clean energy consumer products could reach $2.1 billion annually.

These startups' prospects might be extinguished in a moment if regular power lines marched into the villages. But the electrical grid in India already is overtaxed; an estimated 25 percent of India's power generation capacity is underused because of fuel shortages and other problems. The main supplier of power in India — the coal industry — also is hobbled by deep structural problems and the growing reluctance of international funders to build new coal plants.

By illuminating an entire village at once, a microgrid can spread light more quickly than handouts of solar-powered lanterns. It also can scale up far faster than traditional power lines, often promised in India but seldom delivered. By deriving their power from biomass or solar panels, microgrids raise the possibility that large regions could stay off the coal-fired power grid forever, shaving a significant chunk off the world's future carbon budget. Whoever finds the business model for providing cheap, reliable, local power will help pull 300 million Indians from the 19th century into the 21st century, with vastly expanded opportunities for education and commerce.

Debajit Palit runs the rural lighting program for The Energy and Resources Institute in New Delhi, a nonprofit that has provided thousands of solar lanterns to some villages and built microgrids for about 160 others. He sees the microgrid occupying a unique niche in India's power system. In general, electrical service from a solar-powered microgrid costs the equivalent of 50 cents per week, or four to five times more expensive than grid electricity, which is heavily subsidized. On the other hand, it is far cheaper than a solar lantern, which might cost a villager more than $30 to buy — and then might break.

Palit projects that the microgrid and the regular power grid might one day converge on the same village and complement each other, making the village's power supply cleaner and more robust.

As I saw during a recent tour of a dozen villages, however, building a thousand grids of light won't be easy.

Until Husk arrived five years ago, Kumar and his fellow villagers never had seen a power company. Their lighting options were kerosene lanterns, which produce feeble light and pollute a home's air, or diesel-fired generators, which are expensive and getting pricier to run as the government pulls back on fuel subsidies. Charging a cellphone often required taking a trip to a bigger village. 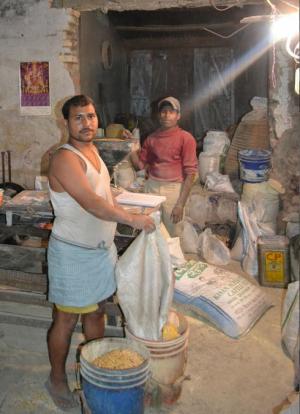 Microgrid installation may be easy, but that is often where the simplicity ends. Some high-caste farmers demand that lines be rerouted because they can't bear to have electricity flowing from the house of the low-caste cobbler next door. Some Hindu neighborhoods don't want to be on the same grid as Muslims. One resident who breaks the rules and takes too much power, for a ceiling fan or television, can make the whole grid crash.

Then there is the raw frontier of renewable energy. The North Indian winter can offer a month of nonstop gray skies, which is a problem for solar systems that need three hours of sunlight to store enough energy for the night. Husk Power's demand for rice husks — once not even useful for cow fodder — has started to drive up the price, forcing the company to hunt for corncobs or river grasses that have even less market value.

But the biggest difficulty by far is getting paid. India's farmers have irregular incomes and aren't used to monthly bills. In tiny hamlets, forgiving one person's debt means that next month no one will pay.

This has forced microgrid entrepreneurs, many of whom got in the business for social good, into uncomfortable new roles as debt collectors. In response, they have sought out new models that assure payment, from installing meters that dole out electricity in chunks like a prepaid cellphone, or hiring local franchisees that can use their stature to bring deadbeats into line.

Finally, some rural Indians, including Kumar the candymaker, are not necessarily impressed by the deal they get. "It is good, but the power is shut down at 10 p.m.," said a doctor named Mustakim in the Uttar Pradesh town of Attadhani. "The patient's illness does not know this time. I need something that gives me light when I need it."

However, many of these new electricity customers told me their lives had turned immediately for the better. In Attadhani, one shopkeeper told me sales were up at his kiosk because customers actually could see his merchandise. Meanwhile, the wares at a competitor's stall a hundred yards away were barely discernible in the dim glow of a kerosene lantern.

A teacher and village doctor in Purva Ghat, a tiny township in Uttar Pradesh, said his patients complain less of coughs now that they're not burning kerosene, and that the children get more homework done because the parents aren't worried about lantern fuel running out.

And in the village of Muglinkuha, I was led into a dark room where women knelt over a purple sari glowing under the beam of LEDs. The women were gluing jewels onto the fabric's printed pattern, work they previously couldn't do at night because the lanterns were too dim.

For now the microgrids have their circuits full providing only a few watts for light bulbs and cellphone charging. But, just like their cousins in the cities, rural customers inevitably will want more electricity to power refrigerators, fans, TVs and other energy-draining appliances. It remains to be seen if solar- and biomass-powered microgrids eventually will become robust enough to give it to them.

"They want light, they want fans, they want TVs," said Padu S. Padmanaban, an energy adviser with the U.S. Agency for International Development in New Delhi and program director of the South Asia Regional Energy Initiative. "They want a [light] switch."

New rungs for the unelectrified to climb the solar energy ladder

Caterpillar, Honeywell bet against the grid in emerging economies

Building a Microgrid in a day to power VERGE