Want to make money from a tree? You'll probably need to cut it down. Live near a salmon or tuna fishery? Send out the boats and fishing nets for your livelihood.

We know intuitively that there's a value to managing wildlife, forests, water and other environmental resources more sustainably. But the trouble is that most economic assets don't give individuals or businesses credit for doing so.

The good news is that more companies and investors want to change the system. Some of these early leaders make up the Natural Capital Leaders Index, launched in late January by GreenBiz Group and Trucost. There are two components to the methodology: an efficiency leaders ranking, which recognizes companies that use natural capital most efficiently to generate revenue over the past year; and a decoupling leaders list of businesses that increased sales during the past five years while decreasing their environmental impact.

Beyond the index, however, there's also an ambitious effort underway to help companies and investors put a more specific price on the benefits derived from natural resources or societal assets.

The Intrinsic Value Exchange (IVE), launched in May with a crowdfunding campaign on Indiegogo, would create an online trading exchange where investors could buy and sell these assets in the same way as a traditional stock or commodity futures market. Originally slated for a beta release late last year, the San Francisco-based organization now hopes to begin testing its first products by June, said IVE co-founder Douglas Eger. 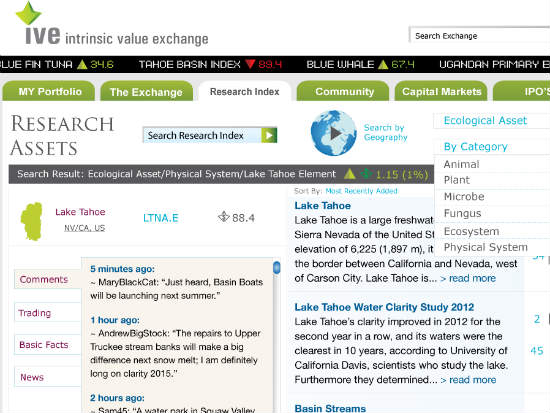 IVE's mission is "transform intrinsic value into financial capital for natural and societal assets — things like clean air, water, wildlife and human potential," according to its website. "This transformation provides direct incentives to protect and invest in these assets and opens a powerful pathway to sustainable economic growth that is in step with ecological and societal values."

Eger said: "Capitalism says that capital is the most important thing in an economy. Nature has a seat at the table, too."

To take the example of a tree, the IVE marketplace might value an individual tree at $400 if it is used for lumber but set its worth at $50,000 as part of a forest that plays a role in sequestering carbon dioxide emissions. Another example might involve a body of water, such as Lake Tahoe. All sorts of "values" could be assigned related to potential tourism revenue or the region's role in managing forest fires. Right now, there is little consensus on the financial value of these things, but IVE would change that.

"The environmental community traditionally has been focused on negative externalities, the effect of regulations or taxes," Eger said. "What if we could value the positive instead?"

Seems like a pretty wild concept? If you think about it, so is the idea of trading futures in agricultural commodities that won't be harvested for months. Yet many businesses use this system to arrange for the raw ingredients in food or for other products, paying particular attention to how those contracts affect the bottom line. "The group that gets it is traders," Eger said. 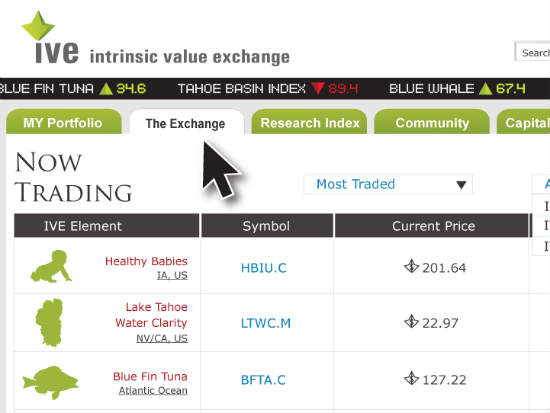 Eger is an entrepreneur who has been involved in technology development, film production and was previously the chairman and CEO of contract manufacturer Sheffield Pharmaceuticals. His background is in business and finance but his heart always has been interested in a "thrivable future." His partner, Cristina Khuly, is creative director for studio Entertaining Ideas.

A number of things need to fall into place for this to work, Eger acknowledged. For one thing, there must be a standard way to define and account for the assets that might be traded — spanning everything from a species such as bats to even the human potential associated with environmental conditions near a particular community or natural resource. This is something that IVE has been discussing with Natural Capital Project, developer of a software application for assessments called InVEST (also known as Integrated Valuation of Environmental Services and Tradeoffs), Eger said.

Eger said IVE is also engaged in ongoing dialogues with The B Team, a group of business leaders that includes entrepreneur Richard Branson, to build corporate interest in the concept.

The roughly $24,500 that IVE raised in its Indiegogo campaign was put toward the development of the trading platform. Rather than building this from scratch, IVE is partnering to create the framework. "The best way to characterize this is that the design has taken place," he said.

IVE still has plenty of work to do: finalizing its initial products, building general awareness with both businesses that could use the platform and with investors that might profit from it and, of course, with regulatory bodies. Its goal is to earn full approval through the Security and Exchange Commission (SEC) or the Commodities Futures Trading Commission. While nothing is a foregone conclusion as far as timing, Eger believes that the business world is ready for a different approach in valuing natural and societal assets.

"We've been living with this idea that the way you create wealth is by making something out of something else," he said. "But that system is showing more and more its dysfunction."

The emergence of natural capital consciousness

The pitfalls of putting a price on nature: What's next for natural capital?