The recent news that Google had acquired Boston Dynamics, the well-known robot maker from Cambridge, Mass., capped a year of frenetic acquisitions of no less than eight robotics companies in 2013. Boston Dynamics was a privately held engineering company that had developed the world's fastest robot, the Cheetah (29 miles per hour), as well as several others in its menagerie of animal-inspired bots: the Wildcat, the Mule and BigDog. It also developed Petman and ATLAS, androids based on that pesky species, Homo sapiens.

The funding for these all-terrain prototypes had come from Uncle Sam, via the U.S. Defense Advanced Research Project Agency. ATLAS, by the way, recently lost out to the S-One from another Google acquisition, Team Schaft, in the DARPA Robotics Challenge in December. Google will continue to honor these government contracts, but logically must have other ideas in mind besides battlefield maneuvers.

Or does it? After all, a robotics arms race does seem to be shaping up. Amazon's CEO Jeff Bezos just announced Prime Air, his own drive to employ aerial drones to deliver packages in 30 minutes. Like other companies, it's betting on gaining a new plateau of automation in the Internet of Things, one of five trends I recently wrote about.

Both Google and Amazon are similar in that they handle lots of items and success is measured in how efficiently one can move the most items, whether bits of data or books. Robots, of course, do this sort of thing very well, but it remains to be seen how they can be employed rather than deployed.

Whatever the case, the robot of the near future, and any system it is part of, will have been developed thanks in part to biological paradigms. It is worth taking a look some areas of current inquiry and speculating on what one might see in the future.

Small units of mechanical function acting together often have been modeled after the behavior of eusocial insects such as bees and ants. The controlling algorithms create a self-organization similar to the swarm that has distinct advantages in flexibility and diversity of outcomes. One example of a breakthrough artificial swarm is the so-called M-Blocks from Massachusetts Institute of Technology's Computer Science and Artificial Intelligence Laboratory (CSAIL). Research scientist John Romahishin has created cube robots with no external moving parts, but which are able to move and attach to each other and flip into various arrays.

A flywheel inside the cube spins at up to 20,000 revolutions per minute and then is braked. Just as your car would flip if you jammed on the brakes, so does the cube. The momentum generated by the flywheel is transferred to the cube itself, giving it movement. On the face and beveled edges of the cube are magnets that attach it to other cubes. The edge magnets are also rollers that allow the cubes to pivot on the bevel and keep a very strong magnetic bond during a position change.

At the just completed World Economic Forum in Davos, director of CSAIL Daniela Rus spoke to the delegates about the implications for manufacturing automation. Currently, when many products that are highly complex, short-lived or highly customized are made, as little as 10 percent of their parts are assembled by automation (some cell phones, for example). One obstacle to this is that the cost and time needed to tool new devices is not practical or warranted. If, however, computation could provide just-in-time information, then robots quickly could reconfigure from modules and provide the new capability within an efficient time frame. One robot array then could do all the assembly tasks, reconfiguring when necessary.

While metal cubes may not seem like the most bio-inspired form, the concepts that they are demonstrating are distinctly biological: minimum parts for maximum diversity based on array, and just-in-time information substituting for material and energy, to name two. The basic mechanistic devices we see today will pave the way for the more sophisticated biological solutions of tomorrow.

The race to the very small continues in science, and locomotion through the air is no exception. The advances in micro-circuitry, smaller power sources and the ability to see and analyze complex animal movements has led to a renaissance in the development of MAV's, micro-aerial vehicles. Last month in my annual Tommies awards, I highlighted TU Delft's DelFly Explorer, the world's first Micro Air Vehicle with flapping wings that can avoid obstacles by itself. Many other laboratories are developing such machines, including ones at Harvard, the Georgia Institute of Technology, Tankang University in Taiwan and the University of California, Berkeley. (Watch a video of the Explorer in action below.)

Beating flexible wings, rather than launching hard airfoils in a straight path or circle, has some advantages, chief among them being maneuverability and the savings in weight (and therefore energy). The potential for this type of vehicle does not seem to lie in scaling up a wing-beater into something that can carry a payload. The U.S. military, for one thing, already has a computer controlled unmanned helicopter that can lift two tons. Rather, it lies in taking advantage of small size and the flexibility of the swarm.

Hence, the MAVs will continue to enable better collection or disbursement of information, navigation through complex environments and quick reconfiguration for diverse tasks. An example might be in a search and rescue mode. Here a flock of small aerial vehicles would disperse in search mode, sending individuals into small spaces for likely victims, and then coalesce into a few compact flying bodies in order to direct ground crews and communicate with the victim. Militaries across the globe are keen to use them as spies and scouts, and Great Britain has used small flying scouts in tactical operations in Afghanistan.

Robots are increasingly losing their hard edges thanks to discoveries in materials and control mechanisms. The soft-bodied can be more durable, use less energy, and perform shape changes impossible for their rigid brethren.

One example from MIT and Seoul National University is the Meshworm, a flexible polymer tube that has been inspired by peristalsis, the sequential contractions of muscles. To the tube, researchers affixed nickel-titanium wires that they were able to tune the properties of by electrically induced heat. A phase change in the metal caused the wires to either spring back to their original shape after bending or retain a new shape. The wire configuration also mimicked nature by copying both the radial and longitudinal muscles of the earthworm. A small battery and circuit board provided power and control, and researchers have been able to move the worm by carefully controlling the expansion and contraction of the wire "muscles."

This work represents yet another step toward the truly organic, because it makes not only the body but the actuators flexible. Additionally, one literally can beat this device with a hammer and it still will be able to function. Speaking to MIT News, professor Kellar Autumn, discoverer of the Gecko Effect and researcher in biomechanics at Lewis and Clark College, said this type of soft-bot may have many useful applications, such as next-generation endoscopes, implants and prosthetics.

"Even though the robot's body is much simpler than a real worm — it has only a few segments — it appears to have quite impressive performance," Autumn said. "I predict that in the next decade we will see shape-changing artificial muscles in many products, such as mobile phones, portable computers and automobiles."

A world of their own

At the Bio-inspired Robotics Laboratory of the Swiss Federal Institute of Technology Zurich, engineers have designed a robot that can "grow" new parts or make new tools using a hot-melt adhesive. The robot, therefore, represents a further step toward independence, as it has the capability to adjust and adapt to real-time functional demands. Tool making always has been a criterion for judging the higher intelligence animals, so it is not a stretch of the imagination to envision the current capabilities coupled with increased cognitive awareness for the creation of quite sophisticated repairmen.

Reactive structures are another logical outgrowth of such research work. Growing to shape and in response to stresses is something plants do very well, putting material where it is most needed, and thereby also saving the energy needed to make the material. The progress in control mechanisms will have to be integrated with the development of universally applicable materials, perhaps at a finer molecular level, for the next level of sophistication in this approach.

Greater cognition in individuals can be enhanced, the researchers at Eindhoven University in the Netherlands believe, if robots are able to talk to and further learn from each other. They completed the first RoboEarth demonstration in January, in which they put the cloud-based network to the practical test. This network is unique because it will be used exclusively by the robots themselves. Four single-task robots were put in a staged hospital setting, downloaded each others' specs, and learned on the fly to navigate their surroundings, as well as to serve drinks and open medicines for their patient. Results, while mixed, suggest greater possibilities for a cloud-based hive mind of open architecture through which robots can talk to each other, learn tasks and get updated without being retooled. 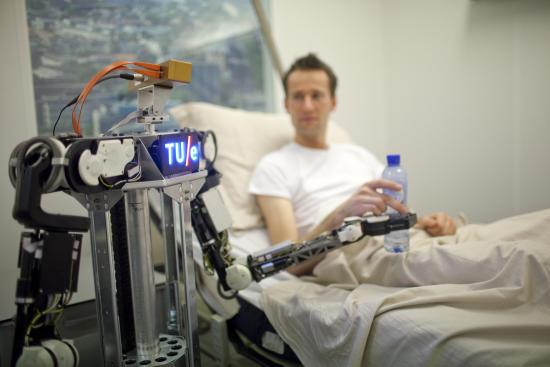 These areas of inquiry are yielding results that are shifting the concept of "robot" to a more bottom-up, flexible, smarter and independent variety of device. All of these characteristics can, of course, be modeled in nature. Robotics is one of the top applications for bio-inspired design, and is ranked second in the 100 most common topics in biomimetics behind "biomimetics" itself, according to writer BB Leopora in Bioinspiration & Biomimetics magazine. According to that publication, the term shows up in 13 percent of the titles in a database of around 18,000 publications on biomimetics.

Some of our best ideas in the field of robotics will continue to come from the nonhuman living world. The shape of future robots, therefore, probably will be markedly different from what we see today.