Necker Island, a small Caribbean island owned by business icon Richard Branson, has signed a contract to slash its diesel fuel use by building a renewable energy-powered microgrid.

On the surface, it may look like a way for Branson, founder of the Virgin Group, and the island’s visitors to lower their carbon footprints with an expensive project that has little relevance off the island. But project leader NRG Energy said the Virgin Group will save money by making the shift, and that islands across the Caribbean similarly can reduce energy costs by installing solar.

Part of the British Virgin Islands, Necker Island generates electricity with diesel generators, as most island nations do. Because of their reliance on imported diesel and heavy fuel oil, islands have some of the highest electricity prices in the world. In that part of the Caribbean, the cost of power can exceed 40 cents per kilowatt-hour, said John Bates, an NRG Solar executive involved in the project. The national average in the mainland United States is 11 cents per kilowatt-hour.

The contract signed between Virgin and NRG Energy is different from the power purchase agreements corporations typically sign when installing large solar arrays. Instead, NRG has committed to reducing fuel consumption by at least 75 percent through a combination of onsite solar, wind and batteries. The Necker Island project is meant to be a demonstration showing that transitioning island nations off fossil fuels is feasible and cost effective. It is part of the Ten Island Renewable Challenge, an initiative organized in part by the Carbon War Room, a nonprofit co-founded by Branson to achieve gigaton-scale greenhouse gas emissions reductions. 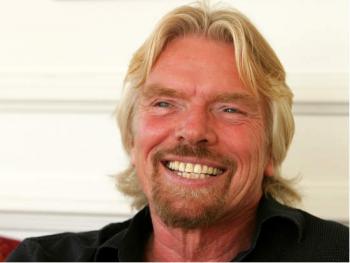 In the first phase of the project, by the end of this year NRG will install 700 kilowatts of solar, which is about 5,000 or 6,000 solar panels, said Bates. It also will install two shipping-container-size lithium-ion batteries that will act as a baseload power source to ensure a steady flow of electricity.

At full capacity, the solar panels will generate more power than the island normally consumes and the excess power will flow into the battery for use during cloudy times or at night, said Bates. In the next phase, three 100-kilowatt wind turbines will be installed in 2015.

Wholesale energy provider NRG Energy is notable within its industry because it's betting heavily on distributed generation, even though its primary business is running traditional centralized power plants. By doing this microgrid project, which will require working with at least seven technology providers and engineering groups, the company hopes to gain skills that it can apply both in other Caribbean nations and Fortune 500 companies, said Bates.

"There are 400 million people (for whom) solar is the right and cheapest source of power. It's a tremendous market opportunity for solar," he said. "The Caribbean is an unsubsidized market with great solar and wind resources and we believe it's a microcosm of the larger market."

Other islands in the Caribbean could generate 15 percent or 25 percent of their electricity with solar, which would lower their operating costs and not disrupt how the grid currently runs, Bates said. Large solar arrays could be placed in a few locations, so if there is a drop in solar power from clouds, the impact is easier to deal with.

"It's a matter of spreading out the solar system so the interconnects can manage it and you don't have a high sensitivity in one spot," he said.

But getting to 75 percent or 80 percent renewable power, as Necker Island intends to, requires a more sophisticated control system to manage the variations in power flow and big battery banks.

NRG is already in discussions with corporations with facilities in Central America, South America and the Caribbean to use renewable energy. Power prices in the Caribbean, for instance, are often higher than 30 cents per kilowatt-hour, while NRG could operate solar arrays and supply energy at about 20 cents per kilowatt-hour, Bates said. "The fact that we’re doing Necker Island is getting us smarter from a design and execution perspective," he said.

In some parts of the U.S., businesses and institutions are showing greater interest in distributed power generation because it provides better energy security from extreme weather events. During Hurricane Sandy, a number of high-profile cases, such as New York University and the FDA's Maryland campus, were able to continue providing power and heat during prolonged outages.

Island microgrids could emerge as important proving grounds for vetting distributed energy technologies. Because power prices are so high on islands, Navigant Research said that remote microgrids are attracting microgrid developers. For example, the Hawaiian island of Lanai, purchased by billionaire Larry Ellison, also intends to build a renewable energy-powered microgrid, but that project is still in the planning phase.