The higher education sector continues to be a leader in climate action, and through the American College & University Presidents' Climate Commitment (ACUPCC), more than 670 institutions are collectively taking meaningful measures to mitigate climate change. In the seventh year since the ACUPCC's formation, the network maintains its growth of signatory members and is progressively expanding its database of higher education's greenhouse gas emissions and climate action plans.

As demonstrated through the facts and figures below, there were many key achievements in the past year. In the new year, there will be more opportunities for continued successes.

The institutions that submitted at least two GHG reports present the following trends on their emissions:

• 8 show no change in their emissions.

• The cumulative emissions reduction from these institutions is 1,702,001 metric tons of CO2e.

The following figure highlights the net emissions reduction (in metric tons of CO2e) by the 492 signatory institutions that have submitted two or more GHG reports: 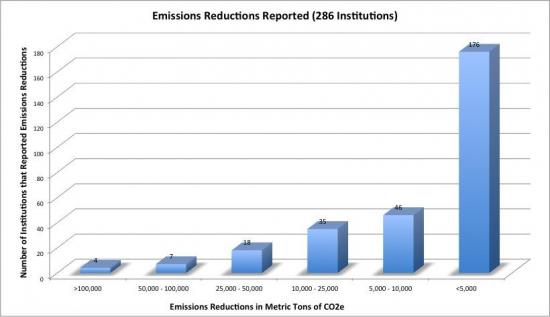 The following figure represents further breakdown of the 198 signatory institutions that reported increase in their operational emissions: 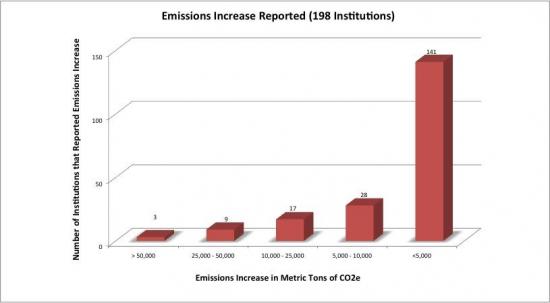 The trends captured in these figures show the ACUPCC's reduction of net greenhouse gas emissions, and are indicative of campus sustainability projects translating into tangible results. In time, there will be access to wider datasets, as a greater number of institutions start reporting on their progress; this will allow for a deepening of analyses and continued reporting on trends of the network.

Based on the net reduction of 1,702,001 metric tons of CO2e by the ACUPCC network, using the EPA Equivalencies Calculator, it can be said that the mitigated emissions are equivalent to:

• Greenhouse gas emissions avoided by recycling 637,454 tons of waste instead of sending it to the landfill.

Note: The ACUPCC is not responsible for the accuracy or validity of the data submitted by signatory institutions. The ACUPCC does not require institutions to verify GHG emissions or any other information submitted in their reports. However, it does encourage and trust institutions to submit the most accurate data available and to be transparent about their data collection processes.

University photo by AN NGUYEN via Shutterstock

Where do we stand in the terms of President Bush’s commitment to reduce the GHG intensity of the U.S. economy?

Will a cost on carbon darken the cloud?