"Why make something you can't sell?"

This is the question William McDonough posited about waste during the 2014 Executive Sustainability Forum webcast, hosted on GreenBiz and presented Jan. 30 by Waste Management.

Traditionally, businesses have strived to reduce or eliminate the waste they produce. But McDonough, influential designer, architect, entrepreneuer and co-author of "Cradle to Cradle" and "The Upcycle," thinks this is missing the point. Zero waste is "like going nowhere," he said. Instead, the focus should be a "cycle of endless resourcefulness."

Waste Management — which has partnered with McDonough to push for significant environmental aims — has shown how this principle can produce results. It recently worked with a Toyota plant in San Antonio, for instance, to turn waste produced at the plant into clean-burning fuel, which was then provided to another customer. In this way, the waste wasn't just reduced or eliminated, but actively reused.

Moving beyond zero waste requires a wholesale rethinking on what waste is and how it should be addressed. To help with the transition, McDonough provided these insights:

1. Move from a triple bottom line to a triple top line: The triple bottom line encompasses three aspects of a socially responsible and profitable business — economy, equity and ecology. These intersect in important ways; for instance, equity-economy could manifest as "Are men and women being paid the same?" while equity-ecology could be "Is it fair to expose people to toxins in the workplace?" When all these intersections are accounted for, it leads to a business that is socially responsible and makes money.

But according to McDonough, this isn't enough. For executives, it's not just about managing what exists — this is best left to managers — but about using waste as an asset in a top-line strategy to generate revenue. After all, McDonough said, "Businesses have to grow, or they die." 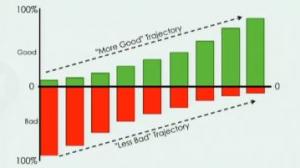 2. Don't just minimize negatives — also maximize positives: While it's great to do less bad things, it's also important to be aspirational — to not just reduce toxins, for example, but to create items designed to be positive for future generations. Or, put another way: "Being less bad is not also being good."

3. Be efficient and effective: Efficiency is doing things the right way; effectiveness is doing the right thing. Both must be employed for real progress to occur. As McDonough noted, if you do something criminal more efficiently, you're actually acting worse.

4. Embrace design, not regulations: There are two syndromes of survival — commerce, which is typically quick and effective, and guardianship, which is slow and reserves the right to kill. Instead of focusing on regulations, businesses should design things that require less regulation in the first place. "Design is the first signal of human intention," McDonough said. "Regulation is a signal of design failure."

5. Start with values: When implementing green principles, begin with a values set. When Ford installed the largest green roof in the world, for example, it started by asking questions such as "What if birds want to land here?" and "What if people want to work here?" The key, McDonough said, is to focus on "sustaining values-based innovation." 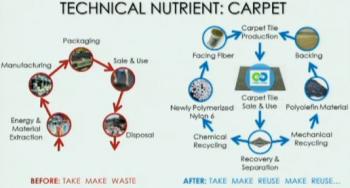 6. Think of waste as food: By thinking of waste as food and the materials as nutrients, it's possible to move from a "take make waste" cycle to the more productive "take make reuse make reuse." McDonough and chemist Michael Braungart once worked with a textiles company, for example, to turn the trimmings of textiles into nutrients used by a local garden club, and the water from the mill into local drinking water.

By reimagining waste, McDonough said, companies can move from a "world of limits, where we're afraid, to a world of abundance, where we're excited and sharing." In other words, it's not about "how much can I get from what little I give?" but something altogether more powerful: "How much can I give for all that we get?"

Lessons from the frontlines of the next industrial revolution

Inside the Cradle to Cradle Institute