Patagonia, The North Face warm up to ethical goose down

Patagonia, The North Face warm up to ethical goose down

I live in Minnesota, where this winter schools repeatedly have been closed due to subzero temps with wind chills in the neighborhood of 40 below zero. If you've ever experienced such arctic-like conditions, you can appreciate the value of a high-quality goose down jacket impregnable from the cold.

But my endorsement of down isn't without some large and important caveats.

While down is also sourced from ducks, typically the term refers to the tiny puffs of feathers closest to a goose's underbody. These plumules trap warm air, acting as a terrific insulator against the cold.

It's the getting of the down that can be problematic, however.

In the last few years, the reputations of big brands such as The North Face and Patagonia were stained when the European-based animal welfare group Four Paws proved the down in some of the brands' products came from geese force-fed and live-plucked in Hungary. This flew in the face of assurances to the contrary that the companies had received from California-based Allied Feather & Down, a huge supplier of down. 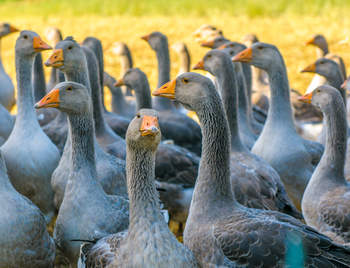 The practices are horrific. Gray geese raised for the French delicacy foie gras are force-fed several times a day via metal tubes jammed into their throats and eventually slaughtered for their fatty, swollen livers. As for the live-plucking, it involves workers ripping out feathers by the handful, a torture that often results in torn skin that's roughly repaired with a needle and thread sans anesthesia.

While force-feeding is legal in Hungary, live-plucking is banned in all EU countries. However, "harvesting" of down during moulting season is allowed, leaving space for interpretation. Sans enforcement, live-plucking is practiced in Hungary and to a lesser extent in Poland, where Four Paws says the practice is not prevalent among commercial flocks.

The good news is both The North Face and Patagonia have changed how they source down.

In November, Patagonia announced that starting this fall all of its down-insulated products will be sourced from birds that have neither been force-fed nor plucked while alive.

"From what we've learned, most of the gray geese are raised for foie gras. Most of them are in Hungary and so that's where the big risk is," said Wendy Savage, social and environmental responsibility manager for Patagonia. "So currently all our down is white."

Patagonia no longer sources down from Allied Feather & Down, but from farms in Poland where down from white geese is not harvested until the birds are slaughtered for their meat, Savage says.

"Our standards look at animal welfare not only for the issues of forced feeding and live plucking, but also for any other issues that could affect the animals," Savage said. The company makes sure, for example, that the birds have enough space to roam, that they're free, that they're not caged, that the transportation is appropriate, and that during the transportation they don't suffer. "There's all these other little areas in the animal welfare scope that we look at through our standards," she said.

The North Face announces its responsible down standard

More recently, The North Face announced completion of its global Responsible Down Standard (RDS), which it developed in partnership with the third-party certification body Control Union Certification as well as the sustainability nonprofit Textile Exchange.

"Working closely with both organizations, we developed standards that outline a process to effectively certify the source of down, ensuring it does not come from animals that have been subject to any unnecessary harm, such as force-feeding or live-plucking, and provides a traceability system to validate the original source of down used in The North Face products, essentially following the product from 'gosling to jacket,'" the company asserts on its website.

The North Face appears to be taking a pronged approach to deal with concerns about animal cruelty. In addition to developing its new RDS, the company recently received an award by People for the Ethical Treatment of Animals (PETA) for marketing its ThermoBall insulation as superior to down.

"Synthetics are actually superior in many ways. Down, first of all, is expensive. But it also becomes useless when it's wet, unlike the cruelty-free synthetic fillers such as the ThermoBall," said David Byer, senior corporate liaison for PETA. "Thinsulate [and] other brands can actually insulate in all weather, which is something that you don't see with down. Then you also get it cruelty-free."

According to Four Paws, outdoor European brands Mammut, Jack Wolfskin and Vaude are planning to take similar steps as Patagonia and The North Face, and also have committed to not use down from birds that have been force-fed or live-plucked.

"These companies have started to take responsibility for the welfare of geese and ducks in their down supply chain, which is a great first step. They will go beyond written promises by suppliers and plan to send auditors to check on the welfare of the animals. The extent to which each of the companies will purge live-plucking and force-feeding will unfortunately vary, [but] we are keen to see commitments and actions that ensure that 100 percent of the geese and ducks are safe from live-plucking and force-feeding," said Nina Jamal, a Four Paws spokesperson.

She says the animal welfare group has put out a best practice traceability system that sets an example of how to fully exclude live-plucking and force-feeding from sourced down.

"Patagonia is planning for full traceability in their standard and down that is 100 percent free of cruel practices," Jamal said, adding that Four Paws is still assessing the strength of The North Face's proposed standard.

"Four Paws is encouraged by the direction in which the industry is headed and will continue to call on outdoor brands, as well as the bedware industry, to avoid sourcing down from animal suffering. It will also propose best practice traceability to companies that have geese and ducks in their supply chain," she said.

Other companies drop down altogether

In spite of the progress some companies are making in responsibly sourcing down, it's tricky business and not every company wants to mess around with it. For instance, Coleman recently was lauded by PETA for its decision to stop selling down altogether once its existing inventory is depleted.

Byer says it's not just outdoor companies moving away from down, but also regular clothing retailers such as J.Jill and New York & Company; furniture companies including Woodley's Fine Furniture and Denver Mattress Company; and hotel chains such as Club Med, Diamond Resorts, Red Roof Inn and Motel 6, all of which don't use down bedding.

While Byer says companies "across the spectrum" are moving away from down, those instead choosing to oust cruelty from their supply chains — such as Patagonia and The North Face — can't watch what's happening on supplier farms 100 percent of the time.

"While we appreciate that the companies want to develop a more transparent down supply chain, the reality is that it's impossible to conduct audits across the global supply chain with the frequency and thoroughness required to ensure birds are not having features yanked out of their skin while they're still alive, or aren't having the tubes rammed down their throats for foie gras. That's why we're calling on all companies to do the right thing and drop down," he said.

PETA surely will have an impossible time convincing every company making down products to switch to synthetics. For one thing, some people appreciate the fact that down is the most eco-friendly insulator available. In fact, according to the International Down and Feather Testing Laboratory (PDF), down has the lowest carbon footprint of any fill material and is biodegradable. And because it's a byproduct of the food industry, it keeps materials out of landfills.

In addition, some consumers in cold climates simply will continue to demand it — me, for one.

A few years ago, a friend gave me a down jacket she no longer wanted. It's two sizes too big for me and I look ridiculous wearing it, yet along with my moose-hide Mukluk snow boots and my hand-stitched one-of-a-kind wool mittens, that down jacket is one of my most beloved possessions, because no matter how low the mercury drops, I can't feel cold or wind through it — at all.

I'm certainly open to experimenting with synthetic fillers to see if they can perform like my down puffer jacket, but honestly when it's as cold as it is in my part of the world, getting wet isn't an issue because every drop of moisture is frozen solid.

Even so, PETA and Four Paws have my kudos for trying to eradicate cruel practices involved in the harvesting of down. If I wear or sleep with down, I want to have a clear conscience about it.

Photo of goose down by AlessandroZocc via Shutterstock