Call it a detour, a hiccup or a temporary catching of breath.

Despite last year’s dramatic drop-off in newly installed renewable electric generating capacity in the United States, America remains in the thick of a far-reaching sustainable energy "revolution" with "major implications for the U.S. economy, energy security and global concerns over climate change," according to a new report by Bloomberg New Energy Finance.

The Sustainable Energy in America 2014 Factbook shows a seemingly ominous 70-percent collapse in overall renewable capacity additions in 2013 — all the way down to 5.4 gigawatts from a record 18 gigawatts installed in 2012. The report was commissioned by the Business Council for Sustainable Energy and released last week in Washington, D.C.

But total renewable generation, including hydropower, still rose to nearly 13 percent of the U.S. electric power mix in 2013, up from 12 percent in 2012 and only 8 percent in 2007, according to this second edition of the report, which forecast a return to growth for the U.S. wind installations in 2014 along with continued growth for solar.

Wind energy’s down year in 2013 was one of just a few "noteworthy detours" from the report’s central theme — namely, that "a revolution is transforming how the U.S. produces, delivers and consumes energy" and that these recent advances in energy efficiency, transportation and power generation “have combined to put U.S. CO2 emissions on a long-term downward trajectory.”

Among the 133-page report’s key findings are:

• Thanks to advances in energy efficiency, the country’s annual energy consumption in 2013 was 5 percent below 2007 levels.

• Over the same period, "use of lower- and zero-carbon energy sources has grown, while major energy sources such as coal and oil have experienced significant declines." 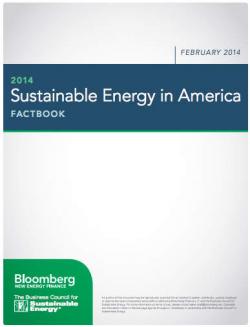 • Natural gas demand experienced an all-time high in 2013 and is on pace for growth again in 2014 — expanding in part as a replacement fuel for oil in transportation and coal in electricity generation.

• The transportation sector "is being revolutionized by new policies, technologies, and fuels," with fuel economy standards set to double by 2025 from 2011 and sales of alternative-fuel vehicles rising sharply.

• U.S. greenhouse gas emissions reductions have fallen 9.8 percent since 2005 and are more than halfway to President Obama’s stated goal of a 17-percent reduction by 2020 compared to 2005 levels.

• Fueled by small-scale PV at residential and commercial buildings, "distributed generation emerged as a transformative phenomenon — if not yet in substance, then as a foreshadower of what’s to come."

Changes are 'profound' and 'abrupt'

'The changes unfolding in the U.S. energy industry have been profound and, by the typical time scale of the industry, abrupt," said Michael Di Capua, head of North American analysis for Bloomberg New Energy Finance, and one of the report’s authors, in a statement.

"The effects of these changes will be felt in seemingly every nook and cranny of the American economy, from military bases to manufacturing plants, from homes to highways," said Di Capua. "2013 saw some detours from the long-term trends, but overall, it is clear that the long-term transformation of how the U.S. produces and consumes its energy continues."

Lisa Jacobson, president of the Business Council for Sustainable Energy, a Washington, D.C.-based coalition of companies and trade groups from energy efficiency, natural gas and renewable energy sectors, called on U.S. legislators and policy makers to "clarify and stabilize clean energy policies both at the federal and state levels in order to accelerate America’s energy transformation."

Top image of matches by Chones via Shutterstock

How do you bring electricity to 620 million people?