In the energy and utility consumption of multifamily buildings, the drive to provide better analytics and business intelligence is accelerating. Two upstarts in this space — WegoWise and Retroficiency — have forged new services relationships within the past month.

The first deal, announced this week, will see WegoWise team up with Steven Winter Associates to help owners in New York City comply with a local ordinance that went into effect in 2011. It requires the disclosure of energy usage for any building more than 50,000 square feet in size, which applies to roughly 16,000 properties.

Together, WegoWise and Steven Winter have developed a benchmarking service that will collect and aggregate the utility data from each building and submit the report on the owner's behalf. The service isn't just focused on compliance: It also provides data visualizations to help owners understand which buildings are most efficient; ongoing monitoring that alerts managers about anomalies; and audits that prioritize capital improvements that could drive better performance and suggest financial incentives that could help pay for them.

"We've been working with building owners in New York to drive sustainability initiatives for decades," said Marc Zuluaga, vice president and director of multifamily energy services for Steven Winter, in a statement about the new relationship. "As property owners began evaluating their energy use under Local Law 84, we saw a strong demand in the marketplace for a comprehensive solution that helps reduce utility costs. We built this joint offering to meet those needs and take building efficiency projects from conception to completion."

In fact, as of December, WegoWise's database included information covering more than 17,000 buildings and 1.6 million utility bills across the United States — everything from electricity to natural gas to water. Its service costs $6 per building per month, said Barun Singh, WegoWise's co-founder and CTO. 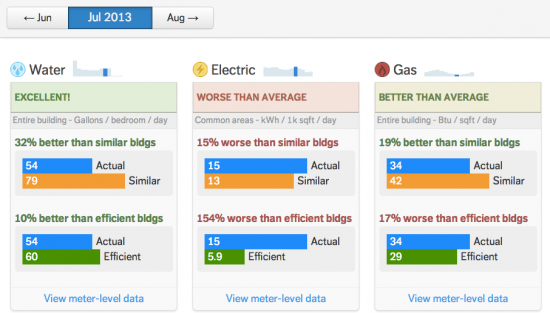 January is the cruelest month

Intuitively speaking, you probably already figured out that the winter season can drive a tremendous spike in utility costs, but WegoWise's data helps quantify those increases. During those months, the least-efficient buildings use around eight times more gas, five times more electricity and four times more oil than properties that have been upgraded or tuned for efficiency, according to WegoWise statistics released in December. This isn't just in places where winter is the coldest: Even in California, utility customers use way more gas during this season.

Commenting on the WegoWise data, Cleantech Group research analyst Natalie Volpe said: "Building retrofits and related intelligent controls can often lower energy consumption by up to 20 to 30 percent. Those savings can be even greater during the winter months due to the heightened use in heating and lighting, some of the largest loads in buildings. The difficulty is in convincing building operators and property managers to invest in these projects in order to achieve those energy reductions."

One example of a multifamily building manager that has benefitted from the insights provided by WegoWise benchmarking is Corcoran Properties. It used the service to help water system retrofits that have saved the company more than 345,000 gallons of water annually. Not only did this drive a 32 percent reduction in its water bill (or about $10,000), it also slashed electricity consumption in those buildings by 21 percent, WegoWise reported.

Helping multifamily building owners identify potential savings is the focus of a new relationship between Retroficiency, which has designed an analytics platform used by utilities and energy efficiency service providers, and Conservation Services Group (CSG), which focuses on building audits and helping owners find incentives that can help fund efficiency programs.

The deal is meant to reduce CSG's auditing time and expenses. CSG specifically will use Retroficiency's Automated Energy Audit solution. As of January, the company's services had been used to analyze more than 1 billion square feet of real estate. 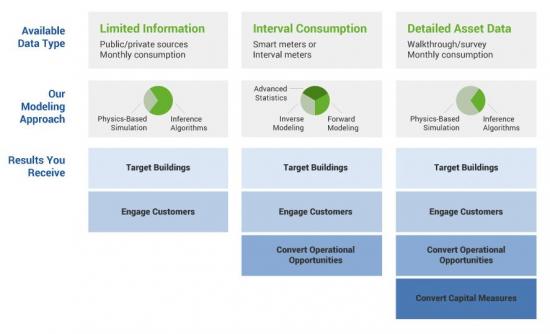 Other emerging purveyors of building analytics, energy management and remote auditing services, including FirstFuel Software and BuildingIQ, likewise have reported an uptick in the use of their services the past 12 months — although these services aren't as specifically focused on multifamily properties.

"Throughout the year, customers have committed more than 5.5 million square free of commercial space for us to manage, 60 percent of which was added in the fourth quarter alone," said Michael Nark, president and CEO of BuildingIQ, upon announcing the energy management company's 2013 results in late January. "This square footage is a combination of a variety of different spaces, including resorts, casinos, education facilities and our first health-care facility."

BuildingIQ's software helps owners predict consumption for a building's heating, ventilation and air-condition loads and optimize them, driving cost reductions of up to 25 percent.

Meanwhile, FirstFuel's remote building analytics services have been deployed by more than 15 utilities and government agencies in North America, where the company said it has been used to identify more than $250 million in annual energy savings. For example, the General Services Administration (GSA) — the second biggest property manager in the United States — already has identified $14 million in energy savings opportunities, while reducing the cost of this analysis by $13 million over on-site audits.

Toolkit photo by Maxx-Studio via Shutterstock

Why crossing silos is the top job of a smart city

Get ready for the 'Internet of Energy'