Americans will spend $3.9 billion buying jewelry for Valentine's Day, according to the National Retail Federation. That's in spite of the fact that the mining for precious metals and gems for jewelry can have serious environmental and human rights implications.

That said, plenty of good news is coming out of the jewelry industry.

Do a Google search for "eco-friendly Valentines," and you'll surface scads of websites making recommendations and selling green gifts.

As for the demand for responsibly sourced jewelry in particular, one of the top three online jewelers — San Francisco-based Brilliant Earth, known for ethically sourced bling — says it has been growing steadily since launching in 2005. It sees Millennials — people born between the early 1980s and early 2000s — particularly interested in where the material in their jewelry comes from.

"That type of generation is much more concerned about the impact that their purchases make on the world around them," Brilliant Earth co-founder Beth Gerstein said.

Dr. Wendy Patrick, prosecuting attorney by day and business ethics professor at San Diego University by night, agrees. She regularly polls her students about whether they would pay more for eco-friendly products, and the majority say they would.

"It's such a sign of the times that people care about making sure that they're purchasing something that isn't going to pollute the environment, that isn't made in a place that uses factory workers that put other people out of jobs or child labor or whatever it is," Patrick said.

This growing consumer concern about issues involving the environment or labor is now at a level where companies are specifically marketing to them. "There are all these sites that have the green Valentine," Patrick said. "It's so trendy." 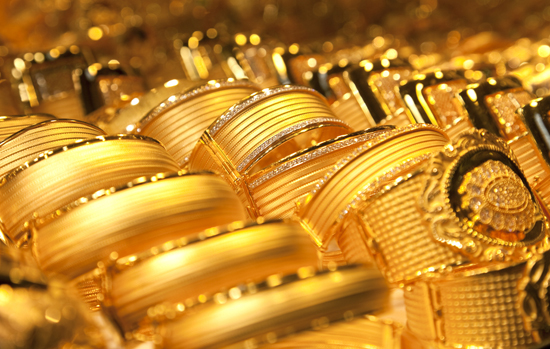 According to the nonprofit Earthworks, more than 100 jewelry retailers have agreed to the Golden Rules of its "No Dirty Gold" campaign. This pledge specifies that adherents will respect basic human rights; won't locate mines in areas of conflict or high ecological value; won't contaminate the water, soil or air with toxins; and will disclose how their operations are affecting people and the environment.

Brilliant Earth, also on the list, takes a different tack from many other jewelers. It mostly only uses recycled and re-refined gold and platinum from the start, in addition to a collection of fair-mined gold it gets from co-ops that meet standards established by the Alliance for Responsible Mining.

"Most of the approach that we take is for recycled [gold] because in our opinion, if you can re-refine [it to] the same quality [as mined and refined gold] we certainly think it's a much more sustainable approach, which is why the majority of our jewelry is focused around the recycled component," said Gerstein.

Aquaculture gets a bad rap for harming the ocean environment. Sometimes it should get props instead.

For instance, the Tiffany & Co. Foundation is funding a research project working with pearl farmers in Switzerland, Japan, the United States and the Asia-Pacific region to promote responsible pearl production. It aims to study sustainable practices in the marine-cultured pearl industry, then to draft sustainability standards, to explore where responsibly produced cultured pearls fit within the supply chain, and to investigate traceability.

For example, the family-run Kamoka Pearl in Tahiti is attempting a less-polluting way of harvesting pearls.

Whereas some oyster farmers bring mollusks onto the deck of a boat, then power spray them to remove barnacles and other marine organisms — creating overly nutrient-rich lagoons — Kamoka Pearl instead moves mollusks to shallower waters, where abundant fish scour them clean. (See this National Geographic Daily News story for more.)

"What's really cool is that, because there are different kinds of fouling organisms on the oysters, they feed different kinds of fish," Josh Humbert, manager and owner of the family-run farm, told National Geographic. "You get a fair distribution of food, and we started seeing the numbers of fish getting stronger."

Brilliant Earth, which sources some pearls from Kamoka Pearl, brags about the farm's practices.

"They have electricity that's supplied by solar wind power," Gerstein said. "They harvest their rain water to provide fresh water. They're very careful about not destroying the ecosystem for the oysters in general. So it's really cool." The Leonardo DiCaprio movie "Blood Diamond" helped to drive consumer demand for ethically sourced jewelry. The 2006 film spotlighted the atrocities often involved in African diamond mining. The meeting depicted at the end of the film, held in Kimberley, South Africa in 2000, was the genesis of the Kimberley Process. Its purpose: To ensure that only rough diamonds accompanied by a government-issued conflict-free certificate enter the diamond supply chain.

While the issue has been thorny, the flow of conflict diamonds in the marketplace has shrunk significantly since the implementation of the Kimberley Process Certification Scheme (KPCS) in 2003 — from 4 percent to less than 1 percent, reports the World Diamond Council (WDC). It represents more than 50 diamond industry organizations and was a key participant in developing and implementing the KPCS.

The KPCS has its critics, however. A December investigative report by the World Policy Journal reported that a Belgian company called Omega Diamonds made at least $3.5 billion in diamond profits disappear from 2001 to 2008 by buying African diamonds of questionable origin for next to nothing, shipping them to Dubai where they were legally given "certificates of mixed origin" — meaning parcels of diamonds purchased in Angola and Congo were repacked together without mixing the stones — then provided with a new Kimberley Certificate delineating that the shipment came from the United Arab Emirates. Later, the diamonds would be sold from Antwerp for more than their worth.

The Kimberley Process definition has enabled a 99 percent clean diamond industry to exist largely because the real violence of the industry is whitewashed, ignored, or excluded entirely from the framework — the criminal portion of which continues to exist entirely on the periphery. In the end, if the Kimberley definition remains limited to rebels, rather than the far broader array of often unsavory players who have forced their way into the industry, violating the letter and spirit of the system, there may be no fundamental way to save the diamond industry. The Kimberley Process as it is currently defined is a system that produces the wrong kind of results.

Other serious criticisms of the Kimberley Process have been raised. In 2009 the U.K.-based Global Witness, an NGO that led the campaign to create the certification system, decried the Kimberley Process for failing "to address issues of non-compliance, smuggling, money laundering and human rights abuses in the world's alluvial diamond fields."

Brilliant Earth's Gerstein said the Kimberley Process is ineffective and misleading to customers who believe their purchases are ethical, because it only addresses conflict diamonds that are used against recognized governments by rebel groups.

"It doesn't address any of the human rights abuses that are most prevalent," she said. "You have over a million diggers in west Africa making less than a dollar a day. None of that is covered. Child labor, forced labor, all of these major human rights abuses don't come close to being addressed."

In its defense, Steve Benson, communications director for the WDC, says that many African civil wars dried up from lack of funding after 2003 thanks to the Kimberley Process. And while the WDC acknowledges that the scope of the KPCS needs to be redefined, its original bylaws dictate that doing so necessitates 100 percent consensus from all of the participants who collectively represent more than 80 countries.

Speaking from personal opinion, and not representing the WDC, Benson told me he believes part of the problem lies in a difference in perception between two main factions within the Kimberley Process — western countries such as the U.S. and to a lesser degree the EU, Australia and African countries with acceptable human rights records, such as South Africa; vs. Botswana and Namibia, holding differing views.

The latter group, he believes, feel the diamond resources belong to the people of Africa and need to be leveraged to develop their economies. On the other side, western countries are more focused on consumer considerations such as product integrity.

"But I think what the Kimberley Process has shown is that over time, through dialogue, often these things take a long time to jell through discussion and arguments and people getting … angry but at some stage they do manage to reach common ground," Benson says. "And I'm guessing that over time this will happen."

Man-made, lab-grown diamonds that can be created in days rather than millions of years are a promising alternative to earth-mined diamonds and their many inherent problems. Lab diamonds are identical in all respects to the highest quality diamonds mined from the earth, with little environmental impact, compared with earth mining.

For the jewelry industry, Scio Diamond creates many hues of diamond: colorless or near colorless, through the entire diamond color spectrum as well as yellow, pink and various shades of brown.

While McMahon wouldn't discuss the cost structure of his product, he says most lab-grown diamonds for gemstones are less expensive than earth-mined ones.

Due to high demand, Scio Diamond's manufacturing facility is up and running all day and night, only shutting down two days per year for maintenance. He said power is the company's largest raw material.

"Our air from chemical usage when we clean the diamond is scrubbed in our fume hoods and non-toxic when it reaches the environment through exhaust," McMahon said. "Our liquid waste is completely neutralized before being discharged. We do have couple of chemicals that we use in very small portions, about a Mason jar full each day. Those are captured, contained and disposed of by a licensed environmental company."

Chains of Responsibility in the Jewelry Industry