Worldwide, tea is a phenomenon, drunk more than anything else but water. The world's 7.2 billion people drink 3 billion cups of the stuff each day with China, perhaps unsurprisingly, leading the way.

If you are reading this in the United Kingdom, then chances are you have made a cup of tea today. After all, two in three Britons drink tea every day, quaffing a massive 165 million brews — more than double the amount of coffee consumed. But this epic commitment to a brew still leaves this nation of tea lovers behind such unlikely tea havens as Russia, Turkey, Japan and even the coffee-obsessed United States.

To meet this huge demand, worldwide tea production has expanded to 4.8 million tonnes a year. But the sector is facing huge challenges, not least inter-linked pressure on land, energy and water from climate change and population growth.

Tea is grown in some countries most vulnerable to climate change. Assam, one of India's prime tea-growing regions, has seen rainfall decrease by more than a fifth over the past 60 years, while scientists predict Sri Lanka is likely to experience a 10 percent increase in the length of dry and wet seasons in its main tea plantation areas. Similarly, experts say the best areas for tea growth in Kenya are expected to shift to higher altitudes and potentially environmentally protected areas, while production could cease entirely in Uganda by the middle of the century.

Sarah Roberts, executive director of the Ethical Tea Partnership (ETP), says some of these impacts already are being felt.

"We are expecting tea growing areas to change with climate change," she says. "We are already seeing areas that are currently really optimal for tea shrinking and new areas open up."

Clearly, these impacts will have far-reaching consequences for the rural labor forces working on plantations and the huge numbers of small holders who may be less able to change production methods.

To help address the numerous environmental issues faced by the sector, industry giants — including Unilever (which produces PG Tips and Lipton), Tetley owner Tata Global Beverages and James Finlay,  as well as the ETP — recently have formed a new cross-sector partnership that aims to deliver a roadmap to develop a sustainable tea industry for 2030.

The Tea2030 partners have been brought together by Forum for the Future and have produced a report exploring the major risks to the industry and how to turn tea "from a standard commodity into a 'hero crop,' which benefits the millions who work in all parts of the industry as well as the wider environment and economy." 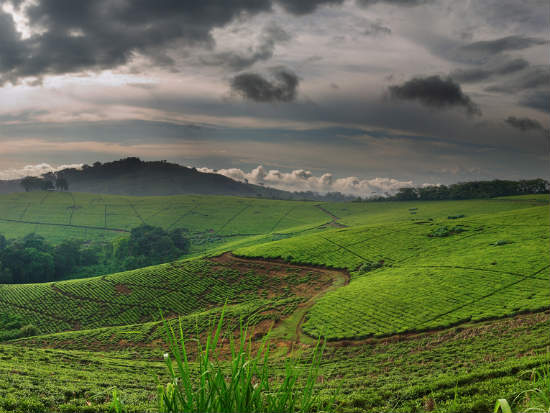 "There has been lots of great work in the tea sector, but it tended to be focused on specific issues — not sustainability in the round," she says. "It became clear the big players in tea have their doubts about the resilience of the tea industry and want to be sure the industry has thought about how these trends would play out.

"These collaboration platforms tackle challenges that aren't necessarily being dealt with by the industry as a whole. We're pulling together all players on the value chain, from producers to retailers to NGOs. We want the whole system in one room."

Uren is particularly excited about the impact Tea2030's work with consumers can have, given that packaging and boiling kettles account for the vast majority of tea's carbon footprint. She points to the success of the coffee industry as an example of a sector that has managed to get consumers to think differently about its product. After all, how many people now choose "quality" over instant coffee or remain unaware of whether their coffee is Fair Trade-certified?

"The tea industry hasn't engaged with consumers in a way that has brought consumers into the conversation," Uren argues. "We want to reframe how we use tea and deal with consumer uses such as tea bag waste and using a boiling kettle. We use a lot of tea and no one brand can tackle this on its own."

The aim is to repeat the success of the Sustainable Shipping Initiative, which started as a Forum project and has spun off into an individual charity to better achieve its goal of developing a profitable and sustainable sector by 2040.

"It could be that Tea2030 becomes an independent body protecting the interests of the tea sector," Uren says. "An umbrella organisation to ensure long-term sustainability of the tea sector that doesn't replicate work, but joins it up. Ultimately, we want to get to a point where all tea that hits the market is sustainable."

Top image of tea bag by Kasza via Shutterstock. This article originally appeared on BusinessGreen.