Precision agriculture is one of the unexpected bright spots in a new International Food Policy Research Institute (IFPRI) report that examines 11 agricultural innovations many hold up as the answer to the world's burgeoning food scarcity, water shortage and climate change challenges.

None of the technologies considered can address these concerns on its own, but taken in aggregate they could help improve global crop yields by up to 67 percent by 2050 while reducing food prices by nearly half, reports IFPRI.

"Advances in technology represent one of the most powerful resources for increasing yields and mitigating the impact of water scarcity and climate change," said Shenggen Fan, director general of IFPRI, during a press conference to discuss the report, "Food Security in a World of Natural Resource Scarcity: The Role of Agricultural Technologies."

The impact of doing nothing? As just one scenario, it is estimated that maize crop yields could decline by as much as 18 percent over that same timeframe, making it even more difficult to feed the world's growing population. "The cost of inaction could be dramatically negative," said Mark Rosegrant, lead author of the IFPRI report.

As you might expect, however, adoption of these technologies won't happen without accelerated private sector investments and changes in public policy and infrastructure priorities. 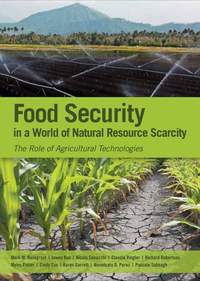 3. Drought tolerance — Plant varieties that can process available moisture more readily and that are less vulnerable to water deficiency

4. Heat tolerance — Varieties that can withstand or thrive in higher temperatures

6. Nitrogen use efficiency — Plants that respond better to fertilizers

7. No-till — Farming that involves little or no soil disturbance and potentially the use of cover crops

11. Water harvesting: Irrigation that uses earth dams, channels and other ways of directing water toward crops

"The reality is that no single agricultural technology or farming practice will provide sufficient food for the world in 2050," Rosegrant said. "Instead, we must advocate for and utilize a range of these technologies in order to maximize yields."

For example, under best case scenarios, no-till farming could help improve yields for maize by 20 percent by 2050, but layering better irrigation methods into those same fields could boost that improvement to 67 percent.

From an anecdotal standpoint, younger farmers are particularly interested in precision agriculture techniques because they have grown up around information technology, said Robert Carlson, president of the World Farmers Organization.

"Every farmer wants to improve their lives; they want to progress; they want a more secure future," he said.

In North America, for example, precision agriculture has been particularly useful as a measure for fine-tuning fertilizer placement and application, helping farms reduce overhead. Other experts participating in the IFPRI discussion point to successful applications in India and China as further evidence that precision agriculture may be catching on more quickly than anticipated.

Encouraging farmers to change their business practices simply to counteract climate change or food scarcity is likely to be a losing argument, however, according to several experts discussing the report. "I would think that famers would say that they would adopt these recommendations based on whether they will see a return on their investment," Carlson said.

One online modeling tool for doing that is IFPRI's AgriTech Toolbox, which helps farmers, researchers and policymakers analyze how various technology or agricultural practices could affect farm yields, food prices, natural resource use, land use, global trade, malnutrition and hunger. It covers 10 innovations discussed in the report.

IFPRI notes: "The AgriTech Toolbox allows you to work with these data directly. By selecting a country or region along with a technology, climate scenario, crop and water management practice— you can explore how key agricultural and food security parameters will change in 2050. This information may be used to develop investment strategies and scale up agricultural technologies."

These 21 projects are democratizing data for farmers

Is this how Monsanto can rehabilitate its image?