Install a building battery, save the grid?

Install a building battery, save the grid?

Having a backup battery to ride out a power outage is an obvious benefit to businesses. But distributed energy storage, particularly in combination with solar, has the potential to solve a host of emerging electric grid problems while making economic sense for businesses, say proponents.

The Solar Electric Power Association, an industry group for utility-scale solar, held a webinar last week on storage and demand response, a reflection of how important other distributed energy technologies are becoming to solar. Also last week, the Rocky Mountain Institute published a report titled Economics of Grid Defection, which argues that, as costs come down, businesses will be able to make their own "utility in a box" with a combination of solar and storage. 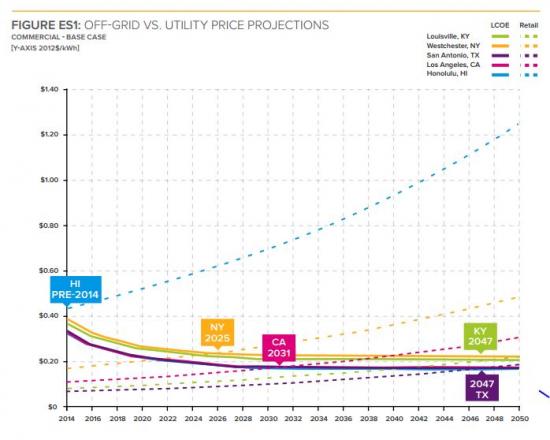 The case for batteries

Why would any business have an expensive battery installed at their premises? In some places, a battery can shave money from utility bills. Batteries configured to provide power during peak hours reduce demand charges, the fees businesses pay for the maximum amount of power used. A number of companies now offer distributed storage that lower demand charges, including Stem, Solar Grid Storage and Solar City, which uses the same lithium-ion batteries used in Tesla Motors electric vehicles. Tesla is making waves by planning a Gigafactory that it hopes will reduce the cost of lithium-ion batteries by 30 percent.

The emergence of distributed energy storage will make solar more compelling for business users, some experts say. Solar can chip away at overall kilowatt-hour usage while batteries and demand response can lower demand charges, which can represent about half of a commercial electric bill.

"I think the commercial solar market is about to see another resurgence," said Erick Peterson, vice president of sales and marketing at Demand Energy, which installs and operates energy storage systems. "Solar with storage is a way to achieve the most [significant] reduction in bills, and when it's combined with energy efficiency, that becomes very exciting."

Also, because storage can smooth out the variable output of solar panels, solar owners could lower bills in other ways, such as capacity charges, according to GTM Research. The company projects commercial storage will grow 34 percent annually between this year and 2020, with much of the activity focused in places with high demand charges, including California and New York, and the mid-Atlantic region, served by grid operator PJM. Companies in the PJM area can earn money on the wholesale energy markets providing demand response services, where batteries provide quick bursts of power to regulate the frequency.

If all this sounds threatening to companies with revenue tied to selling more electricity, it is. But distributed energy storage could benefit utilities and grid operators, particularly as more renewable energy and plug-in electric vehicles plug into the grid.

In California, a big challenge grid operators face is ramping up fossil fuel power generators to meet demand as the sun fades in the afternoon. A network of solar-powered commercial storage systems could step in during those hours, said energy consultant Doug Staker, who spoke at the SEPA webinar. Unlike traditional thermal power plants, batteries very quickly can deliver their stored energy as needed. "You reduce the system peak and remove the issue of the ramp rate altogether. It seems like a better way to run the grid," he said. 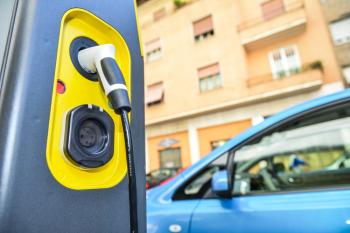 At the same time, if many thousands of electric vehicles charge en masse in the late afternoon and early evening, it will put a strain on local grids. Staker says solar arrays at businesses, coupled with batteries, will be able to meet the demand for charging while minimizing the impact on the grid at large. Other benefits to utilities include helping them handle high penetration of rooftop solar panels and using power lines more during off-peak hours for better efficiency, said Peterson.

For the most part, though, utilities are not active in distributed energy storage because current regulations don’t offer a well defined way for them to earn revenue from owning and operating this type of equipment. But that could change as the services batteries can provide become clearer, Staker said.

"There are utilities that are thinking this through and saying this is just part of a distributed system," he said, noting that utilities already operate millions of transformers distributed on their networks. "The opportunities are there. It's just a change of mindset and a change in the operating model, and helping regulators understand the realities."

The economics of distributed batteries, which still are expensive pieces of equipment, doesn't pencil out in places with low electricity prices and demand charges. But for businesses that already have efficiency programs, such as installing efficient LED lighting, energy storage and solar offers some new possibilities, Peterson said. And if configured for backup, batteries can keep the lights on when the grid fails.

Batteries photo by MortenHeiselberg via Shutterstock