Valentine's Day and Mother's Day stack up to make the first half of the year a big deal for the flower industry. But does anybody care about sustainability when it comes to this market?

I spoke with three distinct players in the flower space — a big retailer, a scrappy startup and a third-party fair trade certifier — and they all agree: Consumer demand for eco-friendly stems is on the rise.

Ideally, all the flowers for sale in an upscale natural foods store would be organic, but according to Carol Medieros, associate global produce coordinator for Whole Foods Market, the global supply is lacking.

"We care about it. … Whenever we can find a high-quality organic flower that our customers are asking for, we do support it. But because the supply is very small, we've looked to have sustainable flowers in other ways," she said. For example, it seeks out local flowers or those that meet the requirements of the company's Whole Trade Guarantee. 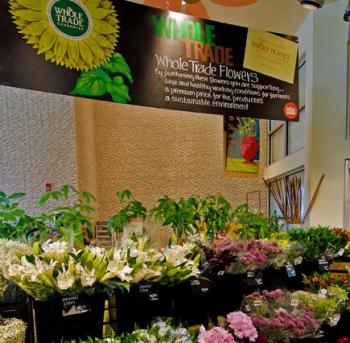 Local supply varies from store to store because the company has a strong focus on sourcing seasonal plants from farms near its stores, and those farms grow different flowers. "Different things are grown in different parts of the country, and sunflowers may be a real typical summer item, where something like peonies may be a spring item," Medieros said.

Whole Foods also sources flowers from developing countries and in 2008 added flowers to its Whole Trade Guarantee program, promising to ethically source flowers from developing nations. Through it, Whole Foods says it works with third-party certifiers to ensure a fair price is paid to producers; that farm laborers work in safe and healthy working conditions; and that the product is grown with environmentally friendly practices.

"We've seen rapid growth in that part of our flower department," Medieros said, adding that for every purchase Whole Foods makes, it supports community development projects at the origin farm. "Thanks to that program and our customers, we've generated more than $6 million in community development support. That's everything from education and housing to general improvements in the quality of life for a lot of farm workers, so we believe our customers are telling us they care," she said.

The online flower wire services FTD, Teleflora and 1-800-Flowers received a ton of bad press around Valentine's Day this year for high levels of customer dissatisfaction involving bouquets that didn't show up on the big day, dead or drooping flowers on arrival and other problems, such as broken vases or misspelled cards.

At least when it comes to late deliveries, you might be able to blame the weather, which dumped a foot of snow on much of the country the day before. But the problem is bigger than that, at least according to David Daneshgar, co-founder of BloomNation, an online local floral marketplace which launched in 2011.

These big brokers, he says, act as middlemen between consumers and local florists, charging florists a bunch of fees and taking a hefty cut out of their profits. At the same time, they don't provide transparency to customers in regards to which florist will fill their order or what the actual arrangement will look like. 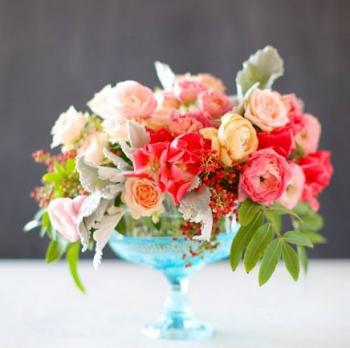 His startup takes a different approach: It displays photos actually taken by local florists so customers can see in advance what they're getting, as well as understand what shop will create the arrangement. BloomNation also charges florists 10 percent of the total order and even pays credit card transaction fees out of that amount, so the final cut is only 7 percent.

Daneshgar says less than 1 percent of the Valentine's Day orders that came through BloomNation resulted in some kind of complaint. "In every single case, BloomNation and that local florist reached out and it was resolved. As this point right now we have no complaints at all, which is awesome, and the reason why that happens is [the] whole 'go local' thing," Daneshgar said. "There's transparency so the local florist … is the first one who wants to step up to the plate because their name is on the line with BloomNation."

As for consumer demand for eco-friendly florists, Daneshgar says it's on the uptick, so much so that he hopes in coming months to add a little green icon next to the listings of florists that use sustainably sourced flowers. "One [influence] is the whole farm-to-table food movement that everyone's been seeing in documentaries, in books, everywhere," he said. "That analogy, that psychology have made it so easy for consumers to adopt the same rationale with flowers."

Billions of stems of flowers are imported annually into the U.S. from all over the world. But according to Fair Trade USA, flower production remains one of the most dangerous types of agricultural work because workers — mostly women — often receive poverty-level wages, work long hours and are exposed to harmful chemicals that can cause diseases such as cancer and asthma.

Yet heavy increases in volume of imports and sales indicate consumer demand for flowers is up, as is consumer awareness regarding fair trade.

"We just recently did a consumer study tracking awareness, and we found that through various marketing and education efforts and word of mouth — all these different ways that awareness gets spread — now about 50 percent of the U.S. population is aware of the Fair Trade Certified label," said Jenna Larson, PR manager for Fair Trade USA. "Back in 2012, it was 38 percent, so there is a growing awareness of fair trade. We also know that once people understand fair trade, they're much more likely to associate with that product and purchase it."

Since its floral program launched in 2007, U.S. consumers have purchased more than 50.2 million fair trade stems, resulting in $1.7 million in community development premiums for workers. As examples, Larson points to a couple worker committees in Ecuador that have voted to use their fair trade premiums in ways that specifically benefit female workers. For instance, a farm called Hoja Verde paid for cancer screenings for all its women.

"Several women had cancer detected, and they were able to be treated and essentially their lives were saved through this program that they voted for and implemented on their own through additional fair trade income," Larson said.

Workers on another farm called Agrocoex voted to use their premiums to purchase washing machines so women wouldn't have to spend their entire days washing clothes in a river.

Why Fair Trade is Thriving, Even in Tough Times