Not all power plants, but those that are turned on to meet peak demand or fill in for intermittent renewable energy. Because those power plants are used as backup they tend to be costly to maintain and are often older, dirtier fossil fuel plants.

AES Energy Storage has started selling battery banks to utilities and renewable energy developers in arrays that range from tens of megawatts (MW) to 500 MW, costing $10 million to $500 million. Batteries will store energy when it's inexpensive and release it to the grid during peak demand hours. 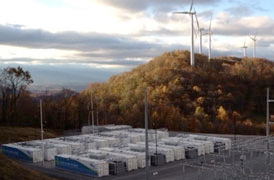 One of its projects is a demonstration project at 32 MW battery bank that supports a wind farm in Virginia (pictured right).

"We're competitive with power plants. People are really seeing that this could be part of comprehensive future planning for the utility sector," Chris Shelton, president of AES Energy Storage, told Bloomberg.

The company's "Advancion" system can supply power for as long as four hours at about $1,000 a kilowatt. That's close to the $1,350 a kilowatt from a recently built gas peaker plant, he told Bloomberg.

First products out of the gate are the same lithium-ion technology that's used in batteries for electric cars to laptop computers.

Advancion acts as both a generation and load resource, enabling more than twice the flexible range of a peaker plant on the same size interconnection, AES says. It is continuously available without burning fuel and designed with the ability to tap into existing unused capacity from efficient natural gas combined cycle power plants, solar and wind facilities. Unlike traditional power plants, Advancion arrays can scale over time with the ability to match required load growth in lock step.

AES not only supplies the batteries, it provides a turnkey service — handling siting, permitting, interconnection and facility design, construction and maintenance.

The company has begun selling systems in many markets: the region served by PJM Interconnection (largest in U.S.), Hawaii, California, the U.K. and Philippines.

Having sold 100 megawatts (MW) of batteries in the U.S., AES leads on battery-based energy storage in North America. Tesla could give them a run for the money when their Gigafactory starts producing batteries 30 percent cheaper.

"With the significant cost reduction in clean energy generation over the years, some consider lower cost energy storage to be the 'missing link' and one of the most challenging elements in the design and function of a clean energy microgrid," says
Gregory Barbour, executive director of Natural Energy Lab of Hawaii Authority.

3 reasons to get charged up about energy storage