Two decades ago, Levi Strauss & Co. shook up the apparel industry with water quality guidelines currently used widely across the apparel supply chain. Now, as scarcity concerns become more acute around the world, it is piloting ways to reduce fresh water used in its jeans-finishing operation by encouraging contract facilities to recycle wastewater.

It's the first time an apparel company has attempted to set standards within its supply chain for water reuse. Already, more than 100,000 pairs of jeans finished using 100 percent recycled water have been produced by the company's test partner in China, reducing the operation's fresh water draw by nearly 12 million liters (about 3 million gallons).

That's on top of the 770 million liters (203 million gallons) Levi Strauss has saved over the past four years through another initiative, its Water<Less jeans brand.

"This water recycling can happen over and over, significantly reducing the overall amount of water used to make our products," the company's sustainability team reports in a blog detailing the water recycling program. "As long as the water meets our standards to deliver the quality you expect from our brands, it can be recycled multiple times."

That's a notable achievement, given how much water the apparel industry uses — or wastes, depending on your perspective. For example, it takes 26 to 40 gallons of water to process about two pounds of textiles, which is one reason Nike is testing waterless dyeing techniques. The finishing process, like the ones used extensively to make your jeans that just-right shade of blue, also uses plenty of fresh water. 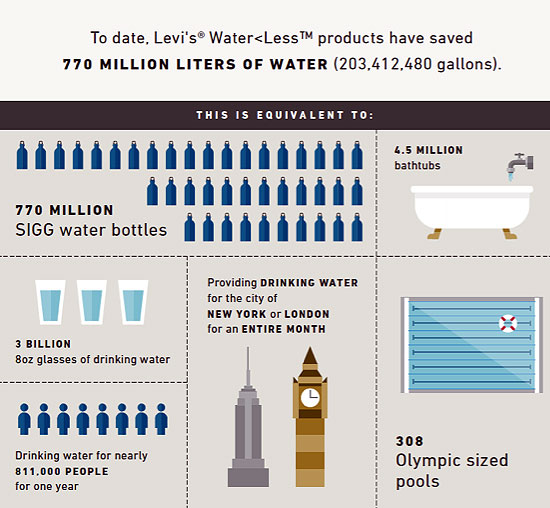 Expanding on the initial work by its Chinese partner, two additional facilities in Nicaragua and South Asia are retrofitting their operations to participate in water recycling, said Michael Kobori, vice president of sustainability for San Francisco-based Levi Strauss. The jeans maker works with about 100 industrial laundries globally where these processes take place.

"I was surprised by how interested [the facilities] are in working toward this. They really want to make it happen," Kobori said.

The interest is driven by two primary factors: first, a belief that these investments will money on rising costs for fresh water; and second, increasing evidence of water scarcity across many of these regions.

The investment for water recycling is not insignificant: The process requires additional piping to make sure supplies are identifiable, as well as test equipment to ensure that water is clean enough to be used in finishing processes. The first test involved 10 machines, about 20 percent of the equipment. Levi Strauss provided a technical expert who advised the partner on the installation. "It will be a challenge to get 100 percent recycled water in the entire facility," Kobori said.

In part, that's because as the mineral content of the water rises with each finishing cycle, it can affect the quality of the jeans. Eventually, fresh water will be required and the recycled water will need to be diverted for other uses on the site, such as for flushing toilets or irrigation.

A divining rod for water reuse

The document was released to BSR's Sustainable Water Group (PDF), where it has captured the interest of working group members including American Eagle Outfitters, Bestseller A/S, Burberry, Li & Fung and Nike, as well as companies such as Marks & Spencer and Nike. (It's also publicly available.)

The initial standard covers finishing facilities not currently recycling or reusing effluent water as well as those that are receiving reclaimed/recycled water or already reusing water. This is a very specific part of the apparel supply chain responsible for bleaching, stonewashing or treating garments with detergents and enzymes; or for dyeing and overdyeing clothing as it is cut and sewn.

The document covers (among other things):

• Allowable and prohibited uses for recycled water, along with suggestions for controlling public access.

• Parameters for how to handle on-site water recycling, including development of an industrial wastewater emergency plan, contingencies for supplemental water sources, testing and information management policies, and investments in laboratory equipment.

• Guidelines for landscape irrigation with recycled water, including timing that will minimize human contact, buffer zone restrictions and setback distances for nearby parks, playgrounds, cafeterias or other public areas.

How much influence can Levi Strauss hope to have with water recycling at the 100 facilities with which it has long-term relationships? It depends. Although the amount varies, the jeans maker can represent between 20 percent and 60 percent of the business managed by these partners, Kobori said. So, it's in their interest to pay attention.

For now, the recycling recommendations are cast as guidelines, which means they aren't mandatory. It's worth noting that's also how the company's 20-year water quality specifications were introduced. "Initially, they were best practices that we wanted people to implement. … A number of years ago, we made them requirements," Kobori said.

Jeans photo by Thinglass via Shutterstock

Levi's Latest Bid for a Greener Pair of Jeans

As Water Week Kicks Off, Corporate Leaders Share Their Successes