The first day of spring marked the end of an exceedingly strange winter in North America — from a seemingly never-ending winter east of the Rockies to severe, extreme and exceptional drought conditions all the way from Oregon to Texas.

Almost nowhere is it normal — unless, of course, this is the new normal.

Here in California, the epicenter of the drought, going on its third year, snowpack from the northern to the southern slopes of the Sierra Nevada mountain range currently measures just 16 to 32 percent of normal.

All of the state’s major reservoirs are well below average, creating migraines for the 440 municipal water agencies that supply about 90 percent of California’s water, as well as the 116 investor-owned water companies accounting for the rest.

Already in January — the driest on record for most of the state — Gov. Jerry Brown declared a statewide drought emergency and called on Californians to voluntarily cut water usage by 20 percent. The prevailing sunny and dry conditions since then — notwithstanding a few brief storms in February and March — have forced 30 public water utilities to date in the hardest hit areas, mostly in central and northern California, to impose or prolong mandatory water conservation measures, according to the Association of California Water Agencies.

This includes many small municipal water districts with limited supplies, such as the wine-growing communities of Cloverdale and Healdsburg in Sonoma County, where the restrictions include no daytime outdoor irrigation and no car washing except at facilities that recycle water. 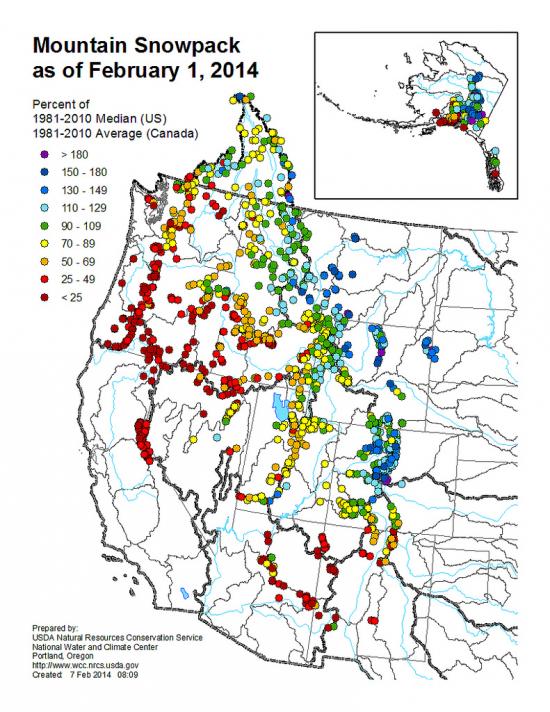 Some mid-sized and large water agencies also have called for mandatory cuts. Silicon Valley’s Santa Clara Valley Water District, for example, whose territory includes tech giants such as Apple, Google, Facebook, Intel, Yahoo and others, passed mandatory measures in late February as its local reservoirs trickled toward 30 percent capacity. The water district, a wholesale supplier, is relying on the local agencies and municipal retailers it serves to implement the mandate.

The Los Angeles Department of Water and Power has had water restrictions in place since 2009. Among the measures is a ban on landscape irrigation four days a week. Like many water utilities around the state, LADWP gives away free items such as water-efficient showerheads and faucet aerators, and also offers rebates for conservation measures such as installing rain barrels to capture storm water and replacing water-intensive lawns with “California-friendly” landscapes, such as succulent and cactus gardens.

Whether large or small, private or public, California’s water utilities this week are leveraging the drought to promote the Environmental Protection Agency’s Fix a Leak Week, which comes in advance of World Water Day on Saturday.

How big of a problem are leaks?

According to the EPA, household leaks alone can waste more than 1 trillion gallons of water a year nationwide. On top of this, America’s aging water supply infrastructure is so porous that 6 billion gallons of treated water spill each day, finds a recent report.

Given these leaks and other egregious examples of water waste, it shouldn’t be surprising that America’s per-capita water footprint is twice the global average and higher than any other industrialized nation.

But the water crisis, for all of its dangers, may be a well of opportunity as deep as the challenge itself — as many policymakers, investors, utilities, smart-water technology developers and corporate sustainability executives are discovering. 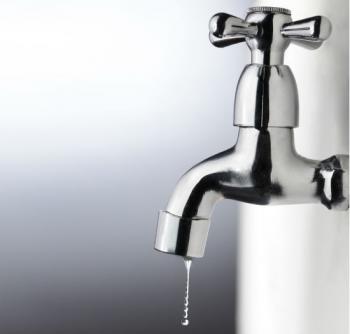 “California water policy moves in fits and starts tied to floods and droughts,” said Janelle Beland, an undersecretary in the California Natural Resources Agency, in congressional testimony at a field hearing this week in Fresno.

“When the rain and snow falls steadily and predictably, Californians tend to assume it will always be there. It’s human nature,” said Beland. “We intend to take full advantage of the public’s hyper-focus on water issues this year to advance improvements to our water system.”

San Francisco-based startup WaterSmart Software is also taking full advantage. The company — which offers utilities a “home water report” platform to educate their customers on ways to reduce their household water use — is seeing its business blossom as a result of Western water scarcity.

“It’s been very positive, though it’s obviously not positive that there is a drought,” Jeff Lipton, WaterSmart’s director of marketing, told GreenBiz. “There’s a lot of demand for our services and our technology,” which can also detect leaks, he added.

To date, the company has announced deals with 15 utilities in California, Colorado, Texas and Utah. Most of these are close to home, where, for example, the East Bay Municipal Utility District (EBMUD) last month agreed to a three-year deal with WaterSmart following a successful 10,000 home pilot project supported by a state grant.

“We are finding that WaterSmart is effective,” said EBMUD spokeswoman Andrea Pook, pointing to per-customer water savings of 5 percent on average achieved during the test phase. The utility plans to roll out WaterSmart’s platform with 25,000 to 50,000 customers this year, growing to 100,000 customers by the third year of the agreement.

EBMUD expects the program to cost about $8 to $10 per customer per year, based on projected participation.

“Conservation is a relatively inexpensive supply of water; cheaper and environmentally better than building a new dam or other big investments,” said Pook. “We are always looking for the next thing that is going to save more."

But EBMUD is exploring potential long-term infrastructure investments as well. 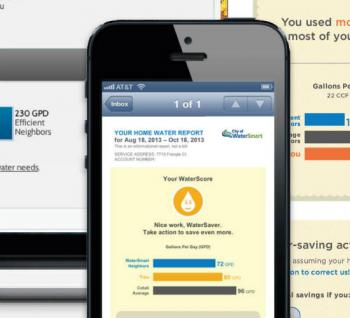 The Bay Area Regional Desalination Project is a collaboration of the five largest water agencies in the region — EBMUD, the Contra Costa Water District, the San Francisco Public Utilities Commission and the Santa Clara Valley Water District. Still in the early phases of development, the desalination plant would remove salt from ocean or brackish water to produce fresh drinking water, diversifying the Bay Area’s supply.

An example of what such a project could look like is under construction in Carlsbad, north of San Diego, where IDE Technologies has teamed up with the San Diego County Water Authority, NRG Energy and Poseidon Water to build a $1 billion desalination plant touted as the largest in the Western Hemisphere.

The project, which relies on reverse-osmosis technology, will connect to San Diego County Water Authority’s aqueduct via a 10-mile pipeline and deliver up to 56,000 acre-feet a year to the region. That’s sufficient to meet the needs of about 112,000 typical single-family homes.

The public-private partnership — which could become a model for the Bay Area’s desalination project and other large-scale water projects in the state — is relying on the sale of $734 million in tax-exempt bonds issued by the California Pollution Control Financing Authority, underwriting from JP Morgan and equity from Stonepeak Infrastructure Partners.

Meanwhile, startup WaterFX seeks to scale up solar-thermal powered desalination, starting with the nation's only such plant, operating in the Central Valley.

But whether it’s a question of big investments such as these, or small-scale efficiency and conservation initiatives, the drought conditions persisting across California and the entire Western U.S. bring much-needed attention to the decisions that will affect the resiliency of our water supply — and to the important role that we all have to play.