Nitin Gupta has a penchant for garbage. The mission of his startup company, Attero, is to recycle old computers, cellular phones and other used electronics in a state-of-the-art industrial facility about 100 miles from New Delhi. Nearly a third of Attero's source materials come from informal collectors who earn their living by finding and selling e-scrap, Gupta says. Attero pays them slightly more for used computer circuit boards than they would make from extracting gold from the boards by drenching them in cyanide — a largely unregulated process that poses risks to soils, water and human health.

"They're getting more money ... and also they don't have to go through the process" of dismantling the circuit boards in a haze of lead and cyanide fumes, says Gupta, 34, who co-founded Attero with his brother Rohan in 2008. The facility now reprocesses roughly 1 percent of the printed circuit boards generated in India, according to Gupta, and it uses 77 percent less energy to extract copper from the boards than virgin mining would require.

For two decades the global narrative around electronic waste has typically been that rich, industrialized countries were dumping used devices onto impoverished ones, where the desperately poor often recycled printed circuit boards under unsafe conditions. But experts say nascent e-waste trends are beginning to challenge that paradigm. Developing countries are now shipping more e-waste by weight to developed countries than vice versa, according to a recent analysis of United Nations trade data by Josh Lepawsky, a geographer at Canada's Memorial University of Newfoundland and an expert on the electronic waste trade. "Between 1996 and 2012 the dominant inter-regional trade pattern has been turned on its head," he says. 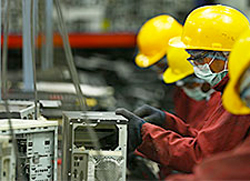 Meanwhile, a small but growing number of businesses such as Gupta's, often backed by international donors and lenders, are exploring ways to create incentives for informal collectors to sell e-waste to formal recycling operations. For example, the German government's development aid agency, the German Society for International Cooperation, has supported an Indian company named e-WaRDD that has piloted a project to incentivize circuit-board collection in Bangalore, India. And a Belgium-based nonprofit, WorldLoop, receives corporate funding to support a range of electronics recycling programs in Africa that link informal recyclers with state-of-the-art facilities overseas that recycle printed circuit boards, transformers and leaded glass.

Researchers say printed circuit boards, which often contain gold and other valuable metals, are a good first step for such projects because they typically represent the most valuable — as well as the most environmentally hazardous — aspect of the e-waste recycling process. The goal is to allow collectors to continue their practice of re-using or manually dismantling electronic equipment, but then sell those parts to professional facilities instead of melting them or using cyanide to extract valuable metals in backyard workshops. Advanced recycling facilities employ commodity separation, shredding, resource recovery and pollution-control technologies that greatly reduce the health and environmental hazards associated with backyard recycling operations.

Fledgling e-waste programs and businesses offer early lessons about what may help move the informal recycling sector toward more sustainable practices, according to researchers. But they also highlight the complexities of the global e-waste market, where it can often be more profitable for backyard recyclers to continue their ad-hoc operations than sell to large-scale e-waste processors or middlemen, sometimes called "interface" outfits.

"As far as I know, there has been plenty of legislative action to ban trade and informal recycling," but insufficient action to develop alternate approaches, says Eric Williams, a professor at the Rochester Institute of Technology who led a recent study that examined how to more effectively link informal and formal e-waste recyclers.

As e-waste flows shift, manufacturers in China, India and many other low- and middle-income countries increasingly view e-scrap as a valuable commodity — both for extracting metals or for manufacturing new devices from a product's component parts. That is partly because the value of e-waste broadly has increased in recent years in tandem with rising demand for the so-called rare earth elements used in laptops, cellular phones and other electronic devices.

Policies that encourage sustainable "harvesting" of e-waste resources already exist in Singapore, Taiwan and South Korea, says Michael Biddle, president of the California-based plastics recycler MBA Polymers, which has a facility in China. "They're doing it not just to protect their environment," he adds. "They also recognize, 'Hey, these are resources we need to remain viable as a manufacturing base.'" 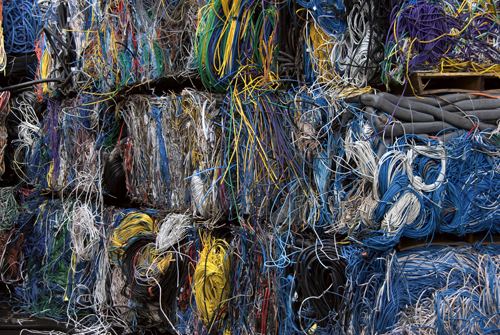 E-waste experts say, however, that any effort to connect the formal and informal sectors faces major challenges. One is finding incentives to ensure safe treatment not only of lucrative components such as circuit boards, but also of less valuable and potentially hazardous materials. Ramzy Kahhat, a professor of engineering at the Pontifical Catholic University of Peru, says the question for any scrap middleman becomes: "Do you want to cherry pick and take only the good stuff and leave the bad things? Or are you willing to handle the whole product?"

In China, officials are working to clean up the environmentally harmful aspects of a booming domestic e-waste trade, according to Feng Wang, a research associate at the United Nations University in Germany who has studied the issue of linking formal and informal e-waste recyclers. According to Wang, China's measures include an ongoing drive to build a network of facilities that can process circuit boards and other hazardous e-waste components according to international best practices; regulations that require electronics producers to pay recycling fees; and a 2013 initiative to tighten inspections policies for e-waste shipped into Chinese ports.

Wang says that Chinese consumers are generating vast amounts of e-waste, and a key challenge is how to deter hazardous practices in the informal sector by setting up electronics "take back" and recycling systems that can compete with a thriving informal trade. He says Guiyu — southern China's notorious e-waste zone where the burning of circuit boards and other hazardous materials has contaminated soils, rivers and water with toxic heavy metals — has been significantly cleaned up in recent years. Still, countless informal scrap collectors operate across China, drawn by the value in electronic waste, no matter how toxic. (According to the United Nations University (PDF), a 2007 study by researchers at the Swiss Federal Laboratories for Materials Science and Technology estimated that 440,000 people in China were involved in informal e-waste collection and reprocessing. But Wang cautions that the estimate is "very rough.")

Over the years, numerous initiatives have attempted, with mixed results, to create laws and international agreements to help mitigate the e-waste trade's negative environmental and health effects. The best known is the 1992 Basel Convention, which imposed a patchwork of restrictions on which electronic products some rich countries could ship to poorer ones.

Since then, the amount of e-waste generated globally has increased: A 2013 study by the group Solving the E-Waste Problem (StEP) Initiative forecasted that the amount of e-waste produced globally may rise by a third in the next five years, from nearly 49 million metric tons to 64.5 million tons. However, a few e-waste experts say the Basel Convention and related debates no longer reflect the shifting geographies of the global e-waste market. And in a forthcoming study, geographer Josh Lepawsky notes that while Indonesia was a net importer of e-waste in 1996, it is now a net exporter whose top three export destinations are China, South Korea and Hong Kong.

Electronics are still sent abroad by the United States and other developed countries. But researchers say the material is often critical for technology infrastructure in developing countries, and that much of the e-waste crossing the globe is actually destined for repair and reuse rather than immediate recycling.

A study (PDF) last year by the United States Trade Commission found that most used electronic devices exported from the United States are refurbished and resold and that "only a small share" of all exports were sent for disposal. Jim Lynch, a recycling expert at TechSoup Global, a U.S.-based nonprofit, says adding extra life to computers saves between five and 20 times more energy than recycling them outright. Preserving a computer's lifespan is important because the average desktop requires 530 pounds of fossil fuels, 50 pounds of chemicals and 400 gallons of water to manufacture, according to Lynch.

"A big part of the story that's rarely, if ever, talked about is keeping these materials in circulation that have already come out of the ground," says Lepawsky. Environmental and health concerns about informal e-waste recycling are "absolutely legitimate," he adds, but they should be evaluated alongside the need to cut down on resource extraction.

Fledgling recycling companies in the developing world often purchase printed circuit boards from informal scrap collectors and either reprocess them in a nearby modern facility or ship them to one in a more developed country such as Germany. In India, Attero recycles circuit boards in its own 100,000-square-foot facility. One of the company's principal backers, the International Finance Corporation — the private-sector arm of the World Bank — says Attero is India's only "end-to-end" e-waste recycler and could inspire other projects across the country. But forging sustainable links between India's formal and informal recycling sectors may be a long-term project: A January study in the Journal of Environmental Protection said only 3 percent of India's e-waste stream is processed formally and that an estimated 25,000 people handle 50,000 tons of hazardous e-waste each year in Delhi alone as part of the informal recycling trade.

Peru Recicla, a Peruvian company, buys circuit boards from informal collectors and ships them to a state-of-the-art facility in Germany. In 2008, the company exported about 50 tons of shredded circuit boards to Hamburg, and company officials say that about half of a typical export shipment is purchased from informal recyclers. Peru Recicla is a promising example of an entity linking informal and formal circuit board recyclers, according to researchers, but a lingering challenge is how to expand the scope of such businesses to include plastics and other less valuable e-waste components.

E-waste experts say that attempts at reform should begin with the recognition that informal e-scrap collectors are good at what they do — finding value in waste — and should be an integral part of any environmental solution. "Even though there is evidence of environmental problems related to recycling of e-waste, I think there are some activities in this system that are positive," says Kahhat. "Instead of saying, 'OK, I'll put a stop on everything,' try to understand what activities are positive and do not harm the environment, and give creative solutions for those activities that are harming the environment."

Seeking An International Solution to Mountains of E-Waste

High-Tech Toxic Trash From USA Found to be Flooding Asia

The Promise and Pitfalls of E-Waste Takeback