As communities across America continue to experience increasing climate impacts in the form of rising seas, heat waves and extreme weather, local and federal leaders are starting to roll up their sleeves.

Last week, the White House unveiled the Climate Data Initiative, a project aimed at arming local leaders across the country with information they need to plan for climate impacts while building more resilience. The initiative provides a key tool for helping those at the frontlines of climate change — America’s local communities.

The Climate Data Initiative delivers on a key element of President Obama’s Climate Action Plan, announced in June. This new initiative creates an online hub of government data on climate impacts, giving local communities a detailed look at how a warmer world may affect critical infrastructure such as their bridges, roads and canals.

The initial phase will focus on providing data and tools related to sea level rise and coastal flooding, and later phases will include information addressing other climate-related impacts. This release of comprehensive government data will be supported by additional efforts from the philanthropic and private sectors. Google, for example, has committed to donate significant cloud computing and storage and to work with partners to create a near real-time system to monitor drought throughout the continental United States. Intel, Microsoft and Esri will create various maps, apps and other tools and programs to help local officials and other stakeholders understand the climate risks specific to their communities.

Local communities on the front lines of climate change

The initiative could be an important step in preparing the country for the impacts of climate change. From coastal towns in Southeast Florida to the world’s largest naval base in Hampton Roads, Va., local communities are increasingly vulnerable to sea level rise and other dangerous effects of climate change.

Indeed, climate change is already affecting virtually every community throughout the country — and these effects are poised to worsen with every degree of warming. Consider the following:

• Scientists have found that the conditions leading to the 2011 Texas drought are 20 times (PDF) more likely to occur now than in the 1960s due to human-induced climate change.

• Sea level rise has given a springboard for storm surge and coastal flooding that has amplified the impact of coastal storms, such as Hurricane Sandy. Today’s annual probability of a Sandy-level flood reoccurrence nearly has doubled compared to 1950.

• The Western United States experiences seven times (PDF) more large-scale wildfires than it did in the 1970s.

• Extreme precipitation events have increased in every region (PDF) of the United States between 1958 and 2007. 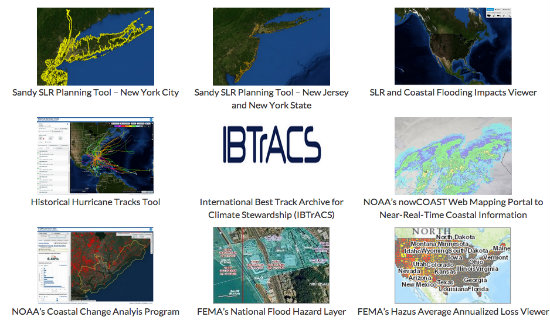 Escalating climate impacts not only threaten human well-being, they’re causing costly damages to critical infrastructure — damages expected to worsen in a warmer world with more frequent and intense extreme weather (PDF). Severe weather is already the single-leading cause of power outages in the country, causing an estimated 679 widespread power outages between 2003 and 2012 and costing the economy, businesses, school systems and emergency agencies billions of dollars. Urban infrastructure is especially vulnerable to the impacts of climate change. A 2007 extreme precipitation event in New York City, for example, only lasted two hours, but caused a system of transit failures that stranded 2.5 million riders (PDF). And in Miami Beach, officials say it will cost as much as $400 million to prepare the city’s drainage system for sea level rise-induced flooding and storm surge.

The role of open data in climate resilience

While climate change will affect all communities throughout the United States, the type of impacts felt will vary at the regional, county and even city levels. Communities cannot adapt to or mitigate these impacts without first understanding exactly how they will be affected. Open data such as that provided in the Climate Data Initiative can help provide this level of information. For instance, the climate data site will offer infrastructure and geographic mapping data sets — showing specific bridges, roads and canals — and help local decision-makers understand how this infrastructure might be affected by things such as sea level rise, drought or extreme weather. Local governments can use this current and relevant data as a basis for developing effective plans and using resources.

The Climate Data Initiative builds on other work that connects federal activities with local climate action, including a Presidential Task Force on Climate Preparedness and Resilience and the recent budget request for a $1 billion fund (PDF) for climate resiliency. This latest initiative by the administration not only reinforces the president’s acknowledgement that climate change is occurring, but also his prioritization of empowering local governments to address the issue.

Helping localities throughout the nation become more resilient is an incredibly important piece in overcoming the climate challenge. But, as organizers of this initiative acknowledge, adaptation and resiliency strategies will need to be accompanied by comprehensive reductions in annual greenhouse gas emissions at the national and international levels. Adaptation combined with comprehensive mitigation action is the only way to ensure a sustainable future — both locally and globally.

Why resilience is essential in a volatile world