In late February, the Fossil Free NYC forum, co-sponsored by the Responsible Endowments Alliance, GreenFaith and NYC Grassroots Alliance, kicked off a campaign to get the city's five municipal pension funds to divest any holdings in the top 200 publicly held companies that own most of the fossil fuel reserves still in the ground. Included in the top 10 are ExxonMobil, BP, Gazprom, Chevron and Royal Dutch Shell. No. 1 on the list is Russian company Severstal, which owns about 141 gigatons of CO2 in the form of coal reserves.

From 2010 until 2050, scientists say we must avoid a rise of more than 2 degrees Celsius in temperature to prevent catastrophic and irreversible climate change. According to the Carbon Tracker report "Unburnable Carbon" (PDF), this means the world cannot burn more than about 565 gigatons during the same time frame. Known fossil fuel reserves held by the top 200 companies currently total 745 gigatons, so about 180 gigatons could be considered "unburnable," the report states.

These reserves likely will become stranded assets as the consequences of climate change translate into government policy and corporate planning to restrict the use of fossil fuels. As Linnea Paton, state campaign coordinator for Students for a Just and Stable Future, noted at the forum, "Any company based on burning fossil fuels is overvalued."

There are indications that the administration of New York mayor Bill de Blasio intends to continue the previous administration's commitment to tackle climate change by addressing this issue. The newly elected New York City comptroller, Scott Stringer, spoke at the recent 2014 Investor Summit on Climate Risk at the U.N. about creating a carbon market in New York, much as California has done.

He also mentioned that climate change poses a substantial risk to the financial stability of the city's pension funds. "As fiduciaries, we have no choice but to act" to reduce climate risk, he said. While Stringer still has not committed to supporting divestment of fossil fuel assets in those funds, divestment activists hope his remarks at the U.N. signal receptivity to their aims in the new administration. As a first step, they intend to push the point with a non-binding resolution by the city council.

In a draft version of this resolution unveiled at the forum, activists ask the city to divest in light of specific concerns New York City already has expressed. This includes the development of the city's PlaNYC, last updated in 2011, which sets a city-wide goal of reducing carbon dioxide emissions by 80 percent by 2050, as well as a 2010 finding by the Bloomberg administration that New York City "is already experiencing a number of climate risks as a result of global warming, including heat waves, sea level rise and storm surge, and droughts and floods."

Were New York City to divest its four pension funds of fossil fuel holdings, it would be a major turning point for the divestment movement. For one, it would be by far the largest municipal pension system to divest; the largest so far to pass such a vote is San Francisco, with $16 billion in assets to New York City's $147 billion.

Nathan Schumer, city council liaison for the NYC affiliate of the climate organization 350.org, told forum attendees that if the city voted to divest its pension funds of fossil fuel holdings, it would "make it much more difficult to fund fossil fuel projects both worldwide and in the U.S." Presumably, the position of New York City as a global financial center would send a robust message to investors.

Some energy industry analysts warn that high profits in the "extreme energy" sectors (deep water oil, tar sands, shale oil and gas hydro-fracking) are illusory and likely to be short-lived. Richard Heinberg of the Post Carbon Institute examined records of the hydrofracking oil and gas industry and concluded that there is an unsustainable bubble in drilling that will crash by 2020. The divestment movement hopes to help prick that bubble by making it more expensive to borrow money for extreme energy projects.

One issue confronting the movement is the limited power of a purely negative message. At the Fossil Free NYC forum, NYU sustainability professor Lisa di Caprio argued persuasively for matching divestment with "re-investment" in renewables and energy efficiency. She said divestment advocates need to stress to institutional investors that fossil fuels are the investments of the past, while clean energy and other investments that decrease climate risk are the "investments of the future." Di Caprio cited figures showing that socially responsible investments tend to have a 25 percent higher stock value than less sustainable investments.

A growing universe of clean investments is available to pension funds that wish to divest — and strengthen the long-term stability of their portfolios. Such investment is sorely needed. The IEA has estimated that the world needs to invest $1 trillion per year over the next 36 years to replace fossil fuels and avoid exceeding 2 degrees Celsius of warming — a four-fold increase over current investment levels. CERES recently published a report, "Investing in the Clean Trillion," with 10 recommendations for investors, companies and policy-makers to help this vision become a reality. 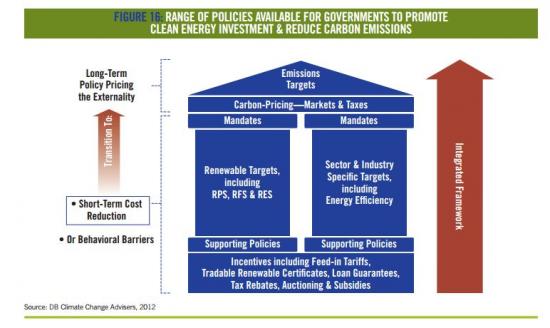 Some in the divestment movement already are matching their demands for getting out of fossil fuels with encouragement for investors to get into clean energy investments instead. Should this trend grow, it could provide a tasty carrot to institutional investors to do the right thing. Meanwhile, the stick of climate change risk could be what drives them to divest in the first place.

Why New York City is divesting from fossil fuels