Have we reached the clean energy tipping point?

Have we reached the clean energy tipping point?

You've heard the statistic: The world installed more new solar generating capacity than wind for the first time in 2013, 36.5 gigawatts (GW) of solar versus 35.5 GW of wind.

While massive utility-scale projects played a major role, the rise of distributed generation capabilities made possible by residential and commercial installations is what put solar over the top, reports clean tech research firm Clean Edge in "Clean Energy Trends 2014." That momentum likely will continue over the next decade, as forward-thinking businesses, cities and utilities seek to minimize their dependence on fossil fuels.

"As we pointed out in the report, for the foreseeable future most new energy deployed in the European Union will be distributed generation, and that's starting to happen in Japan, the United States and elsewhere," said Ron Pernick, co-founder and managing director of Clean Edge. "This overall trend, combined with decreasing costs to install solar and the decline in wind installations, saw the crossover between solar and wind occurring for the first time in 2013."

What's in store for clean energy

From an overall perspective, there is still at least twice as much wind generating capacity as solar globally.

But the expensive economics of wind along with a lack of long-term policy leadership in many countries are forcing businesses and utilities to think differently about their renewable energy investments, boosting investments in solar and biofuels as a result.

If existing trends continue, the solar-wind crossover could happen by 2021 with global cumulative solar photovoltaic (PV) capacity reaching about 715.8 GW, compared with an anticipated 697.3 GW for wind, according to Clean Edge's analysis. This assumes solar costs will decrease from about $2.50 per watt installed, which is less than one-third of the expense from 10 years ago, to about $1.21 per watt by 2023.

During the same time frame, Clean Edge predicts that global markets for ethanol and biodiesel will rise an average of 4.5 percent annually, reaching $145.6 billion in 2023. The researcher predicts "modest growth" for wind power, with the industry expanding to $93.8 billion in 2023.

One wild card in the ongoing progress of clean power adoption will be policies and regulations, as certain legacy utilities seek approval of new fees and other charges to help make up the revenue lost through distributed generation. Far more interesting to watch are the forward-thinking ones that view this as a business opportunity. Here are five developments worth our attention, according to Clean Edge:

1. Edison International's acquisition of SoCore Energy — The latter is the Chicago-based solar developer that has helped companies including IKEA and Walgreens plan and deploy their onsite solar installations.

3. Investors in Clean Power Finance — So far, Edison, Duke Energy and two other unnamed utilities have put money into the web services company, which focuses on helping finance residential solar.

And let's not forget another emerging technology that will be a factor in new utility models: intelligent energy storage, being pioneered by the likes of SolarCity and Tesla; NRG Energy, which is betting heavily on distributed generation supplemented by big batteries; and Stem, which has investors that include GE Ventures and Spain's Iberdola. 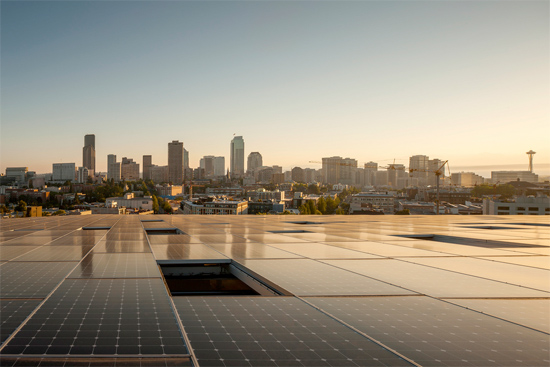 Another factor accelerating clean power investments over the next decade will be a heightened focus on net-zero energy buildings that generate at least as much power as they need to operate — and maybe then some.

In 2003, fewer than 50 buildings worldwide held a green rating as designated under the Leadership in Energy & Environmental Design (LEED) standard created by the U.S. Green Building Council. By the end of last year, 4,617 of them held that distinction, a 8.6 percent increase over 2012.

That is a great foundation, but now many organizations look beyond LEED to net-zero operational status, as designated by frameworks such as the Living Building Challenge. One of the most prominent examples is the Bullitt Center in Seattle, powered by a solar array. If tenants use more than their allotment, they are charged for overages.

New policy mandates virtually guarantee that net-zero will become far more prevalent, which will provide another boost to renewable energy technologies, including commercial solar, battery storage and small wind. In the European Union, for example, all new public buildings must achieve "nearly zero" status by 2018. In California, the Title 24 building code mandate requires net-zero status for all new residential construction by 2020 and all new commercial buildings by 2030.

"Although skeptics may contend that examples of net-zero buildings are isolated," Clean Edge predicts, "that will change dramatically in coming years." 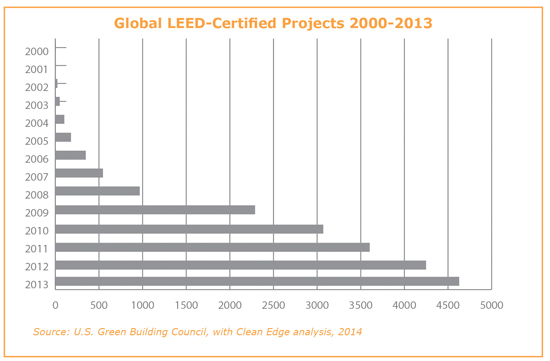 GreenBiz 101: The slow but steady march toward Grid 2.0

Utilities and small solar: Learn to love it