Successful sustainability initiatives depend on strong laws, oversight and guidelines, and leaders in the business world can make a big difference by fighting for policies that protect the environment. From chemicals to the controversial XL pipeline, here are three pro-sustainable business policy items the American Sustainable Business Council is working on in conjunction with many other organizations — and information on how you can join the cause.

1. The push for stronger chemical regulations

The good news: Congress is moving forward on comprehensive chemicals reform. The bad news: The bill introduced in the House is inadequate.

Barry Cik, co-founder of the non-toxic baby goods company Naturepedic, said while testifying at a hearing on the bill that it fails to address a number of areas such as innovation, transparency and safety. "The bill falls short on each of these principles," he said. "On transparency issues, CICA [the Chemicals in Commerce Act] codifies the rules that allow chemical manufactures to hide a broad amount of data with little or no justification for doing so."

Cik added, "The public is increasingly becoming educated about the risks of consumer products containing untested toxic chemicals. Consumers deserve access to transparent information and full disclosure regarding the products that they buy."

Responsible business owners need to put pressure on Congress to ensure that good legislation is created and passed. Chemical industry lobbyists are pushing hard for regulations that will continue the status quo, which currently ties the government's hands and allows some 62,000 chemicals to go effectively unregulated.

Sign the Companies for Safer Chemicals petition, read up on the business concerns (PDF) about chemicals regulations reform and read polling results that reveal the opinions of small business owners on toxic chemicals.

2. Clean energy victory bonds are a victory for small business

Reliable, long-term financing has been one of the greatest obstacles to moving the nation toward a clean energy future. Clean Energy Victory Bonds (CEVBs) can be a big part of the solution.

The Clean Energy Victory Bonds Act of 2014 would create an investment vehicle that allows Americans to invest in one of the fastest growing sectors in the global economy. It would enable all Americans to invest in Treasury Bonds for as little as $25 each to fund a clean energy future. Backed by the full faith and credit of the U.S. Government, these CEVBs would offer investors a risk-free investment vehicle with a return equal to or greater than the market rates on U.S. Treasury Bonds, without raising taxes on any individuals or businesses.

The $50 billion raised from the bonds will fund clean energy programs that support wind, solar, energy efficiency and electric vehicles in the United States. Supporting these industries is important from an investment standpoint and a business standpoint. Many of these industries are made up of small- and medium-sized businesses or startups, and the money created through CEVB investments will be crucial to their growth and development.

By producing and securing a domestically sourced energy supply, the U.S. also can insulate consumers and businesses from the uncertainty and price fluctuations associated with procuring fossil fuels in unstable global markets. In addition to the economic benefits, the environmental and health benefits of reducing the pollution associated with the burning of fossil fuels will greatly reduce health care costs and alleviate the productivity losses associated with these pollution-related health conditions.

Sign on to support Clean Energy Victory Bonds and learn more about the issue.

3. Say it loud: The XL pipeline would be bad for business

In his June climate address, President Obama said that allowing the Keystone XL pipeline to be built "requires a finding that doing so would be in our nation's interest. And our national interest will be served only if this project does not significantly exacerbate the problem of carbon pollution."

Unfortunately, answering the question of how much the pipeline might increase carbon pollution has proven difficult. When the State Department released its Final Impact Statement on Keystone at the end of January, it concluded that the pipeline "would contribute to cumulative global [greenhouse gas] emissions." But it also argued that blocking the pipeline would not prevent the oil from being produced and transported elsewhere, implying that the pollution would occur either way.

As politicians and pundits debate the issue, climate change continues to become a bigger problem. But business voices carry a lot of weight in the fight. Fossil fuel suppliers and their lobbyists are making their case. Sustainable and responsible businesses need to make theirs. 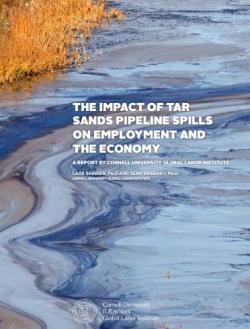 For example, instead of the pipeline, we should be investing in less carbon-intensive energy sources. A March 2012 study from Cornell University, "The Impact of Tar Sands Pipeline Spills on Employment and the Economy" (PDF), found that an equal investment in clean energy generates three to four times as many jobs as investments in fossil fuels, without risking potential environmental hazards such as oil spills.

Renewable energy sources such as solar are among the fastest-growing sectors of the energy industry, creating tens of thousands of jobs. Investing in dirty fuel such as tar sands will slow that trend, also slowing the efforts to slow and reverse climate change.

Sign the business petition against Keystone XL, learn more about how the pipeline would be bad for business and see how few jobs Keystone XL is actually expected to create.

Can Victory Bonds open a new front for clean energy?