Walmart, California and beyond: The 411 on safer chemical rules

Walmart, California and beyond: The 411 on safer chemical rules

Beyond these initial three, here's what companies need to know about the broader implications of regulations in California and beyond.

Wake up call: Time to get ahead of regulations

California-compliant alternatives analyses require significant research, reporting and disclosure of information to the public, and may result in a regulatory response. The California regulations do, however, provide companies with a lengthy period to switch to alternatives, reduce exposure from their product or make the case for continued use of the chemical of concern. Roughly 24 months separate the final listing of a Priority Product in rulemaking (about March 2015) and a regulatory response by the state (about March 2017).

Most companies are likely to find it preferable to eliminate the chemical of concern in a Priority Product before the official listing in rulemaking by California in March 2015. In doing so, companies will avoid performing complicated alternatives analyses and can select any alternative they want. However, given the trend against chemicals of high concern to human health or the environment, companies should select a safer alternative. 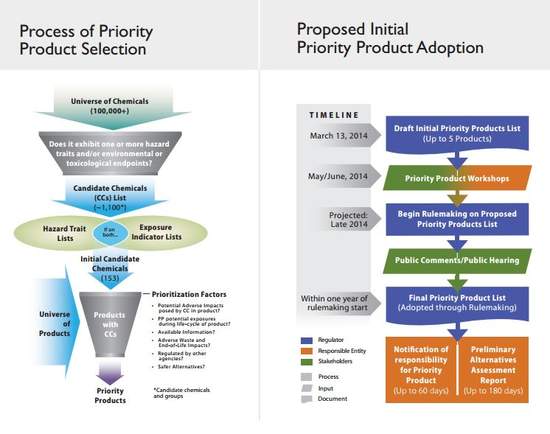 Got chemicals of high concern?

The initial three Priority Products are a call to all companies: If you are not paying attention to chemicals of high concern, now is the time. Companies are approaching such chemicals in tiers.

First, start with a small number of manageable chemicals. Walmart (PDF), for example, prioritizes 10 "High Priority Chemicals" (which have not been publicly released).

For the broadest compilation of "lists of lists" and a related chemical database, see the Chemical & Material Library at the Healthy Building Network's Pharos Project.

In substituting a chemical of concern, such as methylene chloride in paint strippers, manufacturers at a minimum should select an alternative that is not on the California Candidate Chemicals List or a similar list to avoid future regulatory action. But relying only on lists of high-concern chemicals can lead to regrettable substitutions — using an alternative that is equally or more hazardous to the eliminated chemical. 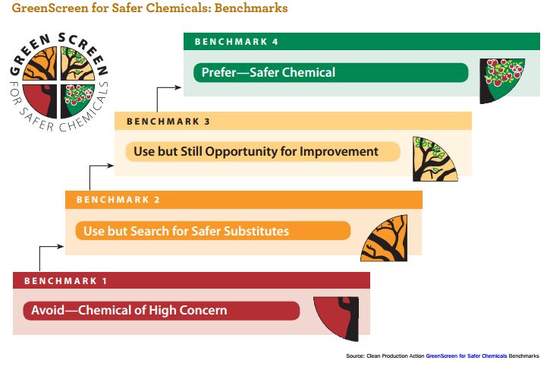 Nike, meanwhile, increasingly prefers suppliers that use formulations based on its Green Chemistry Program. And Walmart recommends that companies perform alternatives assessments that align with the Commons Principles for Alternatives Assessment.

The broader implications of regulations

In the bigger picture, the California program is the most recent indicator of a momentous shift underway in the marketplace away from chemicals of high concern. California joins Washington state, Maine, Minnesota, the European Union and major retailers including Target, Walmart and, just last week, Bed Bath and Beyond in targeting the reduction of hazardous chemicals in products.

• Consumers and retailers want products made with inherently safer chemicals.

• Toxic chemicals in products are a growing liability for brands. Brands can choose to wait for government regulation or market demands, or can get out ahead of these regulations and replace chemicals of high concern with safer alternatives.

• The scope of products categories under concern is growing. Children's products, personal care and beauty care products are all under scrutiny from consumers, retailers and state governments. By including spray foams and paint strippers, California adds a new category of products to state regulation: building products.

The California initiative is unique in that it drives companies to identify safer alternatives to the chemicals of concern. Learn more about how to reduce your company's chemical footprint through the BizNGO Guide to Safer Chemicals.

Science photo by fotohunter via Shutterstock

Ready for chemical alternatives assessment? The IC2 can help

Don't Know Your Company's Toxic Footprint? Ignorance Will Not Be Bliss

How to comply with California's new safer product regulations