Some of the Internet's biggest names are making impressive strides to reduce the carbon footprint of the cloud, says Greenpeace. Yet as the world's appetite for data expands, Twitter and Amazon Web Services are bringing up the rear.

That's according to the Greenpeace report, "Clicking clean: How companies are creating the green Internet," released Wednesday.

"In terms of doing it at scale, Apple, Facebook and Google are really writing the playbook right now," said David Pomerantz, spokesman for Greenpeace's energy campaign.

For this spotlight of 19 cloud-computing corporations — both household names and lesser-known brands — Greenpeace considered more than 300 data centers. The report describes the mix of energy sources — including renewables, natural gas, coal and nuclear — used by each company.

It also assigns a letter grade for four factors: energy transparency; renewable energy commitment and siting; energy efficiency and mitigation; and the deployment and advocacy of renewables. Apple and Facebook each received three "A" grades, with an "A-minus" average. Google had three "Bs" and one "A." (Scroll to the end for the full, alphabetical-order list.)

Greenpeace lauds Apple in particular for innovation and "aggressive" progress since the activist group's 2012 report on "How clean is your cloud?" Apple is now the largest private owner of solar facilities in the United States.

"Apple is proud to lead the industry by powering our data centers with 100 percent renewable energy for more than a year now," said spokesman Chris Gaither. "We've built the country's largest private solar array and fuel cell installations at our site in North Carolina, and innovative clean energy projects are in the works for our data centers in Nevada and Oregon."

Greenpeace names efforts by Facebook, which has a 25-percent renewables goal by 2015 and is investing in massive Iowa wind farms. Google, which collaborates with utilities, is 34 percent powered by cleaner energy. 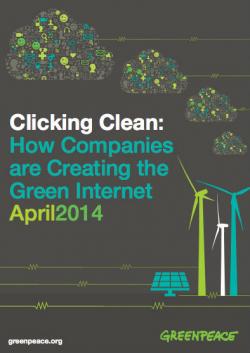 However, the report says, "Other Internet companies have refused to pay even lip service to sustainability, and are simply buying dirty energy straight from the grid."

Named and shamed are Twitter, which counts 241 million users, and Amazon Web Services. Twitter is trailing in part for declining to disclose how its data centers are powered, Pomerantz said. The social network rents data center capacity. However, so does Salesforce, which has committed to 100 percent renewables (as have Apple, Box, Facebook, Google and Rackspace).

Amazon Web Services powers Netflix and the fast-growing social networks Pinterest, Spotify, Airbnb and Vine. "It’s great if Amazon has efficient data centers, but if the bulk are in Northern Virginia and powered by coal and gas and nuclear energy, it's not doing anyone any favors," Pomerantz said.

Netflix and Google's YouTube alone account for more than half of peak-time Internet traffic, according to network company Sandvine. The rise in streaming movies and music as well as social media is driving overall Internet activity, which is expected to triple by 2017 from 2012 levels. If the Internet were a nation, it would be the sixth largest in the world terms of its energy hunger — behind China, the United States, Japan, India and Russia.

Melissa Gray, director of corporate social responsibility at Rackspace, called the ratings tough but fair. She said she appreciated the feedback about points for improvement that are on the company's roadmap, such as providing disclosure to the CDP. Rackspace says it is 35-percent powered by renewable energy overall, and 100 percent in the United Kingdom.

What big challenge lies ahead for Rackspace? “How do we learn from the shoulders of the giants we stand on — Facebook and Google — to create a reliable, affordable energy infrastructure that not only benefits our customers and our shareholders, but also the people that live in the communities where we operate?” Gray said.

Near the middle of the pack, Yahoo had an average "B-minus" grade. Microsoft achieved a middling "C" and Rackspace held a "C-plus," but were recognized for their growing efforts.

“We welcome Greenpeace’s report and embrace the opportunity and challenge of transitioning our cloud services to clean energy," said Rob Bernard, chief environmental strategist at Microsoft. The company has doubled its purchase of renewables to 2.3 billion kilowatt hours in the past year. In November it announced a Texas purchase of 110 megawatts of wind power. And in March, Microsoft and Facebook together urged Iowa lawmakers to support distributed energy.

Companies receiving a "D" in the Greenpeace report include Oracle and colocation company Digital Reality.

It's critical for companies providing the Internet's backbone to move beyond energy efficiency and replace dirty sources of energy to power their data centers, the 77-page report maintains.

Amazon Web Services contends that its efficient data centers in 10 regions eliminate hundreds of thousands of less efficient ones. In addition, two of those regions use fully "carbon-free power."

The company released a statement saying: "We agree with Greenpeace that technology leaders should help safeguard the environment by implementing both efficient use and clean sources of energy." It charged that Greenpeace "misses the mark" by using "false assumptions" and "inaccurate data."

The Greenpeace report called out members of ALEC, the American Legislative Exchange Council, known for pushing anti-renewables legislation across the United States, for essentially undermining their own progress on clean energy. Those companies include Google, Facebook, Microsoft, Yahoo, eBay and Verizon Terremark.

In Greenpeace's 2013 Cool IT Leaderboard ranking, which ranks IT companies by their efforts to fight climate change, Google and Cisco tied for first place. The organization also has targeted tech companies in its "Guide to Greener Electronics" series. 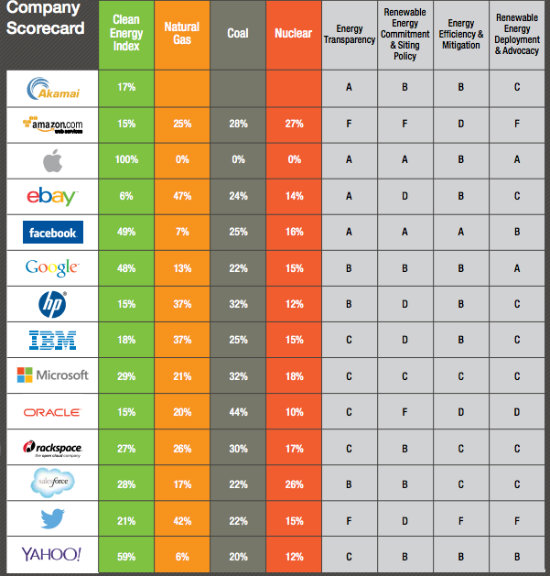 This story was updated with comment from Amazon, Apple, Microsoft and Rackspace. Top image of Ethernet cables by Panom Pensawang via Shutterstock