LED technology company Cree has been a big beneficiary of the energy-efficient lighting retrofit movement across cities, campus, offices and industrial spaces. Now it is reaching for a piece of the wireless controls market, which could grow to $2.7 billion annually by 2020, according to projections by Navigant Research.

At the center of that push is the company's new SmartCast technology, which enables automation of energy efficiency applications such as daylight harvesting or fixture dimming cycles that are triggered by motion sensors. The cost of this technology can be as low as 40 cents per square foot, deployed, about half the cost of some alternate approaches for the same applications, said Tom Hinds, Cree's product portfolio manager.

One early adopter is North Carolina State University (NCSU), which is slowly installing SmartCast in public places at its residence halls, such as in hallways, stairwells and lobbies that require consistent levels of light but aren't always occupied. The university uses the controls with motion sensing so that lights in these spaces — typically lit on a 24/7 basis by default — are turned out when no one is there, illuminating quickly when someone enters the space. In addition, the facilities team uses SmartCast to dim the lights depending on the ambient brightness coming in through the windows.

"Configuration was simple. You don't need to be an electrician to figure out how to set up the controls on a series of lights," said Pete Fraccaroli, facilities manager of Campus Life, NCSU.

SmartCast features something called OneButton setup, which gathers information across lighting networks and helps automate aspects of the setup.

Some of the initial installations of Cree's CR22 LED troffers, equipped with SmartCast, are at the university's North Hall residence. The updates are part of NCSU's ongoing strategy to ensure that all buildings perform according to LEED Silver green building parameters over time, Fraccaroli said. LED is used extensively at NCSU's Wolf Ridge at Centennial residence that opened in 2013; when it's complete, the project will use more than 4,000 Cree luminaires. 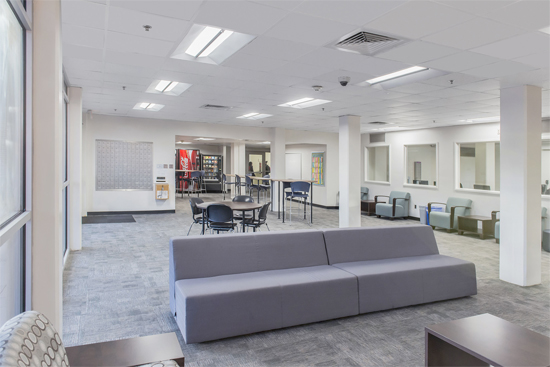 Cree estimates that Cree luminaires paired with SmartCast could result in energy consumption reductions of up to 70 percent, compared with fluorescent options. The technology is currently available for CR Series LED troffers, CS Series linear luminaires and KR Series downlights. There's also an interface that can be used with existing dimmable LED luminaires.

Cree is incorporating SmartCast as an option as quickly as possible across its product portfolio, said Gary Trott, Cree's vice president of product management, lighting.

"People have been vexed by controls," he said. "They are stunned because this technology is so simple."

All images courtesy of Cree.

Philips takes efficiency to the next dimension with 3D printed lamps