How Cargill cultivated greener soybean production in the Amazon

How Cargill cultivated greener soybean production in the Amazon

This is the second part of a three-part series from Virginia Tech examining the sustainability in the global soy market. Read the first part here.

Since Amazon forests are cleared to make way for soybean farming and cattle grazing, these land uses have been at the center of the ongoing debate about deforestation. In April 2006, Greenpeace published "Eating Up the Amazon," asserting that multinational agricultural companies financed such deforestation. The report also targeted the U.S. and European retail food industries, saying their consumers were complicit because they purchased soy-based animal feed. It further criticized the Brazilian government for lack of governance and a failure to protect the Amazon rainforest.

These concerns were legitimate and the damage to forests and brands was clear. Luckily, strategic responses were already being developed. Back in 2000, Cargill, then and still the leading global producer and marketer of agricultural products and services, began constructing a port facility in Santarém, Brazil. The new port would allow soybeans and other commodities to be shipped down the Amazon river rather than along crowded, potholed roads in trucks that sometimes waited days in long lines for their haul to be unloaded at existing ports onto ships bound for China and Europe. Licensing the new port was controversial because it was seen as the tip of the spear for rapid expansion into the rainforest. This prediction proved right — today, at least 10 more new ports are in various stages of licensing and construction.

In 2004, The Nature Conservancy (TNC), a global conservation organization, began discussions with Cargill in Brazil and with the Cargill Foundation in the U.S. to develop strategies for responding to environmental and social changes that the new port would bring to Santarém. Here's how three measures the organizations worked together to develop — standards, capacity building and landscape coordination — helped mitigate issues with soybean cultivation in the Amazon.

Early discussions between TNC and Cargill focused on developing standards for a "Forest Friendly Soy" certification. But these efforts soon were abandoned when both TNC and Cargill joined the Roundtable for Responsible Soy (RTRS), an effort led by WWF International and Unilever that began two months later. The RTRS standards require best management practices that include limits on soy-driven deforestation.

But it was unclear to TNC and Cargill what type of certification would remain relevant given that the largest increases in global consumption over the next 40 years likely would come from rapidly developing countries in Asia and the global south. Certification standards developed for European Union markets, where most soy exports had gone, might not be relevant in emerging markets where most soy exports would go. Moreover, TNC and Cargill collaborators realized that RTRS certification would not happen soon enough, and it might not be sufficient to address concerns raised by the potential explosion of public scrutiny on the new port in Santarém. So in addition to working with RTRS to abide by its standards, they also developed and pursued strategies of building capacity and adding value.

Brazil's Forest Code is one of the most progressive environmental laws in the world. But compliance has proven difficult for several reasons, notably the limited technical capacity to map a property and to measure changes in forest coverage. Beginning in 2005, TNC built a GIS database system, funded by Cargill Foundation, to map properties and monitor deforestation. The resulting geo-referenced producer and farm database used satellite images and allowed Cargill, TNC, government agencies and producers to check exactly what was happening to the vegetation cover. It also enabled Cargill to check the compliance of the soy it bought. The long-term aim of these efforts was to build technical capacity among all partners to collect, analyze and monitor land-use change, in order to comply with the forest code and other social norms and environmental laws. 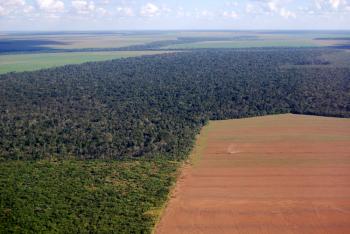 Another obstacle to Forest Code implementation was the lack of practical and affordable means for farmers to become compliant, or receive benefits for doing so. So TNC and Cargill provided free or heavily subsidized technical assistance for best management practices, and helped arrange financing for their implementation. In addition, Cargill adopted a policy of only purchasing soybeans from producers compliant with the Forest Code. Even though Cargill offered no price premium, the confidence of having a buyer assured farmers of a steady revenue stream, making it less risky to invest in becoming compliant. Cargill likewise benefits from steadily increasing production and productivity.

Key stakeholders can collaborate proactively to reduce risks and capture opportunities that create shared value. For example, TNC-Cargill's experience in the trial region of Santarém was taken to the Paragominas municipality to provide a practical solution to the federal government's demands that municipalities bring their deforestation under control. This in turn led to the creation of the Green Municipalities Program by Pará state, to which Santarém municipality later became a participant. The program provides support and incentives to municipalities that commit to bringing illegal deforestation under control. It also increased access to loans and other resources for farmers and directed land development to where it can be most productive and least damaging to regional watersheds, agricultural production and other ecosystem services.

This strategy has been the most complicated and slowest to gain traction. Stakeholders in Santarém are only now beginning to realize how to reduce risks and add value through coordinating actions across the landscape in order to manage water, erosion, infrastructure, climate, species migration and other production qualities that ignore property lines and require cross-boundary coordination. Although there are not yet plans to do so, this strategy has the potential to help producers adapt to changes in both climate and global markets, making soy production more resilient and less risky.

A decade ago, when certification was beginning to gain acceptance, few people spoke of capacity building or landscape coordination for creating shared value. Today these strategies are being replicated all over the world, including by SAB-Miller in Colombia and South Africa, and Starbucks in Mexico, Indonesia and Brazil. Lessons learned hold promise for increasing soy production, developing a local economy, feeding the world, and conserving world heritage rainforests and ecosystem services.

Deforestation: Give credit where credit is due

A sustainability journey through the Amazon rainforest