6 steps to boost innovation through mindfulness

6 steps to boost innovation through mindfulness

Cultivating mindfulness — an ability to be open to the new — is critical in a continuing attempt to turn socially innovative solutions into work that benefits those in need. More leading corporations — including Intel, Google and General Mills — are paying attention to the role that mindfulness and meditation can play in innovation.

A decade ago, I co-authored a book with Paul Nakai called "The Mindful Corporation." In it, I offered that the opposite of being mindful was being mind-filled. In a state of mind-filledness, there is no room for anything new to enter.

The paradoxical response people often have to this condition is often to distract themselves even more, with music, food, movies, the Internet, etc. When looked at from this perspective, it's easy to think this additional informational input would only exacerbate the condition — and guess what?

The more distractions you add to your mind, the less mindful you are and the more mind-filled you become. I would think at this point it would be fairly obvious why people might experience overload: There's simply no more room.

Within today's complex work environments, as well as simply staying abreast of what's going on in the world round us, we make a choice every moment — be here or be someplace else. And overwhelmingly we choose to be someplace else.

Don't believe me; try it for yourself. Try to sit still for five minutes without distracting yourself with something else. That includes telling yourself a story, making lists about what you have to accomplish, what you need at the store, how many cracks are on the floor, what sports event you want to watch, taking the wash out of the dryer — no entertainment. Okay, that last one isn't very entertaining — but it could be, especially if you're trying to be aware of all your other distractions.

Even reading this blog is a means of distraction — but don't stop reading yet.

The overfull mind misses much

Why should you care if you are mind-filled or mindful? Let's take your ability to pick up cues within the environment in which you are operating. 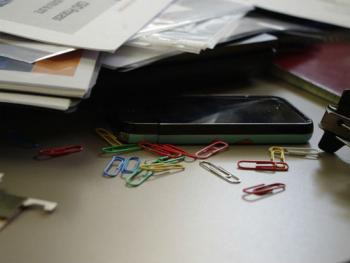 Cues point in the direction of something new about to emerge. They can show up as physical evidence, a sensation or an intuitive awareness, an expectant feeling you might get walking into a crowded room. If your mind were filled, any new information that might emerge probably would not register as more than background noise.

Now, let's extend the notion of picking up cues as the precursor to actually recognizing something emerge, as it emerges, rather than trying to track it down after the fact amid all the muddle and debris.

This is something akin to trying to figure-out a whodunit mystery in real time. Miss a cue and the mystery remains unsolved. If you aren't able to be present enough to see and feel the environment with a mind not filled by other distractions and junk, you'll invariably be surprised when you discover it was Professor Plum in the conservatory with the iPad. "Oh, that's who did it!" — after the fact.

In a business context, this is the ability to move toward recognizing an innovative idea rather than looking back and trying to figure out what just happened. Within the CSR context, if others are spending time looking back at what took place in the past and you're moving toward new solutions, who's benefitting more people?

Clear mental clutter and see what springs up

The ability to become more mindful and make space in your mind allows another profound occurrence to take place. The more you practice mindfulness, the less you become fixated on your own ideas, locked-in by your own biases. Being free from fixed ideas allows you to be more comfortable sitting with a blank canvas.

This is the open space upon which the opportunity for real innovation, something truly new and now, can emerge.

Mindfulness is not something that is simply learned. It is a practice and requires practice. One well-known technique for developing mindfulness is meditation: the act of stabilizing the mind. This is not about learning to stop your thinking, as some mistakenly purport. Rather it is about being able to watch your thoughts without holding on to any of them.

One metaphor describing the relationship between meditation and thought is that you are a mountain and your thoughts are like clouds floating by. You have no means to jump on one of the clouds or pack it away for later. It just moves on by.

Once you have received initial instruction in how to meditate, it takes practice to begin letting go of the clutter you've amassed. Mind-filled hoarding is no less an issue than hoarding material stuff in your own home. But by learning to clear some of that out, you actually discover you've created more space. 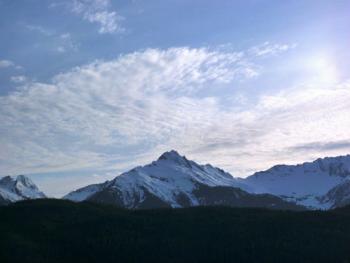 And by being able to sit within that space and not freak out because you've gotten rid of the comfort of the clutter, something rather remarkable begins to take place. Clarity begins to emerge.

When you can be comfortable simply sitting in the space of your mind while interacting with others, a variety of incredibly beneficial things take place. One is that when something emerges out of that interaction with others, it becomes evident to you and not lost amid the stacks of old New Yorkers you've carefully stored in the corner.

This ability to cue-spot, as I call it, and capture what emerges within a collaborative interaction actually requires more than just a mindful space. There are six steps within this process.

1. Mindfulness: Returning focus to the topic at hand without clinging to thoughts.

2. Awareness: Recognizing you have been pulled away from the interaction.

3. Listening: Hearing what is being said within all segments of the environment, both inner-personal and inter-personal.

4. Offering: Trusting what is known and to capture and present what has emerged.

5. Furthering: Reapplying what has emerged to deepen the conversation and afford the next level of emergence.

6. Discovery: Identifying novelty as it emerges.

Being able to capture these innovative moments, however, begins with an ability to cultivate mindfulness. It takes a willingness to not be stuck in our fixed ideas about the world we encounter.

Fostering this in our workforce and with those we serve opens the door to social innovations coming to the front of the pack, not lost in the noise. At that point of discovery, they can be nurtured, developed and actualized. The critical factor is having the space to know they are there in the first place.

If the goal is to be of benefit to others, sitting down and shutting up can be a great place to start.

Meditation image by ideldesign via Shutterstock

The Future MBA, week 6: From competition to collaboration

Understanding the root of our fossil fuel addiction

Ten Steps to Sustainable Marketing in an Uncertain Economy