After two years of researching water efficiency across a portfolio of 125 buildings, AT&T and the Environmental Defense Fund are releasing their best practices and a toolkit that other companies can use to assess performance at their own facilities.

One notable company planning to use the resource is AT&T's rival Verizon, which is training its next class of EDF Climate Corps fellows to use the technology.

"We put a lot of thought into the development of these resources with the intent of empowering people to use them on their own," said Namrita Kapur, managing director of the Corporate Partnerships Program at EDF. "It's open, so you can adjust it to your own operations if you need to do so."

Initially, EDF and AT&T are focusing their outreach on organizations and "iconic buildings" in five water-stressed metropolitan areas: Dallas, Denver, Houston, Los Angeles and Phoenix, Kapur said. "Ideally, we want to have people set goals to reduce consumption," she said. "We want to see tangible results."

The Water Management Application (WaterMAPP) is a free Excel-based toolkit that currently consists of two components, including a Water Scorecard for calculating performance based on information unique to your company as well as historical data about things like weather patterns or consumption trends.

The second piece, the Water Efficiency Calculator, can be used to run what-if scenarios that help teams consider the impact of changing settings for cooling towards or embracing alternate approaches — such as a free-air ventilation or emerging technologies for wastewater management, recycling and other conservation approaches.

The carrier is using the templates and tools in WaterMAPP to assess which investments will yield the largest water savings. So far it has seen reductions ranging from 13 percent to 40 percent, Schulz said. The portfolio of buildings for which AT&T has used the toolkit accounted for approximately half of the company's overall water use in 2010.

AT&T's overall water reduction goal is 150 million gallons by the end of 2015. AT&T and EDF believe that if a majority of buildings across the United States were optimized using suggestions or metrics from the WaterMAPP toolkit, the potential water savings could approach 28 billion gallons annually. That's about the same amount of water used in 750,000 American homes every year.

Although water efficiency isn't as widely understood — or backed with funding — as energy efficiency, the concept is getting more attention. Water scarcity now rates among the top two or three risk factors for many multinational companies, and some U.S. cities – including Denver and Dallas – have begun studying the regional implications of this issue, said Tim Fleming, director of sustainability operations at AT&T. 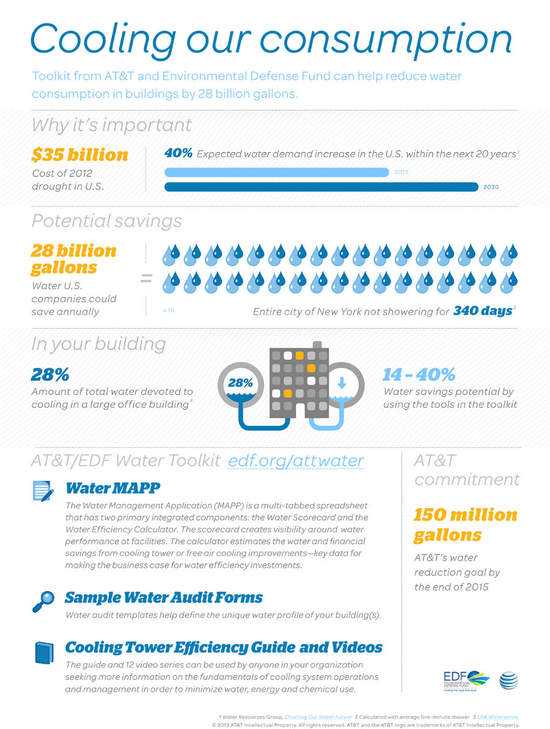 Top image of building heating pipes by Photographee.eu via Shutterstock

Climate Corps: How AT&T found 3 ways to reduce its water use

Water management: What will we think of next?