How governments fail to lead on sustainability

How governments fail to lead on sustainability

National governments must lead the transition to sustainable development, our experts say. Yet the latest GlobeScan SustainAbility Survey confirms what we all know: Governments are failing to deliver, resoundingly.

What's new about these latest findings is just how low the performance of national governments has fallen in the eyes of observers. Virtually none of our expert panel that was surveyed rates government performance as excellent, and just 3 percent give it a positive score of 4 out of 5.

In the context of typical survey error margins, you also can read this as zero. A paltry 18 percent of experts think government performance has been middling (scored as 3 out of 5). More than one-third (36 percent) give a score of 1 out of 5 or poor — the lowest on the scale. Local governments fare a bit better, with wholly 1 percent of experts allocating top marks.

Experts in Asia, led by China, are the most positive about government. But even there, where the state "declared war" on air pollution at the same time as we collected this data, only 10 percent have positive opinions of government leaders' sustainable development performance. North American experts have the most negative views. Is it just a coincidence that fossil fuel extraction and transportation issues are daily headlines in Canada and the United States?

Way back in 2009, at least 13 percent of experts globally held positive views of government leadership on the sustainability file. Of course, this was still a small proportion at the time, but even before then and still since, pretty much every major actor from business to NGOs has been calling for clarity on what the future regulatory environment might look like. Apparently, experts think that that regime will be nonexistent. Abdication is the term that will come to people's minds. Within the span of our time series data, not once has the perceived performance of national governments increased. 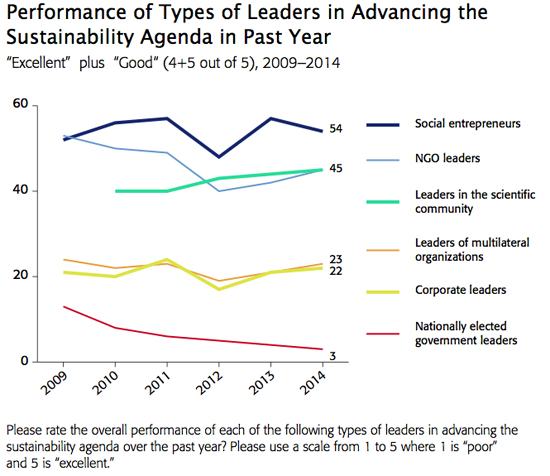 Oftentimes, those held most accountable are judged most negatively. In light of the extreme leadership that our current predicament seems to be calling for (see the latest output from the IPCC's Fifth Assessment for an easy example), these low performance scores are not surprising. But they do identify a power vacuum as an opportunity for individuals in the public sector, and their constituent movements, to mobilize. That, in and of itself, is not new. It's just that no one appears to have taken the risk to do so, even while the scientific community — tied with NGOs with the second best performance ratings — highlights the urgent need for action.

So, who is best esteemed if those who society thinks should be acting as leaders clearly are not? Speaking of opportunism and civil society, the best rated category of actors is social entrepreneurs, with just more than half (53 percent) of experts attributing positive scores on the scale. These folks, of course, are usually less bounded by bureaucratic inertia than other types of organizations. They need to innovate to succeed, and that seems to be a trait absent in many governments. But social entrepreneurs, even those that gain traction, frequently have limited influence because of the challenges related to scale.

What about large companies with easy access to capital and extensive influence over their customers, and thus the capacity to mobilize change? Two in 10 rate the sustainability performance of corporate leaders positively. Not a lot, but much more than governments. More telling is that only 8 percent of experts rate corporate leaders' performance as poor — many fewer than say the same about government. And large companies, many of whom are reimagining their business models, seem to have more potential to assume recognized leadership positions in the near term.

Finally, when asked to name a specific company that they think has done a particularly good job demonstrating leadership, sustainability experts have no problem doing so. Stay tuned for the public release of our upcoming Sustainability Leaders Survey next month, our 20th anniversary edition.

Leadership image by mdgn via Shutterstock