Technological and market forces have converged to make energy storage one of the most exciting — and potentially game-changing — opportunities for commercial and industrial facility managers, grid operators, homeowners and investors.

Forward-thinking utilities, battery suppliers, power inverter producers, system integrators and public-sector supporters are driving a massive expansion of energy storage solutions aimed at enabling the grid of the future — or even a grid-less future.

Although the energy storage value chain includes hundreds — if not thousands — of players, the following are leading the charge.

A spin-off of Carnegie Mellon University, Aquion Energy has raised more than $100 million from high-profile investors such as Bill Gates to support its planned 2014 commercial launch of its Aqueous Hybrid Ion batteries and storage systems. Aquion is targeting small- to medium-scale applications, including off-grid and microgrid installations, buildings and grid-scale storage. 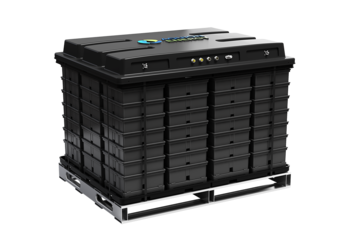 The company's nontoxic, saltwater-based batteries are designed to deliver high-performance storage while avoiding the expensive maintenance of competing chemistries, such as lead-acid.

This year, Aquion is ramping up commercial production at its manufacturing facility in western Pennsylvania. Pre-commercial products have been developed in partnership with leading inverter and electronics suppliers such as ABB, Outback Power Systems and Siemens. It will be interesting to see what role these partners play in Aquion's commercial rollout.

Since investing more than $100 million into its sodium-nickel-chloride battery plant in Schenectady, N.Y., which opened two years ago, GE has begun offering its Durathon Energy Storage Solutions for applications such as charge-discharge-cycling at telecommunications sites, firming and time-shifting for solar or wind generation, grid stabilization for network operators and building energy management for facility owners.

This month, GE announced a new microgrid demonstration project with PowerSteam Inc. in Canada's Ontario province. The project combines wind, natural gas and solar generation with battery storage and electric-vehicle charging. GE's microgrid control system determines when it's most economical to rely on resources within the microgrid and when it's better to buy power from the grid.

According to the U.S. Department of Energy's Global Energy Storage Database, GE is involved in about a dozen battery storage projects ranging from 100 kilowatts to 10 megawatts, totaling about 16 megawatts of capacity.

GE is targeting $1 billion in annual battery sales by the end of the decade.

Over the past decade, energy costs for commercial and industrial businesses in California have fallen by about 4 percent per year. So why did their electricity bills keep rising? 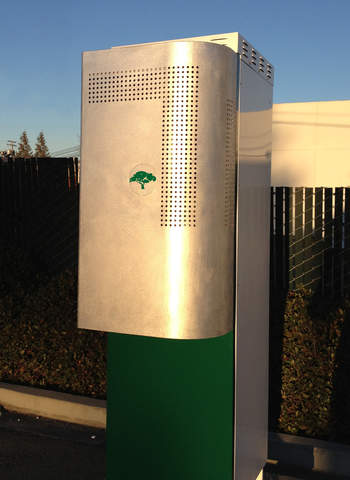 Because "power is where the pain lies," as a recently published white paper from Santa Clara, Calif.-based start-up Green Charge Networks articulates. In other words, while the cost of energy per kilowatt-hour has fallen, the cost of power per kilowatt — so-called demand charges — has more than offset that decline.

Green Charge has developed a way to reduce these demand charges with its no-money-down lithium-ion battery-based GreenStation energy storage solution for behind-the-meter projects up to 500 kilowatts. It is designed to complement onsite solar, electric vehicle charging and energy efficiency.

"We are an ESCO [energy services company] providing kilowatts instead of kilowatt-hours for the sole purpose of demand charge reduction," explained CEO Vic Shao in an interview. "Our core competency is providing software and services; we let the experts handle the hardware," he added in reference to the company's major lithium-ion battery and inverter suppliers.

Founded in 2009, Green Charge supplied its first GreenStation system to a 7-Eleven retail store in Queens, N.Y., the first retailer with distributed energy storage in the U.S. Other customers include UPS, and the California cities of Lancaster and Redwood City.

"We are no longer in a pilot phase. It's all about commercial deployments," Shao told GreenBiz. "Right now we are signing a contract every week. We have more than 20 installations lined up in California and New York in the next four months with more contracts underway."

LG Chem, a subsidiary of South Korea's LG Corp., stands apart from most other manufacturers of lithium-ion batteries for stationary applications. Navigant Research ranks the company as the world's No. 1 lithium-ion stationary battery vendor.

Given this primacy, it's not surprising that many leading developers of stationary storage systems are partnering with LG Chem. Building on its experience supplying lithium-ion batteries for electric cars, LG Chem is providing residential, commercial and industrial stationary batteries as well. For example, leading solar inverter manufacturer SMA Technology AG this year plans to launch its new Sunny Boy Smart Energy Home Manager, with LG Chem's lithium-ion batteries at the heart of the system.

The company also is supplying large-scale storage systems to the U.S. market to companies such as AES Energy Storage, Southern California Edison and the Snohomish County Public Utility District.

With its acquisition of A123 Energy Solutions — the storage business of A123 Systems — for approximately $100 million, NEC Corp. of Japan claims to be the world's leading supplier of lithium-ion battery storage systems. A global Fortune 500 company, NEC also has the resources to grow its energy storage business geographically across all storage market segments.

The newly formed company — to be called NEC Energy Solutions — will begin operation in June.

NRG Energy's battery storage activities are as diversified as its power generation and retail electricity businesses. 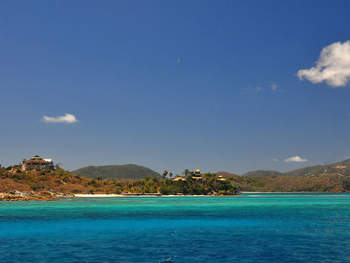 Battery-backed renewable energy will play a key role in the "post-grid future," NRG Energy's chief executive David Crane recently wrote in a letter to shareholders. "We are just getting started in this area with, among other projects, our ground-breaking Necker Island announcement, but we expect to be a leader in the area of renewables-driven ecosystems," wrote Crane.

On Necker Island, part of the British Virgin Islands, NRG is replacing diesel generators with a microgrid that includes photovoltaic (PV) panels and lithium-ion batteries. The project is a partnership with business icon Richard Branson, who owns the island.

It's not the company's first battery-backed solar project in the Caribbean. Last summer, NRG and Sunora Energy Systems — its joint venture with PV wafer producer GCL-Poly — delivered a 100-kilowatt solar array with battery backup at a hospital in Haiti.

The company also is exploring vehicle-to-grid (V2G) applications, for example, through the Grid on Wheels project in Delaware. The project features 30 electric BMW MINIs and V2G aggregation software from the University of Delaware that NRG Energy plans to drive into the marketplace through a joint venture with the university called eV2g.

In addition, NRG is involved in large-scale storage through its investment in Eos Energy Storage, a startup developing a zinc-hybrid-cathode battery technology it calls "Zynth."

Princeton Power's inverters are designed for operation with a variety of battery chemistries and the company offers its own turnkey systems for microgrids, backup power, grid frequency regulation and other applications.

Earlier this year, Princeton launched a partnership with lithium-ion storage company Coda Energy Holdings to supply inverters and energy storage systems to commercial building operators in the Northeast and California. Their aim is to help reduce demand charges for commercial buildings.

According to the DOE's energy storage database, Princeton Power's inverters are being used in at least two dozen grid-tied battery storage projects around the U.S., including projects with Coda Energy, GE, Solar Grid Storage, SolarCity and Tesla.

8. Solar Grid Storage: A match made in the heavens 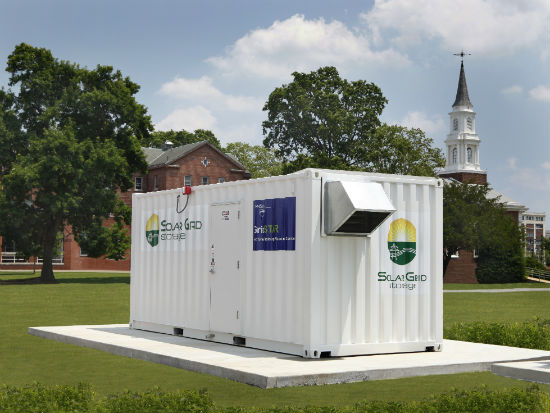 The company targets projects in the range of 150 kilowatts to 10 megawatts with its PowerFactor system, which includes lithium ion batteries and power inverters. The company's standard financing offer is to own and service the system on behalf of customers, including solar installers such as Advanced Solar Products, groSolar, Standard Solar, Solaire Generation and Solis Partners.

According to the DOE's global energy storage database, Solar Grid Storage has five 250-kilowatt projects operating within the PJM Interconnection.

9 and 10. SolarCity and Tesla: A dynamic duo

SolarCity, the largest residential PV installer in the U.S., is rolling out storage systems in California that rely on lithium ion batteries supplied by electric carmaker Tesla — whose CEO and founder, Elon Musk, is also SolarCity's chairman. The duo's entry into stationary energy storage is another signal that solar-plus-storage is gaining traction. 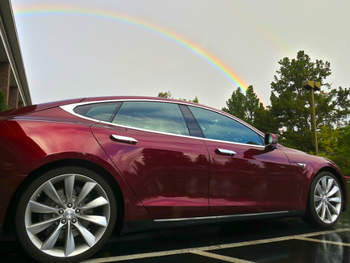 In residential applications, SolarCity's system is used only to back-up critical loads. SolarCity hopes to offer its solution to enable residential customers to take advantage of time-of-use rates, ancillary services and PV system interaction — but California regulators currently do not allow it.

SolarCity also is spearheading a 200-kilowatt project to store energy from rooftop solar arrays at Tesla's factory in Fremont, Calif., with the aim of helping Tesla offset millions of dollars in demand charges.

The bigger impact on energy storage could come from Tesla, which recently announced plans to launch a massive factory for U.S.-based lithium ion battery production, the so-called Giga Factory.

11. Sonnenbatterie: From Europe with love

Already with thousands of units deployed in Europe through major utilities such as RWE and E.ON, German company Sonnenbatterie recently announced a partnership with Los Angeles-based SK Solar USA to launch its lithium-iron-phosphate battery system in the U.S.

According to Boris von Bormann, country manager of Sonnenbatterie North America, the company plans to launch its residential system in the U.S. later this year and its commercial system in 2015.

Sonnenbatterie could be the first of several German storage integrators expanding into North America.

Watch them carefully. Their efforts could change our energy horizon.