As communities across the United States continue to fall victim to drought, coastal flooding and other impacts of extreme weather and climate change, leaders at the local and federal levels are beginning to take action. Local elected officials are signing pledges to create more climate-resilient communities — such as the Resilient Communities for America Agreement — and moving forward with other adaptation initiatives. The President's Climate Action Plan (PDF) outlined several greenhouse gas-reduction initiatives and established a Task Force on Climate Preparedness and Resilience (PDF) to support communities at the frontlines of climate impacts. Yet an essential piece is still missing when it comes to comprehensively addressing climate change — Congressional action.

Three upcoming events, however, suggest that in at least one U.S. state, Congress may be starting to shift its attention to climate impacts.

On Tuesday, the 44th anniversary of Earth Day, Florida Sen. Bill Nelson chaired a U.S. Senate Subcommittee field hearing in Miami Beach, Fla., on the coastal impacts of climate change. Today, Rep. Joe Garcia will host a panel on climate change, bringing together Florida business and community leaders to discuss the economic impacts of sea-level rise and extreme weather. And on April 25, Sen. Sheldon Whitehouse will wrap up his national tour discussing the impacts of sea-level rise and climate change, ending with an event with other elected officials and scientists in Miami.

The events taking place this week in Miami highlight that while sea level rise affects coastal communities throughout the United States, Florida is considered the most vulnerable. Miami is ground zero  — it's the city with the largest amount of assets in the world (PDF) that are threatened by sea level rise and coastal flooding.

Take a look at the facts illustrating just how much Miami-Dade County is being affected by hurricanes, sea-level rise and increased coastal flooding. Climate change already is amplifying some of these events, and future warming only will increase the risk of more frequent and severe impacts to the area's economy, infrastructure and communities.

• Miami Beach is already experiencing prolonged and frequent flooding after strong storms, due to sea level rise. Officials have responded by investing $400 million to renovate the city's drainage system. 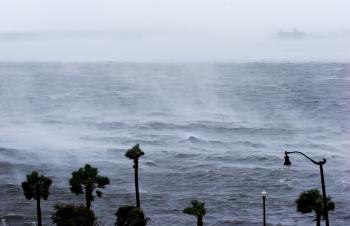 • With sea level rise of only 3 to 9 inches, Southeast Florida could lose 70 percent (PDF) of its drainage capacity in the 28 control structures that protect the region from flooding and saltwater intrusion. Adapting to this flooding may require high-capacity pumping stations, which cost about $70 million each.

• Hurricanes hitting Miami-Dade County between 2004 and 2005 caused more than $3 billion (PDF) in damages.

The threats facing Florida clearly are significant, and the increasing attention the state is receiving from Congress is encouraging. The scope of climate change impacts, however, extends well beyond the coastline of Florida to communities throughout the United States.

The impacts of Hurricane Sandy were amplified by sea level rise, and sea level rise due to climate change has doubled the probability of a Hurricane Sandy-like flood compared to 1950. Every region in the United States has experienced (PDF) an increase in extreme precipitation events since 1958, while the western United States now sees seven times (PDF) the number of large-scale wildfires it did 40 years ago. And studies show that several recent droughts in the United States are more likely (for instance, the 2011 Texas drought [PDF]) and more intense (such as the 2013-2014 California drought) due to human-induced climate change.

Congressional attention this week on Florida's sea level rise is a step toward overcoming the state's climate change challenge, but it's important that it's followed up with comprehensive action. Florida's coastal communities need all levels of government — from local officials in Miami Beach to the state's full Congressional delegation — to mobilize resources for wide-ranging adaptation and mitigation measures. By acting as leaders on climate action, Florida's decision-makers not only can protect the state's vulnerable citizens from the dangers of climate change, they also can inspire communities across the United States to follow suit.