Scientists tell us that sea levels are rising as the oceans warm and as glaciers melt, but we don’t have to rely on satellite measurements to perceive the change. Streets and yards, formerly dry, now flood regularly during monthly high tides in some low-lying coastal areas around the country. So is sea level rise a material business risk?

The business community understands that managing risk is critical, and that it requires understanding, assessing, and prioritizing among a multitude of potential risks. Of course, not all risks are created equal. Some can be easily managed, and near-term risks attract more attention. That said, we don’t (or certainly shouldn’t) ignore longer-term and more uncertain risks. Low probability outcomes (risk = probability x consequence) can still be disasters waiting to happen.

Thus, we don’t design buildings for the “10-year” earthquake. We don’t design offshore oil platforms in the North Sea for one-in-100-year waves; we design them for one-in-10,000-year waves. We don’t buy fire insurance because we “expect” something to burn down, but because it “could” burn down with financially ruinous implications. In other words, we’re risk averse. But note that unless we understand what “could happen,” it’s hard to act in ways that reflect that risk adversity.

When it comes to the risks of sea level rise, the recently released Fifth Assessment Report from the Intergovernmental Panel on Climate Change seems like a likely place to look for an answer. Surely, the IPCC discusses future sea level rise? It does indeed, projecting 10 to 32 inches of global sea level rise by 2100.

But in interpreting this projection we should ensure that the business question we are asking — Is sea level rise a business risk over business-relevant time frames? — is really the question the IPCC is answering. And we quickly see that it’s not. The IPCC’s message, paraphrased, is this: “Based on the physical processes we understand with a high degree of confidence, we project 10 to 32 inches of sea level rise by 2100.”

That’s a forecast, a prediction. It’s not a risk assessment. Risk, which is a function of probabilities, uncertainties, and consequences, is more about “what could happen with what consequences” than about prediction. 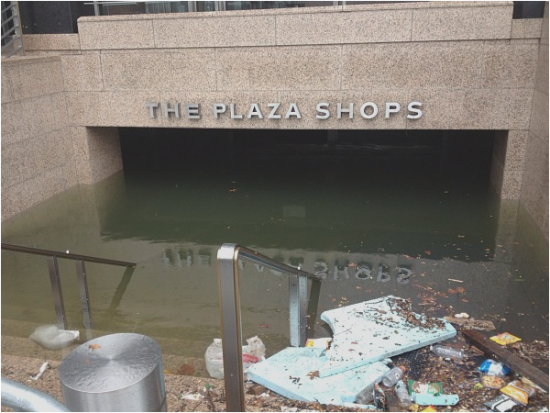 Indeed, the IPCC’s report notes that we do not sufficiently understand several physical processes to confidently include them in the 10 to 32 inch projection. Most significant among these “known unknowns” are the rates at which ice sheets in Greenland and the West Antarctic will melt. Some ice-flow experts are already quite nervous about what might be happening where those ice sheets meet bedrock; they are wondering whether their rate of flow into the ocean will accelerate rapidly as warming oceans from below and melting ice water from above “grease the skids.”

To frame the potential business risks of sea level rise, it’s helpful to review what IPCC scientists tell us we know about what’s driving global change:

• We know that the atmosphere is changing at a far faster rate than has occurred in the past, raising questions about how accurate a predictor the geological record is. Note that the rate at which greenhouse gases from human activities are trapping new heat in the atmosphere is equivalent to the heat released by four Hiroshima-sized atomic bomb explosions every second, 24 hours a day, 365 days a year.

• We know (because it has happened before) that global sea levels will rise more than 200 feet if the warming of the planet goes unchecked (when all the ice melts). And we know that sea levels have sometimes risen very rapidly in the past (e.g. 65 feet in 4 centuries about 14,000 years ago) even in the absence of human activities.

• We know that Greenland and West Antarctica are particularly vulnerable to ice loss, having fluctuated historically between being buried in ice and being ice free, and that they currently store enough water to raise global sea levels by 40 feet. 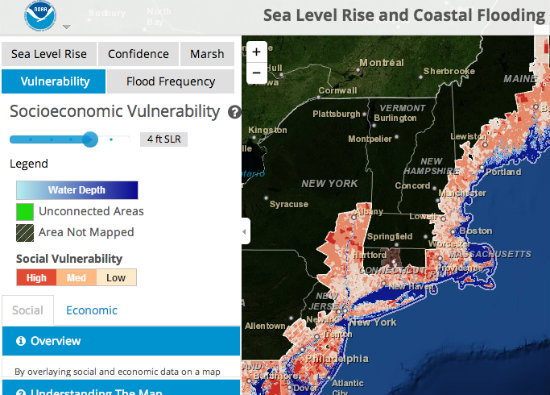 The IPCC’s 32-inches-by-2100 upper-bound estimate of sea level rise does not incorporate what would happen if those ice sheets melt more quickly than the IPCC feels confident predicting they will. The IPCC isn’t charged with assessing worst-case scenarios, but leading climate scientist James Hansen estimates the worst case at about 16 feet by 2100.

While that worst may be a low probability outcome, the potential consequences are so large that the business risk (probability x consequence) is far higher than we generally recognize. With most of the world’s major cities located along coast-lines, even 1 to 3 feet by 2050, combined with extreme storms and high tides, would overwhelm most coastal defenses and create tremendous losses; 2050 is well within the planned life of much of today’s coastal infrastructure.

We are not saying that we should assume a worst-case scenario. But all of us consider it natural to be risk averse about our health, our house, or our business, routinely managing such risks through prudent planning, insurance, and building codes. Given that we only have one shoreline, shouldn’t we be risk averse when it comes to sea level rise?

We need to engage in the same kind of risk-based conversation around sea level rise that we do for many other risks when we think about what “could” happen, not what we’re confident “will” happen. Only then can adaptation planning deliver on its risk management promise for municipalities as well as individual companies. So don’t misinterpret the IPCC’s projections — they are not assessing your business risk.

Be prepared: Energy, food and medicine at risk from rising seas, engineers warn